“I am an entertainer, not a politician. I love making people happy,” says the California Central Valley native

From purchasing opponent website domains to receiving a “Super-PAQ” endorsement, Ryan Ozminkowski ’19 has become a campus sensation in this past week’s USG presidential race. Here, the co-founder of Princeton Tonight who has never before held a position in USG sits down with The Tab to discuss his motivation, experience, and vision for leading one of the largest student organizations in the university community.

Tell us who exactly is Ryan Ozminkowski?

Ryan grew up in a small agricultural town called Lodi in Central Valley of California. My father is a tomato breeder for Heinz ketchup, my mother a stay-at-home mom. I come from a very standard family and built haunted houses and played soccer growing up. I’ve always wanted to become an engineer, but later had some amazing English teachers. Here I am as a philosophy major and a student athlete at Princeton. 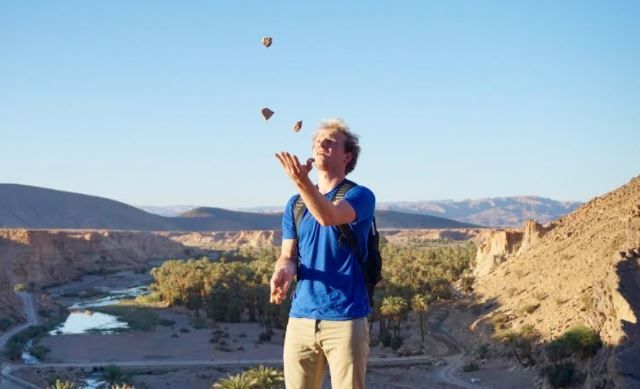 Are you serious about your campaign?

Yes, it is a one hundred percent real campaign. It is a fun campaign. The point is that a lot of people don’t really care about USG. It’s a very insular group. A lot of people don’t vote, they don’t have access to USG. If I wasn’t running, it would be two candidates running who are both qualified, but just arguing over who’s more qualified.

So you really want the job?

Yes, entirely. I one hundred percent want the job. If 5,000 people elect you to do a job, that’s your number one obligation. If that requires sacrificing classes or extracurricular activities, I’d do it.

As you mentioned, it’s been a “fun” week. Where did the inspiration for all of this come from? Let’s start with buying domains.

Well, this is a parody of what actually happened in politics in 2015 when then Republican presidential candidate Jeb Bush’s website went down for a minute and the link re-directed to Trump’s campaign site. Jeb’s website URL has expired and was not renewed. We thought it was a funny, silly way to play it off. It’s weird that people got offended by it. It certainly wasn’t like we bought 2,000 domains for both of them, it was just one for Rachel and one for Matt. Honestly, you can buy domains for anything. We bought the domains a month ago when we knew Rachel and Matt were running and thought it’d be a nice parody.

How did you buy the domains? Did it cost much?

No it didn’t cost much at all. But this suddenly got people talking, especially among athletes who saw the news about “domain-gate.”

So you suggested that there can be a parallel drawn between your campaign and Trump, is that how you want to be perceived?

No, absolutely not. Absolutely not. It’s just a reference to national politics. We just want people to be engaged, not just websites with platforms but something people can laugh about. Unfortunately one of the candidates got a bit upset by that, but there are still thousands of other reasonable domains they can buy.

So what about the Liberty Meets All Opportunity PAQ? Who came up with that idea?

Honestly, that’s not part of our campaign.

Do you know who is involved in that PAQ?

I do now. Because the Prince totally misquoted me. The reporter texted me and asked do I know Ben Sender, I responded that I know the name, but I’m not sure I know who he is. But the next day, it came out that Ryan confirmed Ben is in charge of the Super-PAQ. I totally did not know who he is. I was absolutely not involved in the creation of this Super-PAQ.

So you didn’t know that the PAQ was going to endorse you?

I was surprised. So they endorsed myself and Rachel. And it is so cool. And did you hear about the charity raffle they are doing? Peter Singer even forwarded an email out onto the listserv. They will be donating $500 to charities most voted upon. So it’s pretty cool that out of this campaign, there will be $500 donated to charities – the first ever collegiate super-PAQ in America.

How many people are helping you on your campaign?

I’d rather not say. There are plenty. But we’ve never asked anyone to vote for us.

Needless to say, everything you are doing is very time-consuming, why are you doing this?

I feel a degree of obligation to it. Personally, I love elections. It’s so much fun. The far more important thing is that if I wasn’t running, no one would care. A lot of friends of Rachel and Matt would care for sure, but it’ll just be a debate over platforms that are non-controversial. The winner will just be the person who put up posters more. But we thought: how can we challenge that? How can we redefine what collegiate elections can be? At the last USG presidential debate, only around 40 people showed up, and I was told that’s a good turnout. So I said, let’s challenge this, let’s do an inaugural late meal debate at 8:30 pm Monday evening where everyone is gathered up.

On that note, I love entertaining. I am an entertainer, not a politician. I love making people happy. I also truly feel like I can do a good job. Princeton Tonight has done so much. We got the best musicians to come here, Art Garfunkle, for instance, we got him to come for free. I feel that two and a half years in the “private sector” so to speak, building from the ground up to an organization of over fifty people from editors to marketing and finance talents is lot of accomplishment.

What are your top three items on the agenda if elected USG president?

This goes back to my campaign being out ideals and not ideas. Every USG election, candidates have mostly debated about noncontroversial issues. My campaign is about a greater vision. Firstly, I want everyone to share the love for Princeton that I have. Two, I want this cabinet created in a way that anyone who wants to be involved can get a seat at the table. Three, I just want more fun and less stress. Go spend more time with your friends! This is college.

The election is only going to last for a week or so. If you are elected USG president, at the end of the day, it is about you sitting at the table and working on those serious issues. How do you feel about that?

No one brings up controversial issues in USG. It’s always about late meal for upperclassmen, better lawn parties, inclusiveness, people aren’t talking about tax reform or immigration. You’d be a jerk to oppose things like mental health. On the other hand, no one who will serve as president can know everything. If there’s a list of sixty items on the agenda, which include for example, the Honor Committee, I would be wrong to say I know everything. A good leader will bring people together. That’s the reason behind my cabinet. Let’s have athletes, ROTC members, and the marginalized groups have a seat at the table who are passionate about the issues.

How would you respond to criticisms that you’re not serious or respectful about issues like mental health?

So I want to make a couple things clear. First, we are the only campaign that hasn’t said anything bad about anyone. There was a column that someone wrote that questioned my moral fiber, and the only response we’ve had is from my roommate who saw that and said this is wrong. People have said very negative things about us, but we refuse to say anything bad. Second, to important platform issues, that’s the point of the cabinet. On mental health in particular, I think Rachel Yee’s platform is brilliant, and I undoubtedly would have her on my cabinet.

How would you feel if you don’t get elected?

I guess we’ll find out. There may be some disappointment, but I would’ve been able to give USG a week of fun.

You mentioned inclusion a lot in your campaign. Did you feel like you didn’t fit in at Princeton?

As an athlete, even though I felt I was prepared academically, I still questioned it. Of course you had a likely letter and a coach who recruited you, but the second you are recruited for track, you question, do I really belong here? I didn’t know what Philips Andover or Exeter were before coming here. It’s a different world. I know there are assumptions people may make about me, but they don’t know who I am. I don’t come from exorbitant amounts of money or anything like that.