Zodiac Heads return to campus. This time they’re near the Dinky Bar.

Forbes still not worth the walk

The twelve zodiac statues that towered in front of the Wilson School from 2012 until July of this year reappeared on campus Friday. The dragon, bull, and other animals — designed by Ai Weiwei as a critique of Chinese nationalism — will now guard over the Dinky Bar.

Only six copies of the 10-foot bronze sculptures were created, and sets have sold for as much as $5.4 million, making them Ai’s most expensive creation. Before its move, the set at Princeton had been on display in the same location longer than any other set, according to an article by The New York Times last year.

Zodiac Heads, also called Circle of Animals, is on loan from an anonymous alumnus. The loan was set to expire in December 2016, but Lisa Arcomano, manager of campus collections, said in July that the exhibit may last for another three to five years in its new location.

They were relocated in part because spray from the Wilson School fountain was causing oxidation, according to a University contractor. 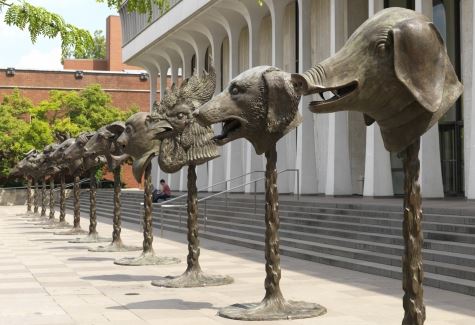 The Zodiac Heads stood in front of the Wilson School until July.

Their creator, Ai Weiwei, served as artistic director for the “Bird’s Nest” stadium that held the opening ceremony in the 2008 Beijing Olympics. Ai, an open critic of the Chinese government and its human rights record, was held in Chinese custody for 81 days in 2011, shortly after the zodiac sculptures were created.

The sculptures now stand in a circular arrangement as Ai intended. No word yet on whether he prefers their new proximity to a bar.