The University has just released a statement about this event. The full text from Michele Minter, Vice Provost for Institutional Equity and Diversity is below:

“On the evening of May 11, the Department of Public Safety received a call complaining about excessive noise at a party in a student dormitory room in Henry Hall. DPS responded promptly to the call and found that there was excessive noise. DPS was unable to locate the residents of the room and, because the party was unauthorized, it was closed down.

“A number of students have reported that some of the conduct at the party was offensive to many members of our community and contrary to our community values of inclusivity and respect for others. The reported lack of regard for the sensitivities of others is disturbing and distressing, and my office, along with the Office of Campus Life and others, will be seeking further information to determine whether additional actions need to be taken either in response to this event or to communicate our values and expectations more clearly and more effectively.

“I encourage anyone with information about this event to contact me directly. “

A Cinco de Mayo themed party at Princeton has caused uproar on campus.

A party of over 50 guests held last night has ignited controversy as partygoers wore sombreros and chanted “piñata.”

This clip of the event was uploaded to Princeton’s Young Democratic Socialists’ Facebook:

Posted by Young Democratic Socialists of Princeton on Thursday, May 11, 2017

According to a statement released by Princeton University Latinx Perspectives Organization, both party hosts, whose dorm was used to hold the event, uploaded images of themselves in “racist” dress.

“Some of the behavior at the party included members of the party shouting ‘piñata’ various times throughout the night and individuals wearing tacky sombreros… This incident may not come as a surprise, considering that both party sponsors, whose dorm was used to host the party, have images on their Facebook pages in racist dress with ponchos and sombreros or posed with individuals in racist dress from past parties. When an individual in solidarity with PULPO and Latinx students entered the party, he was shortly escorted out of the room by a group of white men. They proceeded to ask for his phone and a member of the party attempted to forcibly take it when said individual declined.

“Furthermore, to our serious concern, about thirty attendees of this racist party congregated outside of the dormitory and proceeded to interfere with a group of Latinx students. After several exchanges were made from both parties, a party attendee followed Latinx students as they left screaming offenses, including ‘you fucking Democrats.’ Additional screaming and offenses were targeted at the Latinx students, only to be restrained by other party goers.

“This party also exhibits how University officials have double standards when enforcing their policies. Shutting this party down took several calls to Campus Public Safety…

According to Assistant Vice President for Communication Daniel Day, campus police officers responded to the party straight after a noise complaint call came in at 10:53 p.m.

The caller said there was loud music coming from a room at Henry Hall, he told The Tab. The University is expected to issue a comment later regarding the event.

Reports of this party came after multiple emails sent through residential colleges cautioned them against planning or attending social events with “harmful themes.”

The same email were sent by other residential colleges. Part of the email reads:

“As the close of the academic year draws near, I understand that many events will ensue. I wanted to share some tips and reminders to create a fun, safe and inclusive experience for all students. As you plan and/or attend social events and parties, please be mindful of harmful themes and participating in actions that may objectify and denigrate the cultural and social identities of others.  Equally important, I ask that you are mindful of the impact that such events and actions have on members of our community.”

The party was allegedly held by members of a men’s sports team. However, in a social media post, a student apologized for allowing her room to be used for a party and stated she was not aware of it nor agreed with its theme.

We have reached out to members of this team for comment.

Initial news of the party stoked heated conversations. While some students expressed outrage at its racial and cultural insensitivity, others decried such reaction as manifestations of an overly politically-correct environment. 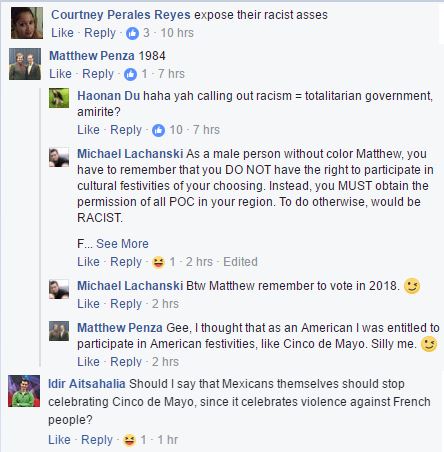 “This event, others like it, and the lack of adequate University responses to them are indicative of a larger pattern of discrimination, erasure and hostility on this campus toward people of color beginning first and foremost with an institution which has yet to make a stand in favor of the humanity,” says Tlaloc Ayala, a sophomore.

“It’s a holiday. People get together, have a few drinks and relax. This place is stressful enough without the PC police calling for punishment of those who wear the wrong kind of hat. Believe it or not, everyone’s actions have consequences, and we need to be cognizant of that. Who the hell do you think you are to threaten people with consequences? Get the fuck outta here with your self-righteous bullshit. Tell you what? I’ll wear a sombrero, a kimono, and shove a Venetian gondola up my ass all at the same time.”

Noah Mihan, a sophomore, also expressed frustration about the reaction to the event. He explains:

“It’s very counterproductive to discussion when I state my position and I’m told that I “don’t have a place in this discussion” and wouldn’t understand the issue because “you’re white.” I feel that, if the hockey team was wearing brown face or shouting chants about the wall or Trump, then there would definitely be room for this sort of outcry. There seems to be selective outrage about events like these. Why, for example, isn’t there similar outrage when people dress up in green leprechaun hats and drink beer for St. Patrick’s day?”

This story will be updated.