An anti-Semitic flyer has been found plastered on Princeton’s Center for Jewish Life.

A caller warned PSafe that someone wearing a ski mask and dark clothes was seen taping up the flyers.

Princeton has sent out a campus alert about the incident, saying: “Princeton is committed to protecting and promoting free expression, but it regards actions that are threatening or harassing based on identity as serious offenses. These flyers were contrary to the values of the University, which seeks to create and maintain an environment free from discrimination and harassment. Princeton attaches great importance to mutual respect, and we deplore expressions of hatred directed against any individual or group.”

Hours after Princeton announced its investigation in an email, a white nationalist group named Vanguard America tweeted out a flyer containing anti-Semitic and anti-immigrant comments. One such flyer was allegedly found on Princeton’s campus Wednesday.

A twitter account by the name of Vanguard New Jersey also tweeted to Princeton a fabricated picture of a newspaper article containing a picture of Adolf Hitler.

The group disseminated flyers in Rutgers University in February.

In an interview with The Tab, a member of Vanguard America claimed that the organization is indeed responsible for the flyers.

“We also decided to put flyers up at Princeton to remind those at the university that the student body was once comprised of proud White Americans,” the member said.

However, he can’t comment on whether or not the poster is associated with Princeton as a student, staff or faculty member.

“We take the anonymity of our members very seriously,” he said. However, he confirmed that all involved in posting the flyers on college campuses were members of Vanguard America. This particular flyer is not publicly available on the organization’s website, he says.

If you have a picture of these flyers, please contact us.

Daniel Day, a spokesperson for the university, said that no suspects have been identified yet. Multiple faculty members on campus have shared words of solidarity against these messages Thursday afternoon. 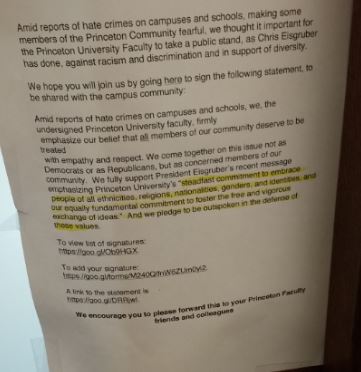 An open letter found outside an office in East Pyne