“The Resources Committee was presenting an update, not a decision. They will continue to consider this proposal for the months to come.”

His comment came after over 200 affiliates of PPPD staged a walkout and teach-in during the Monday CPUC meeting following a presentation by Professor Michael Littman, a member of the Resources Committee. Littman had stated that his Committee had not found PPPD’s proposal “persuasive” at the time to recommend action.

“Professor Littman was presenting an update, not a decision. There was no decision announced by anyone – by the president or by the Resources Committee,” said Durkee. Durkee had previously told The Tab that Princeton has not invested in private prisons or has any intention to do so. 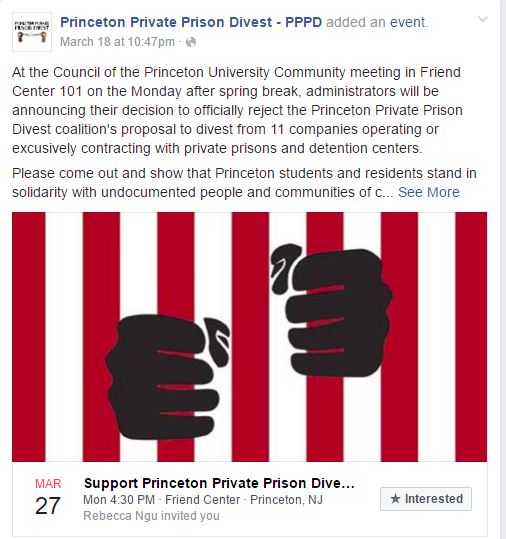 The Resources Committee, consisting of eight faculty members and students, only asked PPPD to provide the committee with additional information, Durkee said. He also explained that the Committee had already scheduled two meetings later this year and was looking forward to the CPUC discussion to help inform its thinking. Furthermore, Durkee said the Resources Committee had no authority to accept or reject divestment proposals; these decisions fall in the jurisdiction of the Board of Trustees.

Durkee also stated that there was never a vote among the Resources Committee on the proposal. The eight members had different reasons behind their reservations to recommend the proposal, he said. He further explained the Resources Committee, which usually gives an update at the May CPUC meeting, moved up the discussion to this past Monday so there could be more community response and action during the remainder of the school year.

However, Eliot Callon, a spokesperson for PPPD, stated that Durkee’s remarks do not present a fair or accurate picture. According to Callon, the Resources Committee had on multiple occasions told PPPD that its proposal did not meet the “high bar” to make a recommendation. During the last meeting between PPPD and the Resources Committee, PPPD was told that they “can come back next year.”

“That was a clear rejection to us,” Callon said. She further stated that Durkee’s comments reflect a degree of backtracking on part of the University.

She also explained that the semantics of the Resources Committee’s actions is irrelevant.

The situation at hand is analogous to the Darfur divestment proposal, Durkee said. That proposal was ultimately honored by the Board of Trustees, which decided to set a policy of dissociation from companies that were directly or indirectly involved in the genocide.