Princeton has not invested in private prisons and has no intention to invest in them, says Vice President Bob Durkee

Princeton has not invested in private prisons and has no intention to do so, says Vice President Bob Durkee in response to an inquiry from The Tab.

More than 200 students, faculty members and researchers packed the room during Monday afternoon’s Council of the Princeton University Community meeting where President Christopher Eisgruber and the Princeton Resources Committee rejected a proposal to divest from private prisons.

The proposal came from the Princeton Private Prison Divest Campaign. The group had initiated an undergraduate and a graduate referendum in the past year. In both cases, the referendums had garnered over 85 percent support among those who voted. However, the undergraduate referendum failed to succeed due to an insufficient number of voters specified by Undergraduate Student Government policies. PPPD also initiated a faculty petition which had received 180 faculty signatures from over 40 departments. The group also actively worked with the Resources Committee last year, per its website.

After learning that the Resources Committee had unanimously voted to reject their proposal, members of PPPD called for a demonstration of solidarity at the CPUC meeting over social media. The group had asked for the decision to be articulated publicly and penned a letter in the Daily Princetonian Monday morning.

“Today, the University announces its decision to continue funding for-profit prisons and immigrant detention centers. The University thus defends its complicity in institutional violence against the nation’s most marginalized communities,” the column reads.

Yet, while articulating his decision, Princeton president Eisgruber remarked that in a departure from past practices, he will discuss Princeton’s investment portfolio pertinent to this petition. The University current does not have any assets in the 11 for-profit prisons listed in PPPD’s petition, he said.

Following Eisgruber’s remarks, Princeton professor Michael Littman stated that the proposal in its current form did not meet the high bar to recommend action, partly due to “insufficient evidence.”

After their remarks, PPPD held the floor to express its frustration with the University’s decision, calling the events happening in the meeting room as a “charade.” The group subsequently staged a walk-out and teach-in featuring journalist Chris Hedges, who has taught at a maximum-security prison. 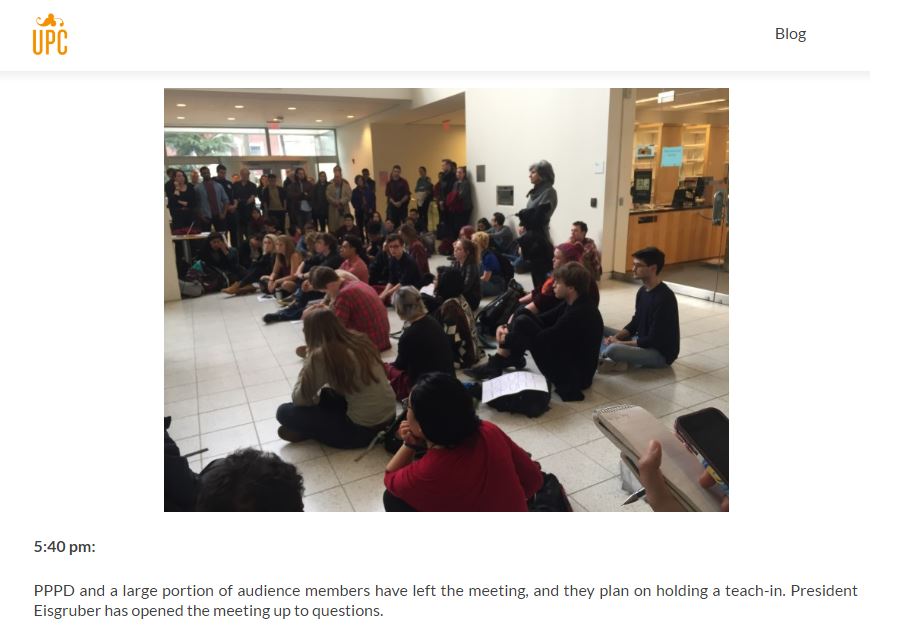 When asked further by The Tab about the absence of current investment from Princeton in for-profit prisons, Durkee reaffirmed Eisgruber’s statements.

He further noted that this same situation applied when Princeton “divested and disassociated” from companies that were found to be contributing to genocide in Darfur.

“At that time, Princeton had no investments in any of those companies, but the policy provided that there could be no future investment in such companies,” Durkee added.

The University has not communicated that it did not invest in for-profit prisons prior to Monday’s meeting.

In their divestment proposal, PPPD had noted that “the privatized prison and detention industry […] is the only one which PRINCO is likely invested in and thus that which we must divest from.”

“In introducing the discussion at today’s meeting, the President thought it important to clarify that investment in for-profit prisons is not the case, while also clarifying that the Resources Committee is continuing to consider this issue, and saw today’s meeting as a chance to hear from other members of the University community,” Durkee noted.

Eliot Callon, a spokesperson for PPPD, noted that today was the first time when her group was told that the University did not invest in private prisons. Over the course of the past year, her group had repeatedly asked the Resource Committee about its association with private prisons but was never given a definitive answer.

“I was shocked and confused to hear that,” Callon said, “We find it very unfair that the administration would tell us this information today, after they met with us so many times and so many of us had put our hearts into this campaign.”

She further noted that PPPD does not take Monday’s events as a legitimate response until there’s substantive proof.

“It’s not clear whether by ‘does not invest,’ Princeton is actually indirectly investing in a for-profit prison such as through a mutual fund,” Callon noted.

Callon also explained that despite Eisgruber’s remarks at CPUC, PPPD will continue its campaign. Her coalition is hoping for continued conversation with the administration and an audience present at the Board of Trustees meetings. The campaign may also shift towards a more radical approach like the one that prevailed at Columbia University, Callon said.

“The administration owes it to the Princeton community to explain why they are so resistant, time and time again, to divest.”