Financial aid won’t be affected, but it’s a different story for research

As Trump’s ‘America First’ budget proposal drew questions and concerns across the country, The Tab takes a closer look at the ways that funding cuts could impact Princeton – specifically in its ability to provide financial aid and support faculty research.

Per statistics provided by Assistant Vice President for Communications Daniel Day, Princeton students collectively receive nearly $5.8 million in Federal Financial Aid. From that, $3.5 million come in the form of Pell Grants while another $975,000 is provided through federal work study programs. On average, about 650 Princeton students are offered federal work-study programs each year. In his budget draft, Trump outlined “significant cuts” to federal work study arrangements while leaving appropriations for Pell Grants intact.

Trump’s budget also revealed plans to eliminate the Federal Supplemental Educational Opportunity Grant (SEOG), an initiative that reserved for students with the greatest need for financial aid. The number of candidates eligible is at the discretion of each institution. Princeton received $1.23 million in SEOG grants, also known as campus-based aid in 2016.

Even if cuts to programs like federal work-study and SEOG will materialize, Princeton will reaffirm its commitment to meeting the full financial needs of students without any required use of loans, says Day.

Last year, an increase in Pell Grants and other federal aid programs similarly did not significantly impact Princeton’s scholarship budget. 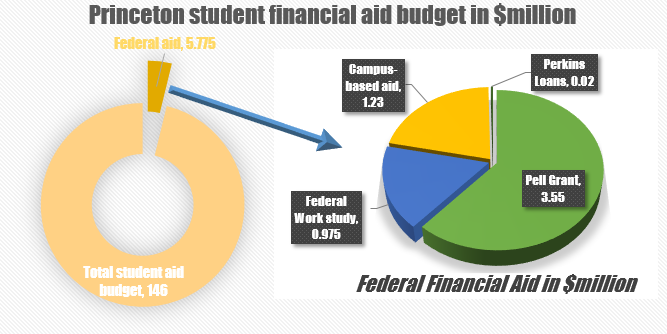 Yet, federal budget cuts may have a more significant impact on Princeton’s research efforts, which received over $288 million in federal funding in 2016.

Princeton is a member of the Science Coalition, an organization of research universities across the country. The Coalition produced a statement of concern about Trump’s proposed cuts on the same day that his budget plan was released.

“The Science Coalition is deeply concerned about the proposed cuts to science agencies and specific programs contained in the preliminary ‘skinny’ budget,” the statement reads.

The statement further explains that less than one percent of every taxpayer dollar spent supports basic science research.

“Federal funding for research plays a critical role in enabling Princeton and other research universities to conduct cutting-edge research and provide support for the graduate students who will become the leading researchers of the next generation,” said Day.

Day noted that if Congress decides to honor Trump’s requests for funding, it will take time to assess how the changes will affect Princeton.

Though the immediate impacts are unclear, Day added that Princeton will be advocating strongly for funding levels that allow colleges and universities to achieve their missions and support the national interest in education and first-rate research.

In late 2008, Princeton, Harvard and other institutions announced a temporary hiring freeze on faculty members, citing the uncertainty in the universities’ endowment earnings due to economic instability. It is unclear yet whether potential cuts to research budgets would restrict Princeton’s ability to hire new researchers.

Trump’s proposed budget would also eliminate the National Endowment for the Arts and Humanities. These grants provide fund of $74,000 for current projects in the Princeton Art Museum, namely, the Berlin Painter and His World: Athenian Vase-Painting in the Early Fifth Century B.C. which is currently on display and Nature’s Nation: American Art and Environment, which is set to go public in 2018.

A Princeton delegation participated in Humanities Advocacy Day in Washington on Wednesday. Princeton Citizen Scientists, a newly formed group of science, engineering and social science graduate students will participate in the March for Science on April 22nd. Congress is expected to begin budget deliberations in the coming months. In past years, Congress has made decisions that differ significantly from the President’s proposal. Initial reactions from Congress suggests that this will again be the pattern this year, said Day.

This story has been updated with the amount of SEOG funding that Princeton received in 2016.