“The situation highlights how wonderful the dining staff is rather than this being a horrible situation that the University got them into,” says Princeton freshman whose mother is on dining hall staff

Approximately 35 dining hall workers volunteered to sleep in cots in the multipurpose-room of the Frist basement and the Graduate College in the advent of Winter Storm Stella, the Daily Princetonian reported earlier today. These workers along with other essential employees did so to ensure that they can report to their posts on time.

The initial story, which did not articulate the voluntary nature of the employees’ stay, sparked a social media storm Tuesday morning as students questioned whether the workers were forced to stay on campus and whether they received compensation for their time. Some gasped at the diligence of dining hall workers while other expressed concerns with how the University treated them. 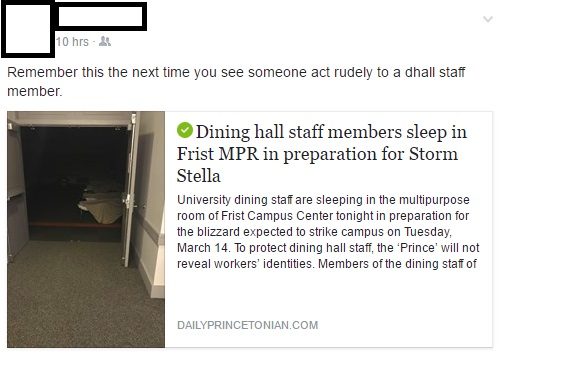 According to University spokesperson John Cramer, all dining hall employees were asked Monday whether they would volunteer to stay overnight. Multiple employees chose not to remain on campus and returned to their families, Cramer said. The University also did not require essential employees who lived outside a certain radius from campus or who resided in poorly maintained, unplowed areas to come to work, Cramer explained. Those who volunteered to stay overnight received a “sleep pay,” which is one and a half times the straight time rate. Additionally, as the university announced closure at 5 a.m. Tuesday morning, the employees who came to work received double the time pay for hours up until 5 p.m., when the University reopened.

In response to inquiries from The Tab, Cramer further noted that food and shower facilities were provided for the employees who chose to stay on campus.

A copy of the Services Employees’ International Union Local 175 contract shows that employees are given 1.5 times the hourly pay rate while working overtime. Additionally, the contract states that essential services employees are expected to work hours outside their regular schedules when notified of the necessity by their departments.

A representative from SEIU local 175 did not immediately respond to a request for comment. A dining hall worker and a member of SEIU did not dispute Cramer’s statements in an interview with The Tab.

Preeta Acharya, a freshman whose mother is a dining hall worker in Butler, said that although it was unfortunate that many employees had to sleep in Frist, the situation “highlights how wonderful the dining staff is rather than this being a horrible situation that the University got them into.”

Acharya explained that her mom didn’t stay on campus as her shift only started at noon on Tuesday. If her mother had an early shift, she would’ve had to wake up at 5 a.m. to arrive on time before the blizzard ended.

“The University greatly appreciates the teamwork, positive attitude and professionalism displayed by all employees who have been working to ensure uninterrupted services and support to our community during the storm,” Cramer said in a statement.

Cramer further noted that for several years, staff shelters have been set up in Frist or Dillon to accommodate staff from Campus Dining, Facilities, Public Safety and other departments during emergencies. Such was the case during Hurricanes Irene and Sandy. However, this is the first time that dining hall workers were hosted in the Frist MPR.

Other peer institutions also have similar practices for their essential workers.

Cramer also acknowledged that some managers of dining services were accommodated last night in hotels along Route 1. He noted that in the past, both dining services managers and staffers have stayed at Nassau Inn or Palmer House during emergencies.

“Every weather emergency is different. In this case, there were no hotel accommodations available in town, so a small number of managers stayed, two to a room, in hotels along Route 1,” he said. He added that managers who chose to live in hotels along Route 1 were not given the overtime pay that employees who stayed on campus received.

The University has not received any reports from dining services employees expressing dissatisfaction with the living conditions in the Frist MPR.

However, reports of dining hall workers sleeping on cots in the basement of Frist triggered heated conversations on social media.

Brandon Hunter, a graduate student, stated that he believes the university could have done a better job with accommodations.

“But the fact workers were paid time and a half and those that needed to leave could leave shows how important a union is for workers, especially service workers,” Hunter said.

He added that without the union, the university could have reprimanded workers who left and there would have been less accountability in terms of pay. Brandon noted that he wishes to see future investment in better overnight furnishing.

“It’s also worth noting that for many workers the time and half might’ve been the difference between making ends meet or not, so this might be a good chance to figure out whether our service employees are making a living wage,” Hunter added.

The Princeton Undergraduate Student Government also released a comment form for students to voice their appreciation for the dining services staff. USG will also host a staff appreciation event later this month, according to USG president Myesha Jemison. The USG is also examining the situation with the administration.

Acharya stated that she believes the staff appreciation event is a nice start.

“I think some people may forget that the dining hall staff have to make sacrifices on a daily basis because of the nature of their jobs,” Acharya said.

She noted that many dining hall employees wake up at 5:00 am to make it on time for their shift, and that her mother sometimes come home with burns and speaks of how tired she is after lifting large items all day.

“The work they do everyday is ridiculously hard; we’re only noticing now because it’s right in front of our eyes when we see them at Frist,” she said.

It’s gratifying to see recognition pouring in for the sacrifices of the dining hall staff, Acharya said.

“But it’d be great if we could do it on a regular basis as well.”