There were no identified victims, witnesses or suspects

A 10 by 14 inch orange-painted Swastika was found on the Hedgehog and the Fox sculpture three days after Trump’s inauguration, according to a report by the Princeton Alumni Weekly.

The Swastika was painted on the inside of the three-piece sculpture. It was removed on January 25th, two days after it was reported, according to University spokesperson John Cramer.

Cramer also said that the Swastika was first reported by a University staff member. The University subsequently hired an art conservator from New York City who removed the swastika with a solvent. The Department of Public Safety also apprised the administration, investigated the graffiti as a bias incident, and sent a bias incident report to the NJ State Police as required by state law, according to Cramer.

There were no identified victims, witnesses or suspects, he said.

“The University condemns such acts of bias, moved quickly to remove the graffiti and encourages the campus community to report bias incidents to DPS,” Cramer added in a statement.

The hedgehog and the fox sculpture has been subjected to graffiti incidents before. Remnants of another Swastika painted on the inside of the sculpture during summer of 2015 are still visible. According to Cramer, it is taking longer for that mark to completely fade because of the graffiti substance used. 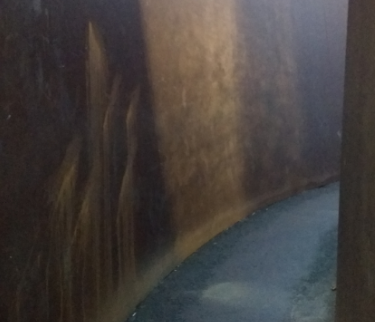 Remnants of Swastika painted in summer of 2015