They explain why they support the wall, the travel ban, and oppose sanctuary cities

The 2017 CPAC was a celebratory hub for newly elected Republican lawmakers in Washington. To join them in the victory salute are thousands of College Republicans from across the country. Among them are 10 members of the Princeton College Republican delegation. The Tab spoke with three members of the delegation, Will Crawford, a freshman, Paul Draper, a junior, and Daniel Schwarzhoff, a sophomore, about their impressions of remarks made and ideas floated around the four-day conference. The three did not speak on behalf of Princeton College Republicans. Their responses are edited for clarity and length.

What brings you here to CPAC this year?

Crawford: It’s something I’m interested in, and when College Republicans put out an announcement that they were going, I thought it would be a good opportunity to see some speeches and meet some people.

Draper: This is my third time here at CPAC. College Republicans organize a chapter to come down every year, as you can see here a large portion of the crowd are college students. It’s a good time to interact with many other conservatives. We don’t see this kind of ideas expressed on college campuses most of the time. Also unique to this time is that Donald Trump has become president, so it’s like the beginning of a Republican and conservative era.

Schwarzhoff: I’ve been a Republican and a conservative for a long time and I think with this year, it’s really a celebration of the victories we had in White House and Congress. So I not only came to see how we can defend our rights and ideas but also to celebrate our wins.

There are a lot of remarks being made here that Republicans are in the minority in colleges and that free speech is often stifled, do you agree with that? Do you feel as though you are uncomfortable in sharing your political views?

Crawford: I think it is the case that people who are 19 or 20 are generally not involved in politics or if they are activists, they are not working for conservative values. As far as culture on campus goes, it certainly seems that way – whether people actually feel like that on campus or just a few people are the loudest, I can’t say. I don’t think I felt that I can’t say something I want to say because it’s political.

Draper: College Republicans are obviously in the minority because more students are liberal. And obviously, when you’re in the minority, you’re more hesitant to say things because the majority will be against you, and that’s a troubling place to be. I will say that Princeton is better than most schools because the University administration supports free speech and dialogue. Although, with Trump coming in, we’ve seen a lot more furor from students on the left, which makes it harder to advance your ideas as a conservative.

Schwarzhoff: I think one of the problems we have on campus that makes it such an intolerant atmosphere – though it is better than most campuses – is that you must accept a premise and not debate that premise, such as abortion is an individual right, or that the government has a duty to provide welfare. If you don’t go along with that premise, you’re labeled all sorts of nasty labels.

Let’s talk about some of the more controversial ideas or premises. There is a lot of talk at CPAC about building the wall and staying the ban to counter “radical Islamic terrorism”. What are your thoughts on those two issues?

Schwarzhoff: I think radical Islamic terrorism is a serious problem. I think we have a large and outspoken sector in the Middle East that’s calling for death to Americans and death to the West. So any acknowledgement or progress that we can handle it is progress in my opinion.

Draper: I generally support the measures that Donald Trump has taken. I don’t like the language that’s being used, for example, the “Muslim Ban.” Everyone knows that the vast majority of Muslim-majority countries are not affected at all. It’s more of a security measure. The ban targets countries that aren’t politically stable, have high frequencies of terrorism. I think the fact that Trump is willing to take a step back and assess the situation, which is really what this temporary ban is about, is just to say that we need to halt immigration and assess the security measures properly to make sure that in the future, we can bring in the people we need to bring in safely. 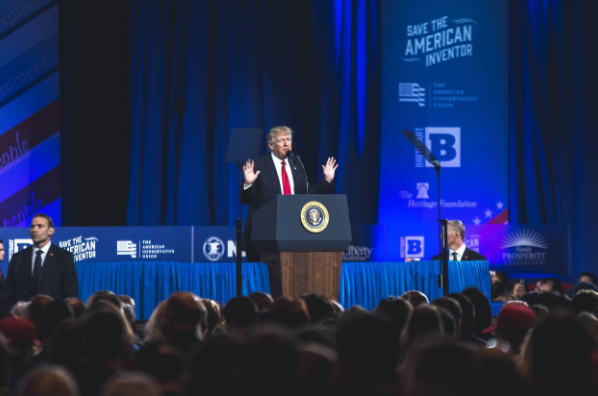 When it comes to the border wall, the way I see it is that the wall should be a pretty common sense measure. It’s hard to see why you wouldn’t like the border wall. All an effective border wall would do is just so we can control who’s coming in. To bring the two issues together, there could be somebody now who is engaged in Islamic terrorism in Mexico who can just walk across the border. A protective measure at the border would allow better control of the influx. All the measures are pretty sensible. And I think that the liberal anger about them has been unreasonable. I won’t fault all liberal students though since a lot of the news media hasn’t been portraying the measures fairly.

Would you say that you support these executive orders?

Crawford: Yes, I support them.

Draper: I definitely support the substance of the policies. I will say strategically and managerially the way those policies were rolled out were not properly handled. For example, the policy wasn’t intended for people who already had greencards who couldn’t get back here, and the White House should have clarified that sooner.

Crawford: It’s almost baffling to me that some mayors are so committed to something that by definition is against the law and which clearly has significant negative consequences for American citizens. I’d like to see San Francisco go for it and lose the hundreds of dollars it gets from the federal government.

Draper: The Trump administration’s policy isn’t radical at all. I don’t understand why anybody would say that it’s good for those who’ve committed crimes and came here illegally to continue being here. And it’s harder to understand why people think it’s good for the communities they live in to keep them here. If you want to be a partner in receiving federal funding from the government, you should be a partner in enforcing policies.

What was the most bizarre moment you found at this convention? 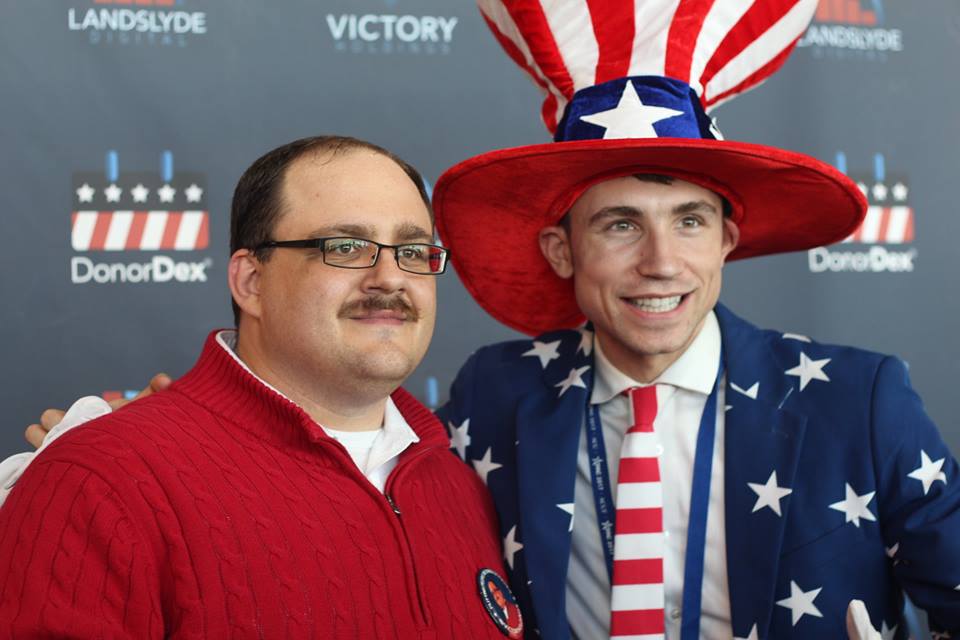 Crawford: We got a picture with Jim Gilmore. 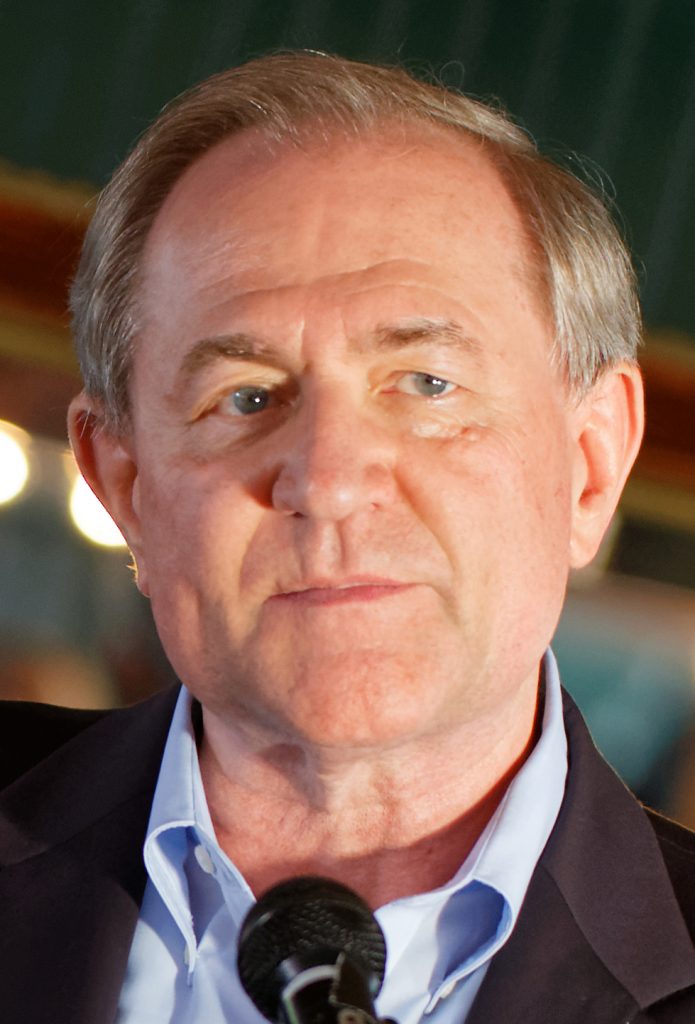 Draper: Yes, Jim Gilmore. There’s a running joke on the College Republicans Facebook that he was never a serious presidential candidate. I mean he was serious about it, but he wasn’t taken seriously. He tried really hard and he actually has a pristine background and experience. People would friend him on Facebook and add him to groups. It’s funny because not too many recognized who he was; we felt bad for him.

Schwarzhoff: Certainly the most surprising thing that happened was that I was in the ballroom waiting for the next speech and when I looked up, Nigel Farage was standing before me looking for a seat in the audience. 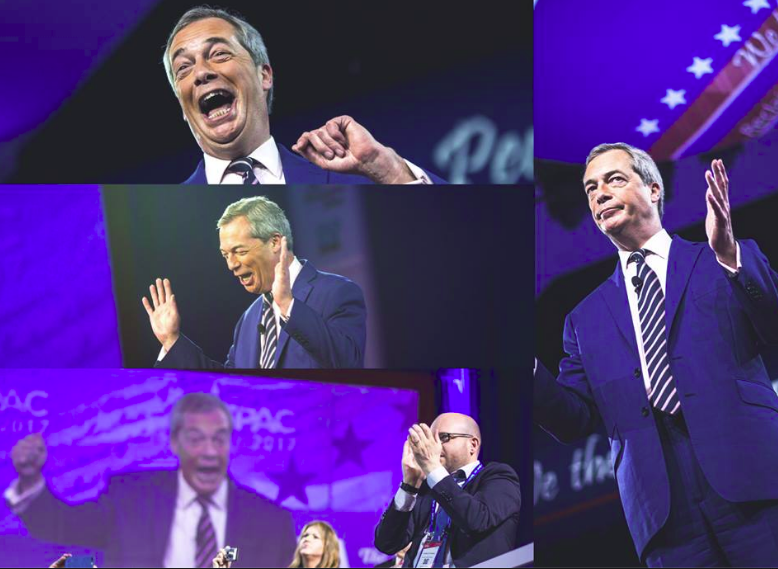 What do you think of Trump’s speech, did you find it substantive?

Draper: I mean it was substantive in a “Trumpesque” way. Some people call him a great communicator, and he’s definitely not like the Ronald Reagan type of great communicator. But he knows how to play a crowd. When you’re speaking to a group of people who are instrumental to helping you get elected, it is different than speaking to a neutral crowd or policy experts.

Schwarzhoff: You don’t realize this when you watch TV – his mannerisms, the things he says over and over. Like today he said, ‘nobody loves speech better than me.’ If you watch this on CNN, you may wonder why is he saying that. But the audience truly embraces what he is saying. Before he finished that sentence, the audience was already cheering “better than me.”

Draper: Alt-right is a pretty overaching term. The conservative leaders have thoroughly denounced Richard Spencer. What the left has to be careful about when using the term “alt-right” to describe Richard Spencer is that it may normalize his behavior. The term “alt-right” has been used by left wing media to characterize Trump, and people know that Trump obviously isn’t a racist. So the danger of using the same term to describe neo-Nazis like Spencer is that it desensitizes racism and vindicate their behavior by associating them with Trump.

Schwarzhoff: Trying to silence somebody from speaking that you think is a Fascist through violent protest and intimidation is very ironic.