An investigation into St. Archibald’s League, Princeton’s newest and most mysterious eating club

As clubs along Princeton’s Prospect Avenue bustled with bickerees last night, a bizarre event took place for the mysterious, fictitious St. Archibald’s League, featuring a mix of vocal protesters and over 250 bewildered onlookers.

It all began earlier this week when Princeton students received an email inviting them to bicker for a previously unheard-of society, calling itself St. Archibald’s League, a pastiche of an eating club.

At this supposed society, the website says, each meal is prepared and served by “authentic immigrants” and eaten with gleaming silverware.

“We are a 150-strong group of best friends,” they say. “We always have the time of our lives. We all love each other. We’ll love you too, if you get in.” 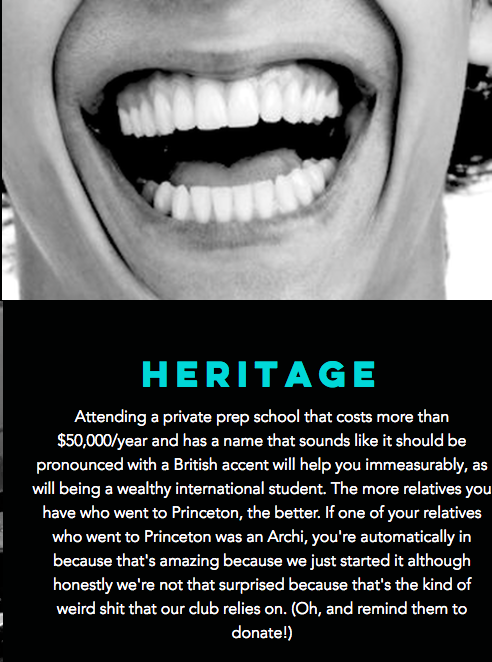 The website also provides helpful hints for prospective applicants. Notably, attending a private prep school that costs more than $50,000 a year and “has a name that sounds like it should be pronounced with a British accent” will help immeasurably.

This is where it starts to become a bit confusing, as St. Archibald’s League’s site links to Club Revolucion, an anti-bicker movement. Among its suggestions of how to ban bicker are demands to consider not donating to Princeton after graduation (and getting parents to do the same, if you have rich parents), until clubs become sign-in.

So St. Archibald’s League sent an email to advertize their club, telling potential bickerees: “Stop by anytime during that window to test your worth. We’ll only need you for 15 minutes. We’ll be able to tell about you in that time, don’t worry.”

And then yesterday, many students received an email announcing that an evening demonstration would take place at St Archibald’s League at 5 Prospect Avenue – Campus Club.

At 8pm sharp, a crowd of protesters showed up with giant posters. They shouted for equality and inclusivity as one man appeared every once in a while around a gigantic sign for St. Archibald’s League, leading people in for a chance into the club. 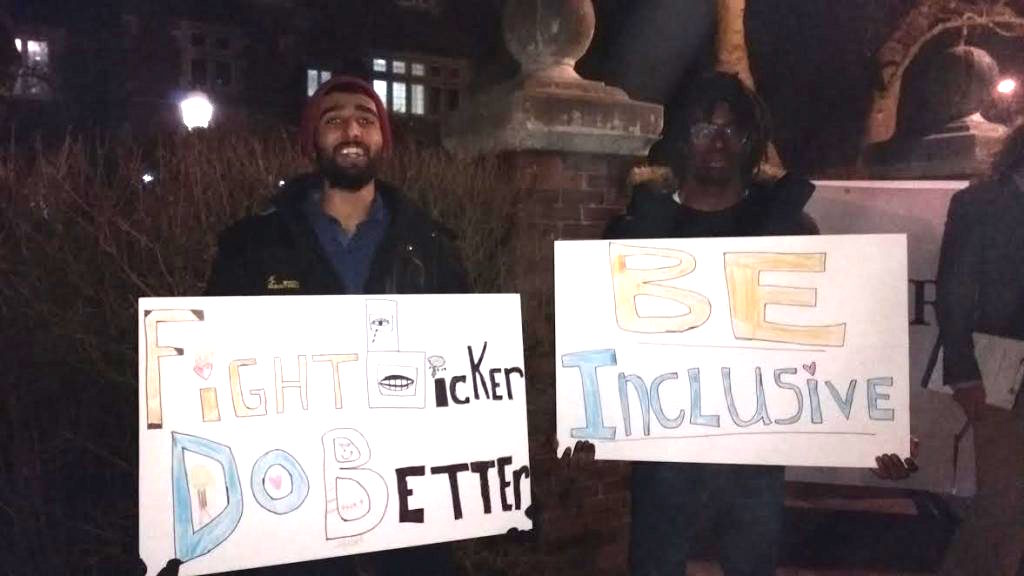 That man was Kyle Berlin, the host of St. Archibald’s League. Adding fuel to the flame that this is all an elaborate gag, Kyle recently wrote an anti-bicker op-ed in the Prince that contained these words:

“I refer, of course, to the eating clubs’ admissions procedures — known as ‘bicker’ — that occur each February like a late-winter ritual. As deer may silently gather to ford the icy river in search of an early spring berry, or the chipmunk may awaken to snack on her stored nuts, packs of Princeton students gather each February to welcome (or deny) their classmates to eat with them.”

At the outset of our conversation Kyle, a junior, claimed while he has never been in an eating club or participated in bicker, he believes the system is one of the most “egregious things” at Princeton. 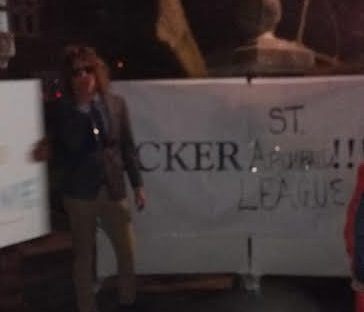 “The bicker system is a backward practice we still have, although we claim to be loving and inclusive people,” he told us. Kyle says he’s seen a lot of hurt that the system has created among his friends, and hence came up with the concept of St. Archibald’s League during winter break to garner some momentum for resistance.

In spite of the satire and showmanship surrounding St Archibald’s League typically reserved for initiation rituals, Kyle claimed he is extremely serious about his cause.

“I really do believe in the power of humor to lighten up a situation,” he explained. Kyle says while he has serious objections and other people also take bicker seriously, a sideways approach of satire can make discussions of the issue more palatable.

Earlier this week, Kyle partnered up with a few other students who held similar passions but were considering a more radical approach. He eventually casted some of his partners as protesters outside St. Archibald, a strategy Kyle held to be more preferable than picketing actual clubs like Ivy.

One of those students outside St Archibald was Sarah Wang, a junior. She told the Tab that she thinks there’s already a pervading culture of exclusivity at Princeton and bicker helps to perpetuate it.

Kyle also told The Tab that strangely enough, not an insignificant number of people were confused about whether the pretentiously named St. Archibald’s league was a real club.

“This points to a problem of this place that a club like this could exist and wouldn’t be out of the ordinary,” he said.

“Members of bicker clubs definitely don’t mean any harm and are genuinely nice and considerate people, but I don’t understand why there needs to be a whole process meant to keep others out of a specific social circle,” Wang said.

To demonstrate this exclusivity, during the League’s “bicker session,” Kyle led a group of people every 10 to 15 minutes into Campus Club. They would be then greeted by other St. Archibald members (who were actors) and subjected to questions typically asked during bicker but exaggerated a notch. Some people were then hosed, rejected, and removed by Kyle. Others were welcomed into the initiation ceremony with drinks and music. This setup was inspired by “Re-inventing the Guided Tour,” a class offered by the Lewis Center.

Though Kyle said that he received a plenty of support throughout the campaign, there were a few defensive and aggressive emails. During Tuesday night, it was disheartening to see some who were walking back from bicker tell protesters that it wasn’t wrong for people to be judged, Berlin said. 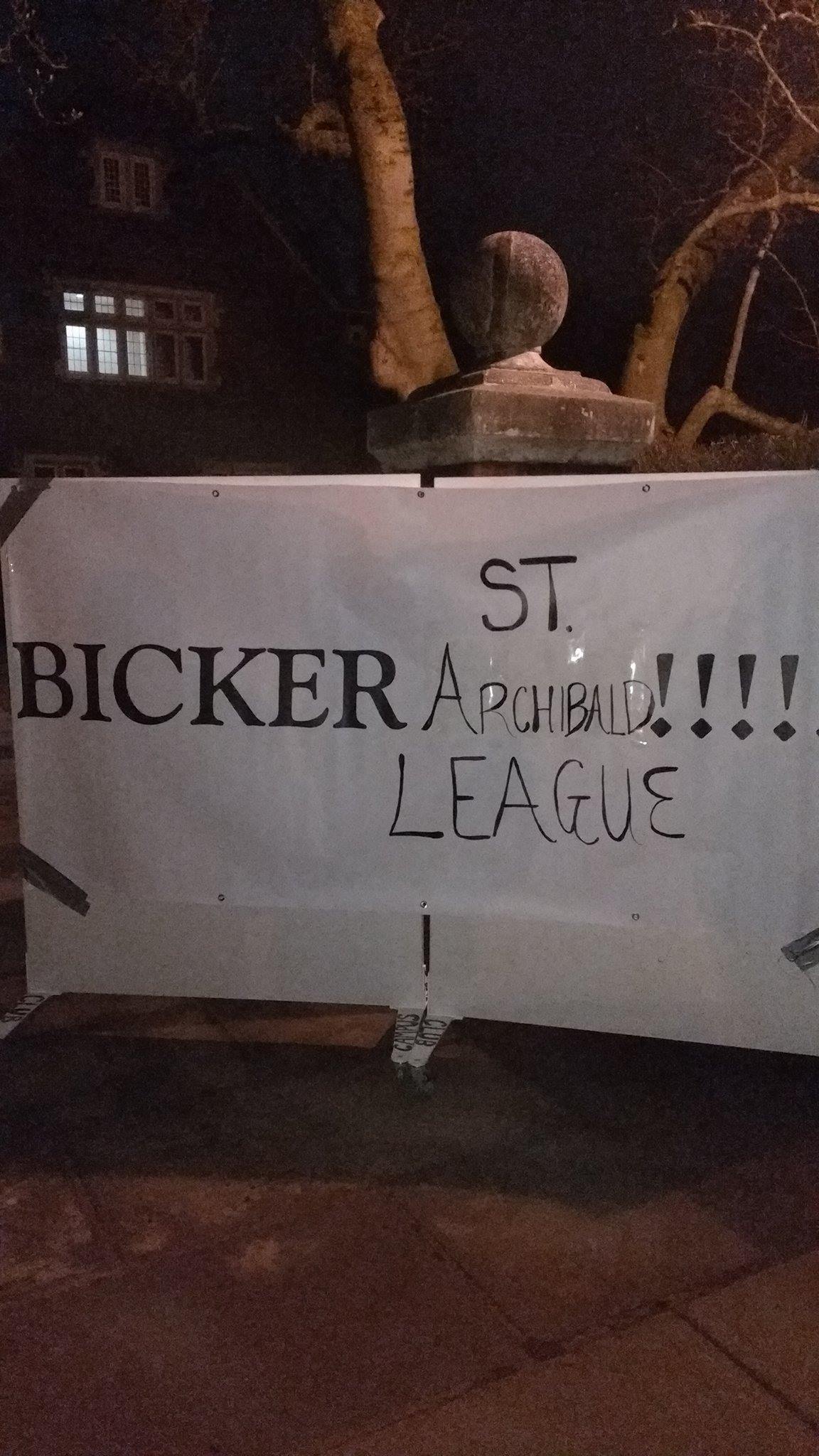 In response to criticism he has received that bicker clubs will be exclusive anyway even if they are turned into sign-in clubs, Kyle notes that losing a draw, as annoying as it is, is very different than being rejected by your peers. In addition, Kyle said just because the problem is big, it doesn’t mean the Princeton community shouldn’t make incremental steps.

“It’s an uphill battle, but exclusivity is of previous times,” he said.

Kyle promised more demonstrations to come in the coming months to fight bicker. There may be more activities with St. Archibald’s League and more interventions in more satirical or radical ways, he hinted.

He added students who are interested in getting involved can sign an online petition or volunteer to be actors in future events.

Several presidents of bicker clubs did not immediately respond to a request for comment.