Princeton has one of the riskiest investment portfolios, but with one of the highest returns in the Ivy League, according to a post in a financial blog.

Over a ten-year period we improved by over 8%, although the standard deviation, a measure of risk, was at around 13.5%

Only Columbia could be seen to be doing significantly better than us, and we managed to get more return with less risk than Yale.

On the other end of the spectrum, Brown, Cornell, and Harvard should probably come to use for some financial advice as they can’t quite get the return on their investments. 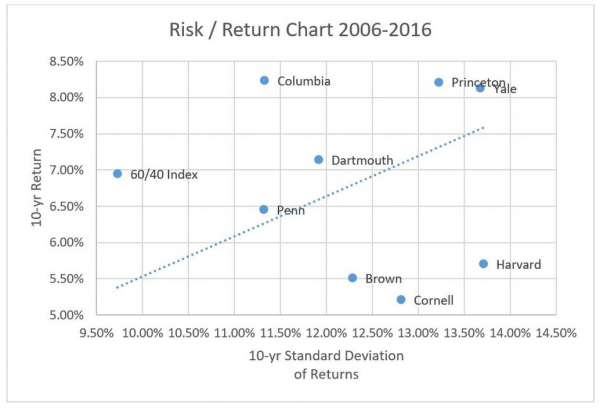 The Ivy League as a whole is being made to look bad by the standard 60/40 index, which is taken as a benchmark for investments. That’s the index where 60% is invested in the stock market, and 40% in bonds. Although the 60/40 index didn’t return as much as the experts we have at Princeton, it did so with much less risk.

The blog says the key to our success is our consistent investment officer Andrew Golden, who has been with us since 1995.

It looks like our 42k is being used well.