Their most recent article really missed the point

On October 16, The Daily Princetonian’s Editorial Board published an editorial titled “Yes All Women’s Center” in which they called out the Women*s Center for being non-inclusive of “a politically diverse female student body,” in their terms.

I, however, would like to call it what it is: anti-feminist social conservatism, which has little place in a Women*s Center. Moreover, this editorial distorts many facts or omits them entirely in its push to paint the Women*s Center as overwhelmingly anti-conservative. 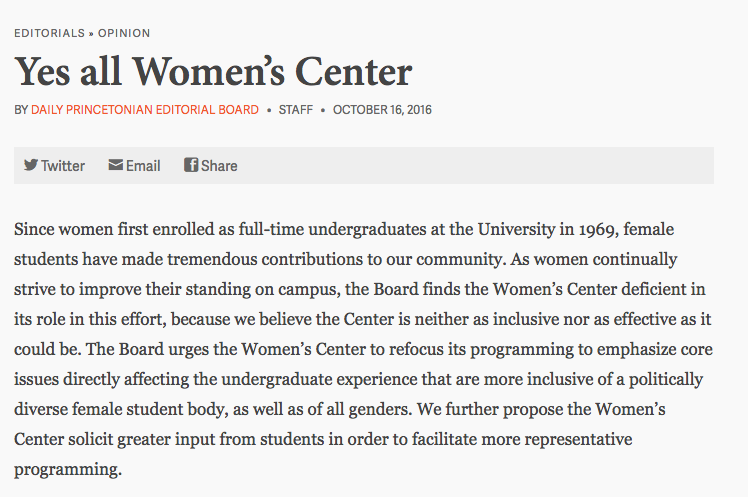 A screengrab of The Daily Prince’s article

First, on the topic of the Center’s schedule of events. While it is true that the third full week of classes featured sex positivity programming, and the fifth week an election-related event, the editorial’s statement that such scheduling is surely due to “a case of misplaced priorities” is ignorant at best and intentionally misleading at worst. On the first day of classes, September 14, the Center hosted a 45th Anniversary Reception for Women Leaders at Prospect House, featuring female leaders from the senior, junior, and sophomore classes at the university.

Furthermore, on the September 29 they hosted trans activist and model Carmen Carrera to speak about her outreach initiatives. The editorial board maintains the Center “ought to prioritize high impact events that encompass the full range of interests Princeton women have, such as pursuing leadership opportunities or seeking career advice”; that they feel the election is the only such relevant topic is more telling of their perceptions of what constitutes female leadership than it is of the Women*s Center’s priorities. Additionally, events such as the Elect Her workshop the editorial praises features student leaders from USG, Class Council, the eating clubs, and the Prince itself, as well as the mayor of Princeton herself. Unlike other workshops, once can easily imagine that this event would be difficult to schedule, and not entirely up to the Center’s discretion.

Moreover, the editorial then goes on the lambast the Women*s Center for including so-called “politically charged and overwhelmingly liberal” events while also calling for inclusion of more diversity. However, the editorial seems to be rather ignorant of the fact that these events are themselves the result of the more open programming and diverse backgrounds of opinion that the editorial calls for. In fact, all three of the events named in the editorial are the result of co-sponsorship with other student organizations:

“Truth and Power: #BlackLivesMatter Documentary Screening” (March 24, 2016) – Sponsored by the Women*s Center and the Carl A. Fields Center

“Battling Abortion Stigma: A Student Speaks Out About Her Story” (May 8, 2015) – Co-sponsored by the Women’s Center and the WWS Gender and Policy Network

The Women*s Center has always hosted events from more politically diverse groups as well. In fact, on the same day the editorial was published, Princeton Pro-Life hosted a “Pro-Woman, Pro-Life Open House” in the Women*s Center, which was explicitly open to both genders, just as the editorial suggested. Last November they hosted “Muslim Masculinity in an Age of Feminism,” an event discussing changing views of masculinity sponsored by the MAVRIC Project, Program in Gender and Sexuality Studies, and the Program in Near Eastern Studies, as well as the Women*s Center. The screening of the campus rape documentary “The Hunting Ground” was also co-sponsored by MAVRIC and the Women*s Center as well as members of the Class of ’77, Gender and Sexuality Studies, and the Women’s Mentorship Program. Clearly, the Center does work with student organizations across the spectrum of priorities, and isn’t necessarily pushing some hidden liberal agenda.

Lastly, the editorial takes a sudden turn into moral pearl-clutching regarding the sex positivity programming, calling its presence and advertisement on campus “crass publicity [that] crosses beyond provocativeness.” This phrase is literally preceded by the clause “while the Board supports the Women’s Center’s freedom of expression,” but the editorial could not be more obvious that it does not, in fact, support freedom of expression—supposedly, such provocation could be off-putting to many students. But is that not the purpose of free speech—to allow student organizations to speak as they will, even if it turns some audiences away?

The editorial’s claims that sex positivity programming is complicit in the objectification of women’s bodies is myopic and conflates two significant problems with regard to women and sexuality: the problem of objectification, and the stigma against female sexuality. As an attendee of the Yoga for Better Sex workshop, I can attest that it very much focused on the latter, encouraging class participants of all genders to be in better communication with their own bodies, rather than about pleasing or performing for a partner. 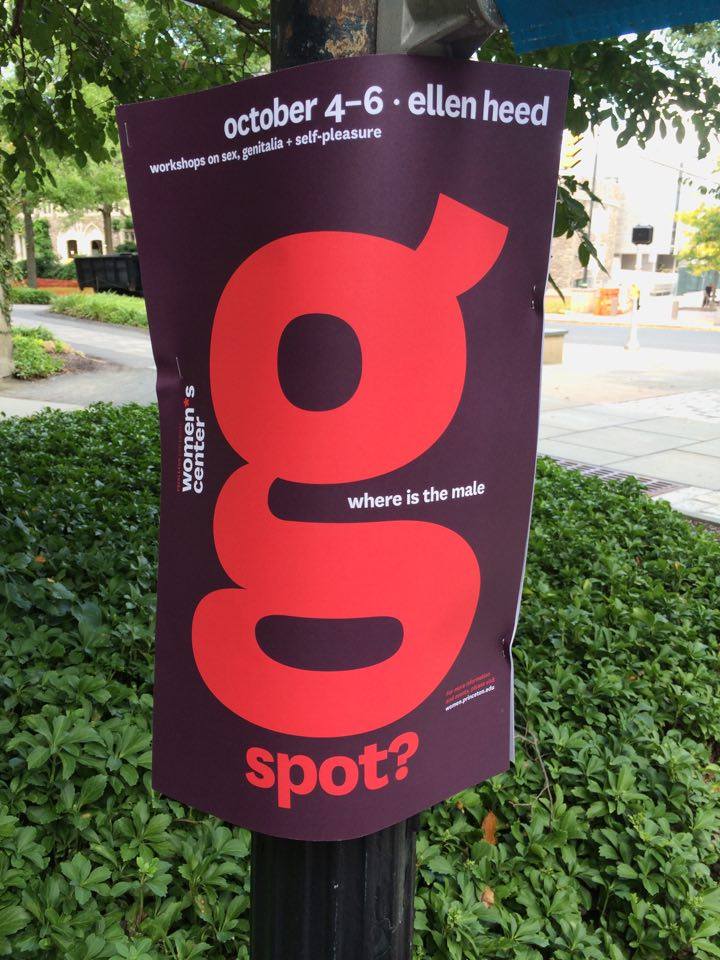 As a Peer Health Advisor, I would also like to state for the record that we have been discussing hosting sex positivity events, as well as holding sex education events for freshman during the first few weeks of class. If McCosh thinks sexual health and awareness if worth addressing, I don’t see why the Women*s Center shouldn’t follow suit. Furthermore, by implying that reclamation of female sexuality—and what else could you call a luncheon oriented around women learning how to pleasure themselves?—is an inappropriate subject for the Women*s Center, the editorial board is using the same logic that stigmatizes female sexuality, contributing to objectification of women by removing the ability of women to reclaim sexual agency.

Five out of twelve of the Editorial Board members are women. Evidently, there are some women who disagree with the slant of the Women*s Center’s programming. Still, this editorial is not a solution. This editorial is regressive in its views of female sexuality, close-minded in its interpretation of diversity-oriented programming, pigeonholing in its strict definition of female leadership events, and flatly incorrect in its statements regarding the political implications of the Center’s programming.

Lastly, for all the fuss the editorial makes about the Women*s Center’s need for more diversity of viewpoints, as well of gender—because really, doesn’t the Women*s Center need more male viewpoints?—it fails to use the asterisk within the organization’s title even once. And when the asterisk, as part of the group’s recent rebranding, represents the Center’s desire “to recognize & redress historic & persistent gender inequality at Princeton & beyond”? Well, evidently the editorial board missed that point.