BREAKING: Wilson mural to be removed from Princeton

In an email addressed to residents of Wilson College, Professor Eduardo Cadava announced the mural of Woodrow Wilson in Wilcox Dining Hall will be removed.

The decision was made in conjunction with an ad hoc committee of 12 students.

Cadava said the Princeton community owes a “felt debt” to the Black Justice League, a group of students who focused attention on the racist aspects of Wilson’s views, and Cadava thanked all students, faculty and alumni who expressed their views on whether the photo should be kept or removed. 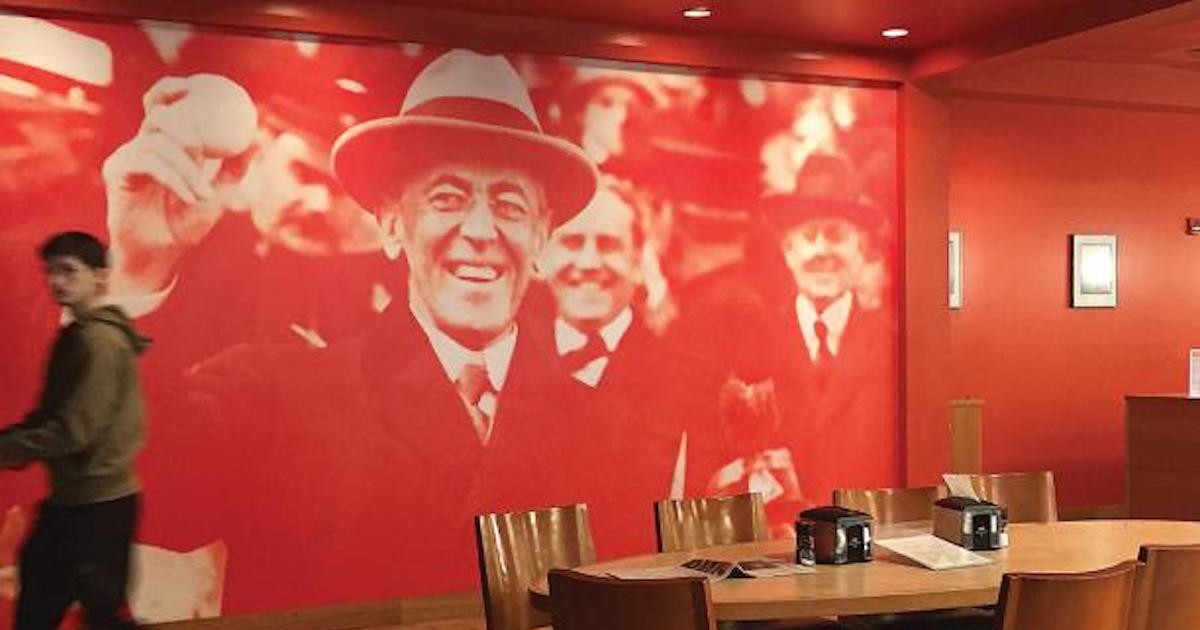 He wrote: “From my perspective — a perspective that I believe honors the wonderful history of Wilson College — the ad hoc student committee’s recommendation to remove the Wilson ‘mural’ is an effort to lay one stone aright today, in the hope that others can be lain aright in the future”.

The mural will be replaced with an image which “embodies the college’s unique history in relation to issues of inclusion and diversity”, however no decision has been made as to what exactly this will be.

Princeton just released a statement on the mural, printed here in full;

An enlarged photograph of U.S. President Woodrow Wilson throwing out the first pitch at a baseball game will be removed from the wall of a dining hall at Wilson College, one of the residential colleges at Princeton University.

Professor Eduardo Cadava, the head of the college, agreed with a committee of Wilson College students who recommended that the photograph be removed.

“Its size and prominence in the Wilcox dining hall has seemed to us — as it has to President (Christopher L.) Eisgruber as well — as ‘unduly celebratory’ and not in keeping with the spirit of Wilson College’s founding wish to have Princeton be a place that is truly diverse and inclusive, and one that embraces, respects and values all its members,” Cadava wrote in a statementposted on the Wilson College website.

Cadava’s decision was endorsed by the Council of Heads and by the Campus Art Steering Committee, clearing the way for removal of the image. The University’s facilities department is expected to remove the image over the next few days. In his statement, Cadava suggests that the photograph be replaced with a “visual representation that embodies the college’s unique history in relation to issues of inclusion and diversity,” but no specific plans have yet been made.

While commonly referred to as a mural, the image of Wilson is actually a black and white photograph from a 1915 Washington Senators game, overlaid in reddish orange, enlarged and affixed to the wall. The photo was installed as part of a renovation of the dining hall in 2009.

“To refer to the image as a mural is to confer an artistic merit on the image that it does not really have and, because it was only installed in the dining hall seven years ago and, mostly as a signature design element, it also does not have the longstanding value that other honorific memorials might have,” Cadava said.

In a statement to college members, Cadava noted that Wilson College was founded by students “as part of a stance against elitism and exclusion.” In 1957, students reacting to the exclusionary policies of eating clubs founded Wilson Lodge. In 1960 the University opened Wilcox Hall and the New Quad dormitories, which became the locus of the renamed Woodrow Wilson Society, in honor of Wilson’s idea of establishing a residential college system at Princeton. The society was student-run until 1968, when Wilson became the first of the University’s six residential colleges.

“What I have always admired about this history is that a group of students took a stance against discrimination in the name of diversity and inclusion and, in doing so, established an alternative community founded on principles of social justice,” Cadava said.

While the Board of Trustees recently decided to keep Wilson’s name on the college and on the Woodrow Wilson School of Public and International Affairs, the photo’s fate was a matter internal to the college. Cadava formed an ad hoc committee with 12 student members, who attended events of the trustees’ Wilson legacy committee, read scholarly reports on Wilson that the trustee committee collected, conducted interviews with members of the Wilson community, and organized a public discussion at the college.

Cadava thanked committee members for their work. “That they could come together despite their differences, and proceed in a scrupulous, thoughtful and respectful manner suggests a model for how we might move forward and make decisions collectively that can make both Wilson and the University a better and more welcoming place for everyone,” he said.

In his statement, Cadava cited a passage from the student report: “It is important to remember that the name of the college was chosen in honor not of Wilson, but of his vision for the residential college system…. This means that the college was named not so much for a man as for his ideas, which creates a degree of separation between the two. However, the mural — which so clearly celebrates the man — begins to chip away at this degree of separation. The giant picture in the dining hall unavoidably brings the man Wilson into the college Wilson.”

Cadava said the University community owes a “felt debt” to the Black Justice League, a group of students who focused attention on the racist aspects of Wilson’s views, and Cadava thanked all students, faculty and alumni who expressed their views on whether the photo should be kept or removed.

“From my perspective — a perspective that I believe honors the wonderful history of Wilson College — the ad hoc student committee’s recommendation to remove the Wilson ‘mural’ is an effort to lay one stone aright today, in the hope that others can be lain aright in the future,” Cadava wrote.