What has the world come to when people are hooking up through Yik Yak?

It’s a recipe for disaster

There is, I won’t deny it, a gender disparity when it comes to looking for sex on campus. Most girls who go to the Street – and lots who don’t – will tell you that men express interest all the time, and they find themselves swimming in male attention.

Conversely, many men on campus feel they’re stranded in a sexual desert, without a drop of water to drink, crawling across the hot harsh sand to reach a far-off oasis. Some men turn to Yik Yak as a means by which to send out a forlorn mating-call by which to locate this lush swimming-hole. Some girls, for various and largely misguided reasons, answer this call.

Fellow women of Princeton: Yik Yak is not the answer. The oasis is a mirage. 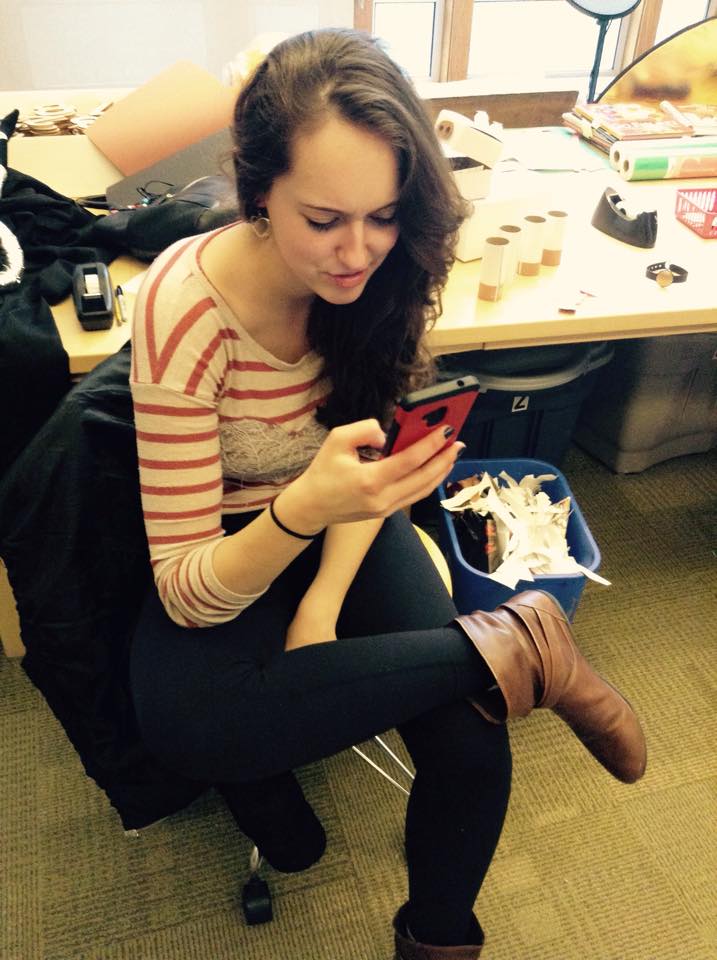 It’s difficult – probably impossible – to get a real sense of how many people hook up through Yik Yak. It does happen, and very occasionally, I’ve heard, it happens successfully.

But on a campus so thirsty that all you need to do to secure a sexual partner or four is lean out of your dorm room and shout something provocative down the hall, there’s no need to resort to Yik Yak. I’ll put it more strongly than that: here are some very good general rules of thumb why you should strongly consider leaving blue teepee or purple fire hanging and instead hop on Tinder or text the cute boy from SOC precept or go out to the Street – anything rather than follow through with your doomed and inevitably depressing Yik Yak hook-up. 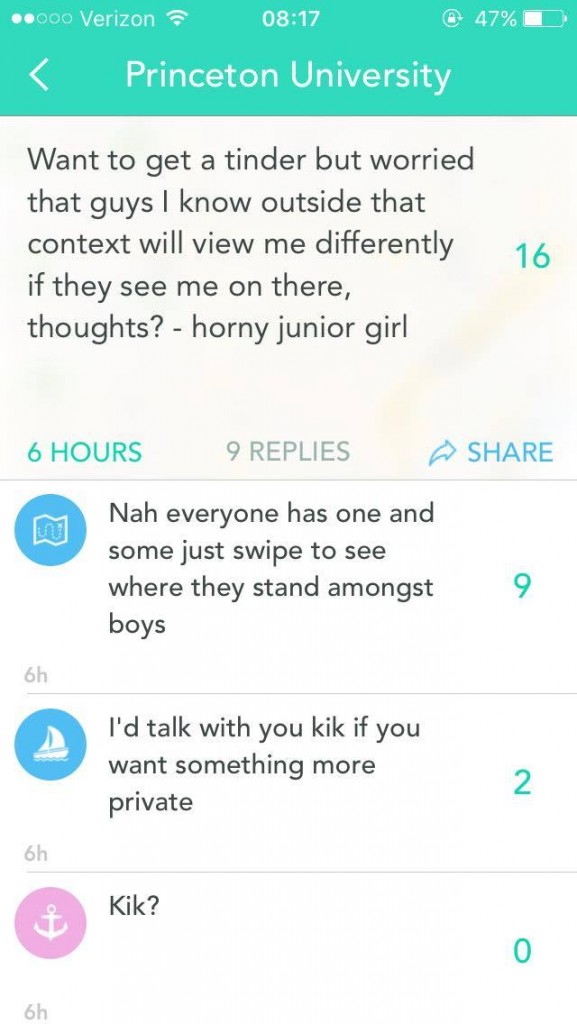 Ten seconds of sweaty and sloppy DFMO will give you more information on how a hook-up candidate looks, tastes, and feels than ten minutes of awkward conversation on Kik. And unless you’re one of the lucky people who’s indiscriminately attracted to everyone, then this kind of thing matters.

This is a concern in all hook-ups, of course, because you could easily end up in a class next semester with the guy you were mauling in Terrace that one night, or swipe right on your best friend’s crush (“Oh, he’s that Jordan? I’m so sorry. At least – look º he has nice abs, right?”). It’s especially dangerous with Yik Yak hook-ups, though, because you typically know so little about them: there’s the option of meeting up in somebody’s room without even knowing their name. Perhaps that feels like a thrill, but it’s a big risk if you take into account the huge percentage of people on campus who you know but with whom you would emphatically not want to spend the night, let alone a couple of hours. And since I’d posit that Yik Yak hook-ups are more likely to go badly, thanks to the higher chance of a lack of chemistry, that just means one more person who you have to avoid at Late Meal. No one needs that in their life. 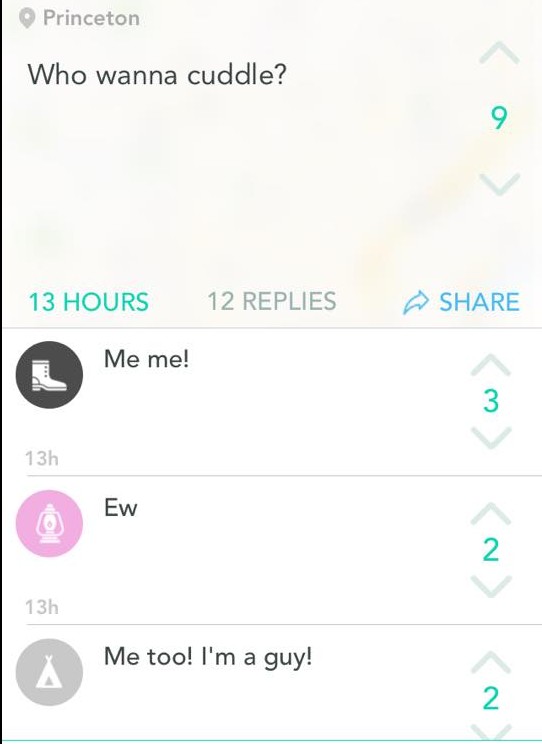 Yik Yak isn’t just Princeton students: anyone within a five-mile radius of you can see your yaks and your comments. There’s also no way of vetting someone if you can’t at least Facebook stalk them, or ask your very popular friend who seems to know everyone for the low-down. You’re just going off the limited information that this anonymous person chooses to provide over Yik Yak or Kik – and the thing about anonymous apps is that they make it very easy to lie.

Despair not: if you’re a tech-savvy millennial who is looking for love – or something else – on your smartphone, then there are superior apps (does anyone use Friendzy anymore?). At least Tinder, while not perfect, gives you pictures, an age, a bio, and a list of mutual Facebook friends. Guys tend to swipe right on most everyone, so matches are not hard to come by, and you can pick and choose based on whatever criteria you like.

There might be real reasons why you might feel that Yik Yak is the right platform for planning your sexual endeavors. Maybe you feel like you’ve experienced a genuine bonding moment over something or other on a Yik Yak thread, or maybe pink compass is into something very specific that you’re also into. Maybe you’re too shy to approach guys in real life (in which case – Tinder). Maybe you get off on anonymity (hint: the Street is a good choice for this). Maybe you’re bored, and it seems like the most convenient option, and you don’t want me to tell you how to live your life.

Fair enough. If you’re sure you want to go through with it, then all I’ll say is this: it would probably be wise to meet them in person in a public location first, and to text your friends your location if you decide to go over to orange canoe’s room. 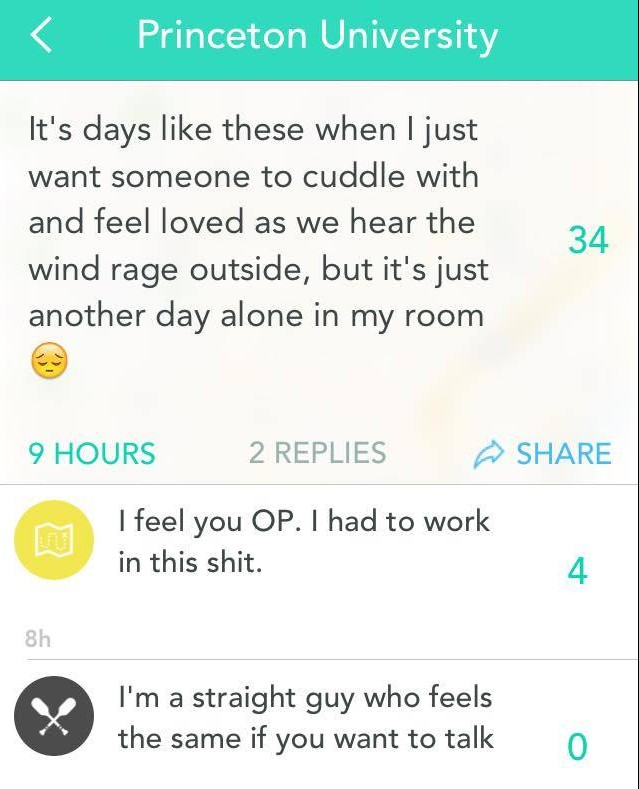 Let’s keep Yik Yak for ranting about That Kid in precept, live-yakking Harvey Rosen, and posting pics of our Neko Atsume kitten sanctuaries. Because that’s what it’s for.