She lost both parents in the space of three years

Penn State student Rachel Wiggins lost her father to cancer in 2013. She and her mother were living in New Jersey until 2016, when her mother also died of cancer. This summer, Rachel came to the realization that she was in danger of losing her Penn State family as well.

Last spring, recently-orphaned Wiggins says she was told "not to worry" about being considered an out-of-state student for tuition fees. However, when Higgins received her tuition bill in August, she learned she would be charged as an out-of-state resident and not as an in-state student as she had been led to believe.

Despite Rachel moving to Pennsylvania to live with her cousin’s family, being registered to vote in PA, having a PA license and paying Pennsylvania taxes, Penn State does not consider her eligible for in-state tuition.

Rachel petitioned Penn State to allow her to pay the in-state tuition rather then the out-of-state rate she currently pays of around $48,000 per year. This appeal was denied.

Higgins, 20, has lived in Pennsylvania since enrolling at PSU in 2015. According to Penn Live, an Aug. 4 letter to Higgins from the University stated: "Note that it is possible to be a resident of the Commonwealth, yet not meet with requirements of residency for purposes of tuition."

In a statement to The Tab, a University Spokesperson from the Office of Strategic Communications said, “We offer our heartfelt condolences to Ms. Higgins. We understand the challenges in this case and we sympathize with her situation. Our Office of Student Aid is committed to helping students find need- and merit-based support and is interested in exploring options with her. As we do for all students, Penn State must follow its residency policy when determining in-state or out-of-state tuition classification."

Rachel refused to give up on her dreams. Instead, she established a GoFundMe account entitled “Orphaned College Student” in hopes that her circumstances would receive the attention of kind strangers.

Ms. Desia Ally Joseph, Penn State graduate and one of the 504 people to help Higgin’s reach her goal, has a special place in her heart for Higgins’ circumstances. When Desia was young, her older cousin Tim was the first family member in America to attend college and was a proud Penn Stater. Desia intended on following in his footsteps when her life suddenly took a turn for the worse.

“My life, my plans, and both my emotional and financial support were forever altered when my dad died unexpectedly the spring of my junior year in high school and my grandparents' deaths followed,” said Joseph.

According to Joseph, the Penn State Administration advised that she take a year off as well, during which she lived with her cousin and found a job. Eventually, Joseph received a grant and worked her way through Penn State. It wasn’t much of a decision for Joseph to share Rachel’s situation with her friends and make a donation, given their similar circumstances.

In an August 18 Facebook post, Rachel thanked everyone for all of their kindness and donations, emphasizing how shocked she was to see her story spread in the way that it did. "I'm forever grateful to all of the friends, family, and people who don't know me personally who shared, donated, and wrote to Penn State. You all mean so much to me and have helped me more than I ever thought people would," wrote Higgins. 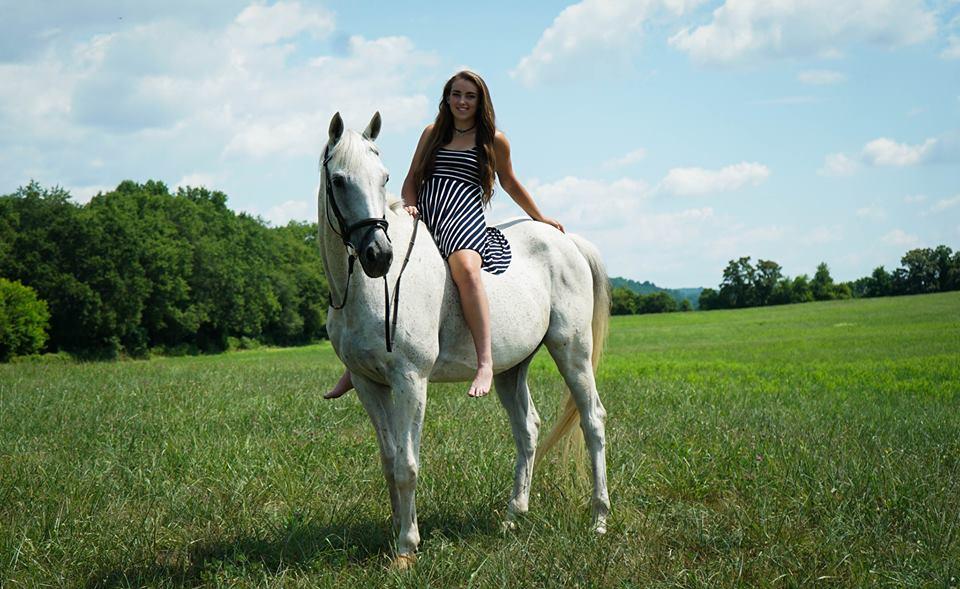 A photo of Rachel and beloved horse from Higgins' Facebook page

Eloise Ehrl-Corbo is the mother of a PSU ’16 graduate and another contributor to Rachel’s GoFundMe total. Upon reading about Rachel’s situation, Eloise couldn’t turn away. “I have a daughter, and I hope that if she were ever in a difficult situation, good people would come forward to help her. I also kept thinking about the WE ARE part of our PSU chant. WE ARE all part of a big family, and families take care of one another. WE ARE not just a University. WE ARE compassionate and supportive,” said Ehrl-Corbo.

Despite denial of her appeal for in-state tuition, through the donations of hundreds of strangers, many of whom are alumni, Rachel has truly seen what it is to be Penn State Proud. As Eloise beautifully put it, “She has a family of parents, alumni and students who will always be there for her, because WE ARE…PENN STATE!”