On February 3, 2017, Penn State sophomore Timothy Piazza was in critical condition after falling down the stairs at Beta Theta Pi’s bid night. The same night, pledge master Daniel Casey texted his girlfriend, “I think we are fucked. Like beyond fucked,” referring to Piazza’s medical state. “I don’t want to go to jail for this.”

Nobody called an ambulance until 12 hours after the initial fall, and Piazza died in the hospital the next day.

These texts, among others sent by the brothers of Beta Theta Pi, were revealed during the preliminary hearing held on Monday and Tuesday, BuzzFeed reports. The hearing was a continuation of the one held on June 12.

After Piazza was hospitalized, fraternity president Brendan Young sent a text saying, “At the end of the day, I’m accountable for it all. I’ll be the one going to court, paying for an attorney, and maybe put in jail.” Young also reportedly texted his girlfriend that Piazza “looked fucking dead.”

"Don't think you fully comprehend the situation. He looked f*** dead. At the end of the day I'm accountable for it all"— BTP President to GF pic.twitter.com/GByW2HPDmV

The list of incriminating text messages doesn’t stop there. The brothers expressed concern over the security footage and whether or not it contained evidence of the pledges being forced to drink. “When they see the video footage of the obstacle course, we will be done,” one fraternity brother texted.

Further text messages reveal that the brothers actively tried to cover up evidence of what happened that night. Texts were sent telling the brothers to ensure that the pledges “keep quiet about last night and this situation” as well as “clean the basement and get rid of any evidence of alcohol.” In addition to physical evidence, the brothers also tried to remove digital evidence by deleting GroupMe messages.

Message recovered from DiBileo's phone: "We tried our best to get him to the hospital…wish people listened"

Other text messages recovered by detectives show that the members of Beta Theta Pi knew the dangers of their hazing rituals, according to District Attorney Stacy Parks Miller. The prosecution asserted that not only did the brothers force Piazza to drink lethal amounts of alcohol, but they also failed to call an ambulance even though they knew he needed serious medical attention.

“The evidence all points to their consciously and knowingly disregarding the fact that another human was in grave danger,” said Tom Kline, an attorney for the Piazza family.

The defense opposed this line of thinking by claiming that Piazza drank of his own free will.

Before the events of February 2, Piazza and the other pledges received a message stating: “Get ready to get fucked up.” A lawyer for the defense, Rocco Cipparone, reportedly told BuzzFeed that this message indicated that Piazza “clearly” knew he was supposed to get drunk at bid night and that it was a “call to action.”

During his cross-examination of Detective Dave Scicchitano, Defense lawyer Frank Fina emphasized that Piazza could have left at any point in the night.

Parks Miller argued back that the brothers created an environment where Piazza was forced to drink as part of his acceptance into the fraternity. Scicchitano testified that the excessive drinking was considered a “rite of passage and the way to get in” to Beta Theta Pi.

Other defense lawyers attempted to deny the involvement of their particular clients. They claimed that their clients hadn’t seen Piazza fall or knew that he did, had not been involved in serving alcohol directly to him, or had not even been at the party following the “gauntlet.” 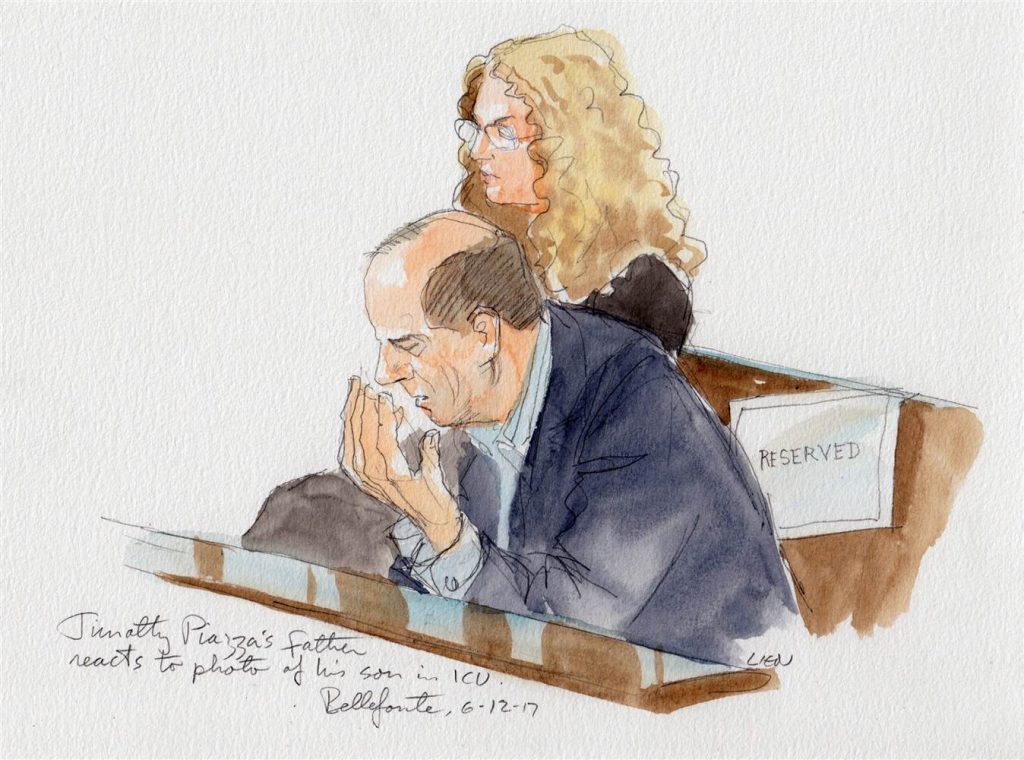 Whether or not Piazza was forced to drink became a focal point for much of the hearing and caused a great number of conflicts to erupt between the opposing sides. The attorneys on both the prosecution and defense frequently raised their voices. At one point, Defense attorney Andrew Shuban pointed and yelled at Parks Miller to, “Stop lying and tell the truth!”

Judge Allen Sinclair threatened to remove both sides’ attorneys and Parks Miller from the courtroom in an attempt to regain control.

For the parents of Tim Piazza, the hearing was incredibly emotional and devastating. According to one report, Piazza’s mother visibly cried during a recess. His father said that “Tim’s death was no accident” and that the hearings have “tried our patience.”

Tom Kline said in a statement, “It is excruciatingly difficult for the Piazzas to sit and listen to the callous and reckless misconduct of individuals who cost them their son and cost their son his life.” However, the family remains “determined steadfastly and resolutely to go through with this process so that justice is done.”