Would it be such a bad thing if Penn State banned Greek life? The aftermath of the Timothy Piazza tragedy

‘This wasn’t boys being boys. This was men who intended to force-feed lethal amounts of alcohol into other men’

What happened to Timothy Piazza during Beta Theta Pi’s bid night is nothing short of inhumane and heartbreaking. After an intense hazing ritual known as “running the gauntlet,” a severely intoxicated Tim Piazza took a fall down the stairs around 10:45 p.m. Throughout the night, his so-called “brothers” refused to seek medical attention, despite Piazza showing signs of serious trauma, and actively tried to cover up details of the night.

Following the investigation and trial of the incident, 18 brothers from Beta Theta Pi, and the fraternity as a whole, have been charged with a number of crimes, including involuntary manslaughter.

Some have tried to blame the incident not on Greek life, but on college in general. But the reality is, this tragedy was largely a result of dangerous behaviors associated with Greek life. Studies show that students in sororities and fraternities report significantly higher levels of drinking than the average student, even down to the amount of drinks they have per week. Greek life students also experience the negative impacts of drinking, like blackouts, more frequently than other students.

This tendency towards dangerous binge drinking goes hand in hand with issues of sexual assault and hazing. Statistics indicate students who join fraternities are three times more likely to commit rape, and many sexual assaults are associated with Greek life. Women in sororities are also 74 percent more likely to be raped than other female students.

As for hazing, Tim Piazza’s death is rooted in that dangerous culture most common among Greek life organizations, especially fraternities. Beta Theta Pi’s bid acceptance night involved various “drinking stations” that included an activity forcing pledges to pass a bottle of vodka down the line. They were supposed to finish it by the time they reached the last pledge, but the bottle was still so full of vodka that the pledge master forced them to pass it up and down the line until it was empty. During a recent interview with the TODAY show, Tim Piazza’s father said of the hazing rituals, “This wasn’t boys being boys. This was men who intended to force-feed lethal amounts of alcohol into other men.”

This kind of excessive drinking as a ritual for gaining membership in a Greek life organization is extremely dangerous, and Tim Piazza’s story is not the first of its kind. In 2012, a freshman at Northern Illinois University drank so much alcohol as part of a hazing ritual that his heart literally stopped. Since 2005, there have been 60 hazing-related deaths tied to the fraternity Sigma Alpha Epsilon. These horrifying statistics and stories show that this is a serious problem in Greek life.

These prominent issues, coupled with the death of Timothy Piazza, make a compelling argument for Penn State to ban Greek life altogether. The debate of whether or not to ban Greek life has been a fairly contentious one on campus since the first reports of Piazza’s death were released. In April, anti-Greek flyers were placed all around campus that called out Greek life for sexual assault, hazing, and alcohol abuse. 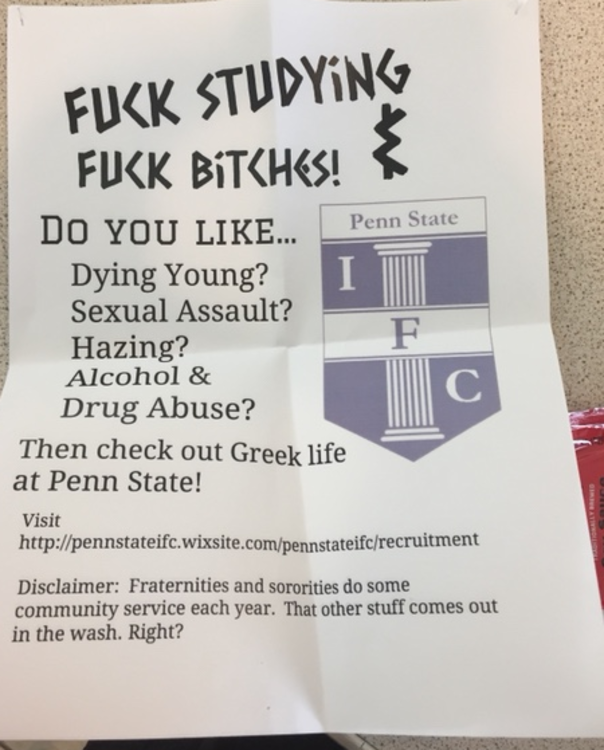 The university’s administration certainly seems to agree with getting rid of Greek life – following the report of Piazza’s death, the university immediately moved to put a sanction on all Greek life socials. The university then placed even stricter restrictions on Greek life by banning Fall 2017 recruitment and limiting organizations to ten socials a semester. At these socials, they are only allowing beer and wine under the supervision of a bartender.

Even after these new rules, some Greek life organizations have continued to violate university policies. During Parents’ Weekend, fraternities and sororities were given strict guidelines, including not serving alcohol. Nine organizations failed to follow these guidelines, and Sigma Alpha Mu broke just about every single one of them, leading to their two-year suspension.

"We're not going to give up until we solve the problem or shut down every house," Eric Barron said on @TODAYshow. https://t.co/M29qSwg14n pic.twitter.com/sSx5cdqznD

Greek life at Penn State is in need of a serious reformation to fix these problems, or they risk being thrown off campus entirely. President Barron has made it clear in his open letter to the Greek community that the fraternities and sororities are on their last leg, their only choice being to either fix their behavior or be disbanded.

Tim Piazza’s story is a devastating one that should never be repeated again. With these organizations causing the tragic death of a student, encouraging blatantly dangerous behaviors, and failing to follow both university policies and the law, would it really be such a bad thing if Penn State banned Greek life?