Preacher vs. Teacher was the debate we’ve always wanted

The heroes we need, but not the ones we deserve

Two Penn State icons, Soc 119 professor, Sam Richards, and Gary Cattell, the infamous Willard Preacher, decided to have some fun with their PSU fame and battled it out Monday night for over two hours in the Sparks building on everything from sex to religion and even crazier topics than you can imagine. For those of you who didn’t know about this glorious event: don’t worry, The Tab’s got you covered.

All beans were spilled, dirty secrets were dished and absolutely nothing was off limits. Like, spoiler alert: the Willard Preacher confessed that he was not a Christian all his life and partied hard in college. Yes, the Willard Preacher used to be a pothead. Not so innocent after all, Gary, huh? Aside from that shocking revelation, shit got weird. Like they told us about their sex lives weird. So brace yourself. 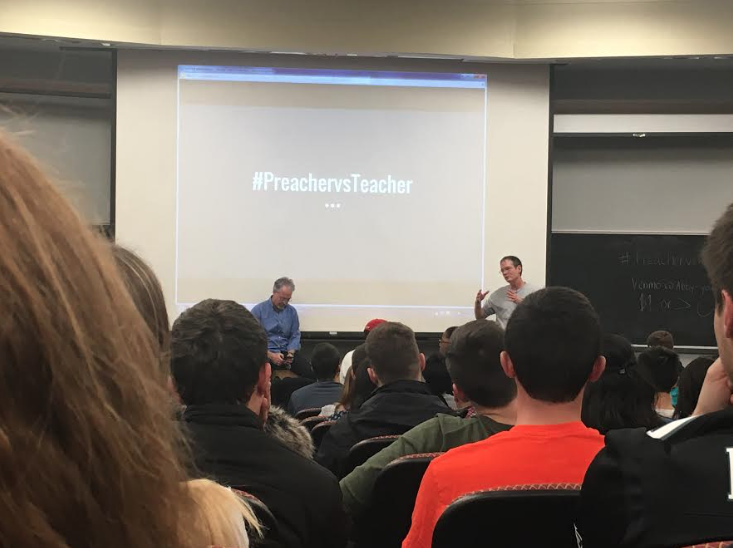 This debate was created by a group of classmates for an assigned Soc 119 project. The debate benefitted Haiti and it was a success to say the least. Filling up the entire room, students were even sitting on the ground in the aisles or watching from the doorway entrance. Yeah, you could say people were pretty damn curious about what absurd things would come out of these two mouths.

And so it began. They started off by introducing themselves… as if there could possibly be a person in the crowd who hasn’t heard of them before. These guys are PSU legends and even they know it.

“They call me the Willard Preacher… or at least when they’re being nice,” said good ol’ Gary. “Occasionally I’m called a racist or bigot to make me feel at home.” 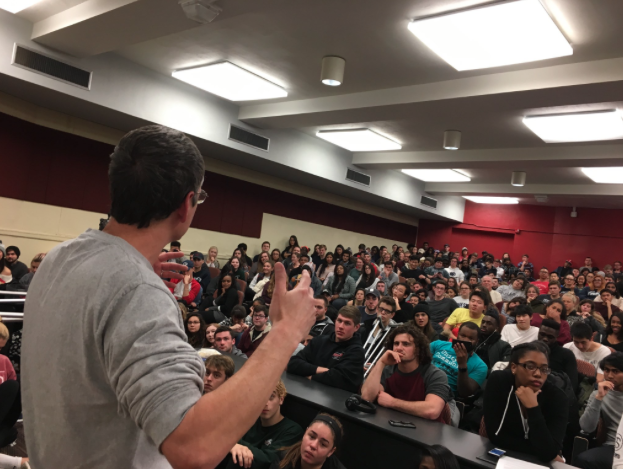 Oh Gary, there are not enough words or labels to describe the bizarre behavior that consumes your everyday life

While both of their reputations clearly precede them and they are notoriously known for having no filter, the big, bad Willard Preacher unsurprisingly does not exactly see eye-to-eye with the laidback race and ethnic relations professor.

“I refer to myself as an atheist. It’s the way I conceptualize God or the eternal principle,” said Richards. “I live by a moment to moment meditation.”

Then he called the preacher “so skilled” and claimed he “can’t win with him.” LOL, OK. The only thing the preacher is skilled at is attempting to make people feel bad about their long list of weekend sins. Nice try, Gary but PSU students are professional sinners. Always have, always will be.

The event organizers in the front of the room prepared debate questions that dove right into the pool of controversy, naturally. LGBT was the first topic of discussion. 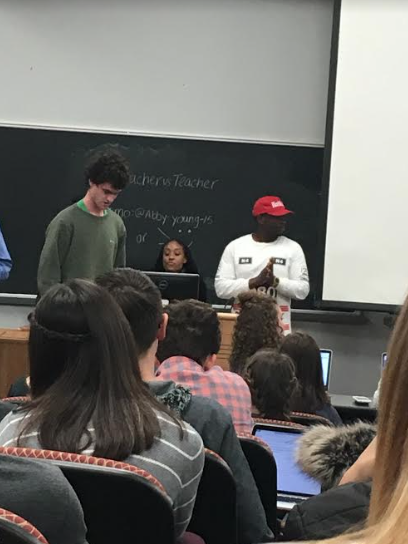 Do you believe people are born gay or straight?

Sam Richards: Yes and no. People exist on a continuum. It’s a continuum of choices and urges we have that are sometimes natural. I can bring myself to have feelings towards the same gender. It can change over time by choice.

Willard Preacher: I don’t think they’re born that way. They are born with a sex drive. My religion doesn’t believe feelings or thought processes are a good indicator of what’s true. They can come and go. You have to put your feelings aside and look at something concrete. It doesn’t make any sense to put your private parts onto the same gender. If sex wasn’t pleasurable it would be a rather strange thing to do. It’s like eating food. You eat enough food to fuel the body.

So, in other words, sexual intercourse is a metaphor for eating food. You learn something new every day.

“There’s a reason for sex. It’s pleasurable because nature itself wants us to do that. We take advantage of sex. Going back to creation and God, we see transgender relationships in the animal kingdom,” said Richards. 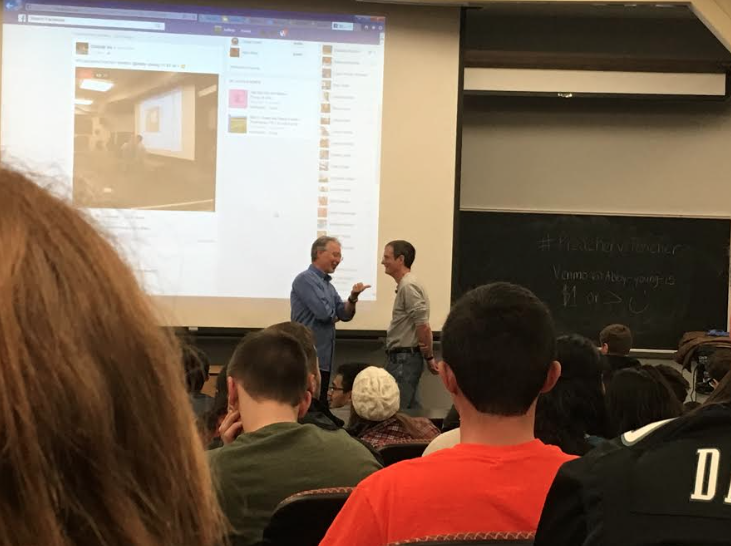 While on the topic of the big man upstairs, Richards literally did not hold anything back when it came to his spiritual beliefs.

“I felt God last night when I was making love to my wife. I felt a deep, live experience of love. I felt connected to her and myself. I didn’t need drugs or other things. I experienced God,” said Richards.

Gary’s reaction was priceless. Pretty sure that doesn’t fly in Willard Preacher’s religion of Orthodox Christianity. Instead, he suggested we ask God to reveal himself to us in a way that’s undeniable. The man asks a lot from us if you haven’t noticed. 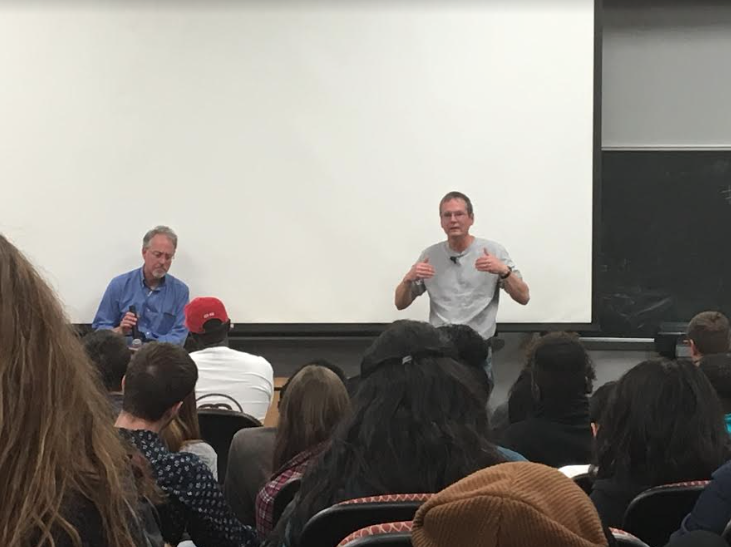 They finally put the pause button on the whole religion spial and went right into the heart of college students lifestyles: hookup culture.

What are your views on premarital sex and why does it seem so accepted among college students?

Sam Richards: I lost my virginity when I was 14. Sex is just something I did and it felt good but I was looking for something more, to be more connected with the world. It wasn’t until my marriage with my wife when I realized sex was beautiful and mysterious and I understood sex. Looking back on those years I wonder how much I missed. I was engaged in sex but not the quest for the divine. This hookup culture is very problematic. Life is so much more. That’s just like the outside of the apple. You’ve never cut it open, you’ve never tasted it. The tasting only comes when you go beyond it. It can be dangerous. You miss out on this deeper journey. 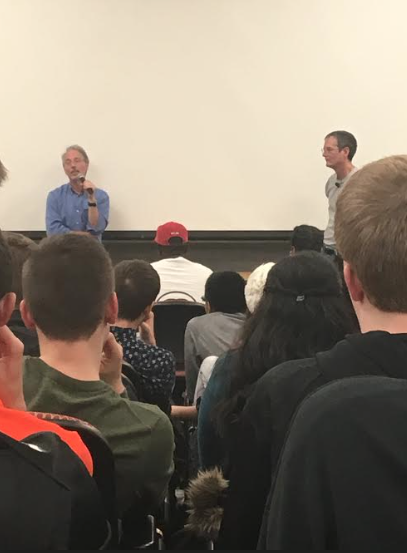 Safe to say we will never, ever be able to look at an apple the same way again. Sigh

“Sex before marriage can be beneficial, but for most people it’s not because you bring the baggage. You just bring the memories or techniques. We live in this shallow space where we think the images are the images we should follow,” continued Richards.

Well, there you have it. Sex, religion and everything else that Sam Richards and Gary Cattell could rant on for hours and never get tired of. These two are a tag team if we’ve ever seen one. Maybe one day when you see them on TV, you can say you heard their crazy comments here first.