‘If you’re disheartened, use this as an opportunity to become more politically active’

Penn State’s “State of State” is an organization that hosts speakers to create a dialogue on the present and future of the university. Yesterday, the organization hosted an event called the “Election Reaction Drop Box.” It began Thursday afternoon from 10am to 3pm in the HUB and is continuing on through today. The club took it upon themselves to provide an outlet for students to react to the election through notecards in a dropbox, as well as discussion.

No matter what race, ethnicity, religion or political beliefs you have, we can all agree that this election has caused us to care more about world issues than ever before – especially as college students voting for the first time. To say that the outcome left our country divided and scattered is an understatement. These post-election feelings are something we physically cannot bottle up. As we come across more and more Facebook statuses and social media posts, we must understand and recognize that that is how some cope with our new reality. For others, it is by having open dialogue or writing their feelings down. 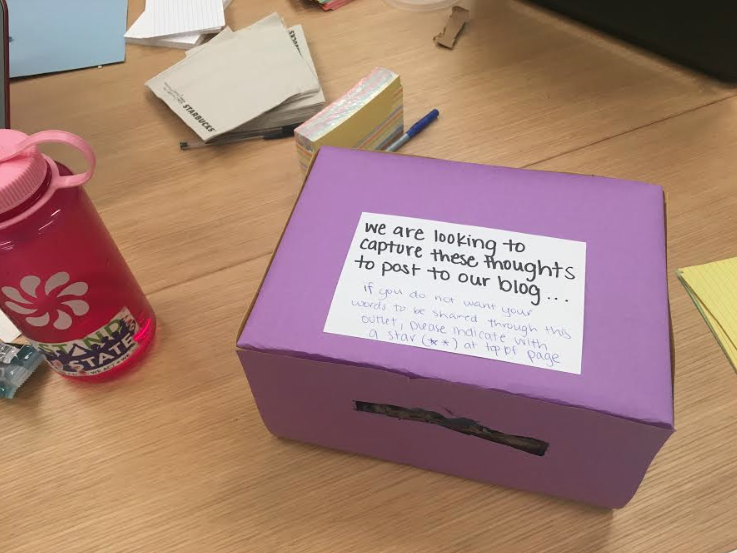 The Facebook event read, “With the results of the election in, State of State will be hosting an event for anyone passionate about the decision made by the United States of America. No matter which party you identify with (even if it’s none of them) you are invited to share your voice with us.” 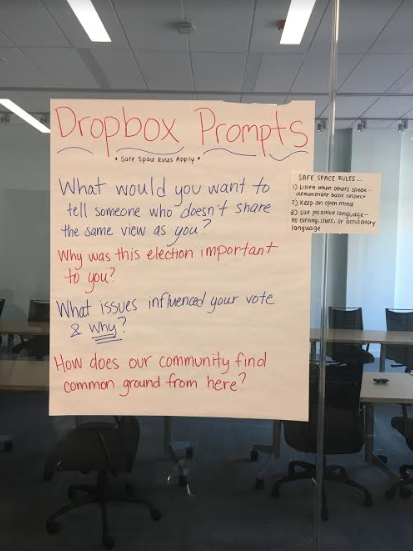 What’s amazing is that you have no idea what a difference this could make to someone who struggles with talking about their political beliefs to their family and friends, is outraged by the outcome of the election, or is concerned by the latest behaviors of people across the country. State of State has created a safe space for Penn State students in a sensitive time for many. 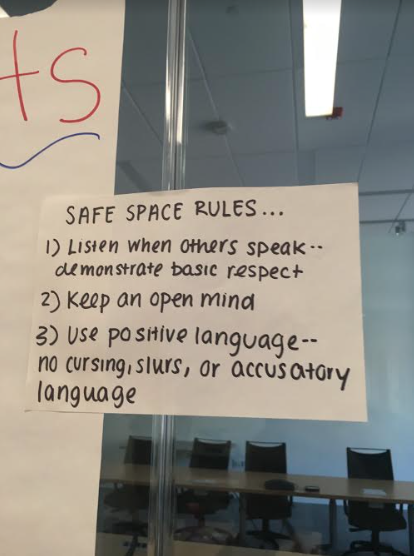 These are real people with real feelings right here on our campus. Many people can relate or understand the thoughts and perspectives of both participants and club members at the event.

The Tab visited the Election Reaction Drop Box to dig into how the election personally affected students here at Penn State.

Emily Yocom is a junior majoring in International Politics and a Hillary Clinton supporter. 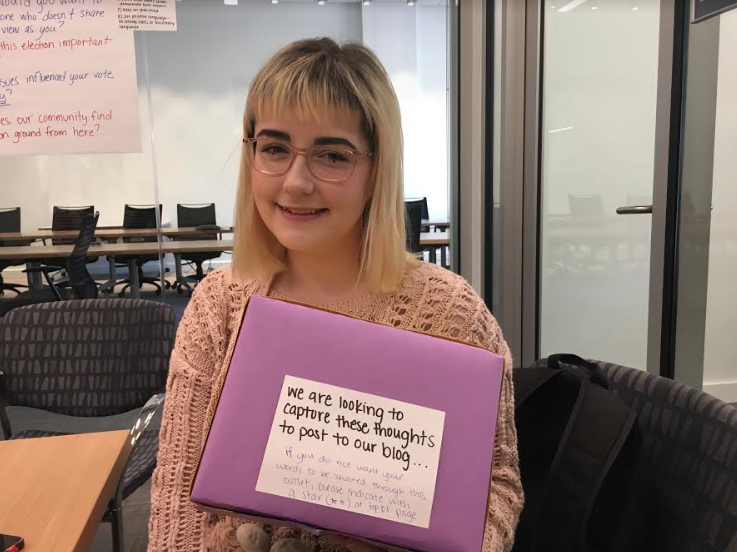 What would you tell someone who voted for Donald Trump?

I would want to know if they understand the impact of who they are affecting, especially when it comes to minorities.

Why is this election important to you?

My friends have told me they are scared of being deported. Having a rapist as a president…what is the message that this is telling males across the country?

What issues influenced your vote and why?

The refugee crisis. Wanting to ban Muslims is outrageous. Trump was talking about the shooting in Florida in the nightclub and he said it was a terrorist, but also claimed it was a refugee. That wasn’t true. No one fact checked the refugee part. The issue is that he lies and no one stops him.

Do you personally know anyone who voted for Trump?

Yes, a guy in my class and he was ashamed. So many people voted for Trump and were quiet about it. I think it’s because they know he’s a racist, bigot and sexist.

How does our community find common ground from here?

The best way to come together is communication, but it’s really hard to break the boundaries such as racism and sexism. It’s hard to have an open conversation with people who want to take rights away from me and my friends.

Why do you think people didn’t choose Clinton?

I get that she’s not liked but I don’t understand how people chose Trump over Clinton. How could an email server be worse than that man?

Aside from students who visited the event, The Tab also met with those in charge of it and involved in the State of State club. 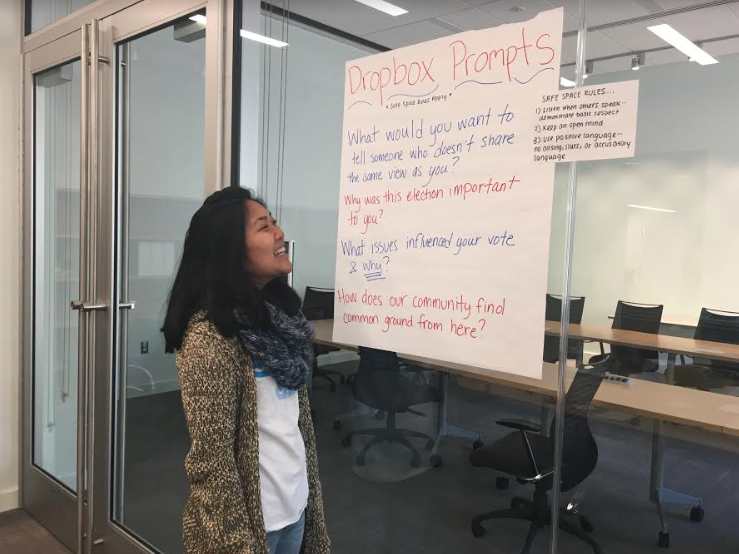 Our organization is not politically charged. Our exec team is divisive and it’s not a problem. We’re a bipartisanship. I care about specific issues, not necessarily a candidate. As a health policy major, I care about health care, climate change and education. It’s hard to support a person who doesn’t fully encompass that.

Why was the election important to you?

It was important to me as a first-time voter and because I want to go into policy making. It feels like my vote actually affects a lot of people now. I was never the biggest Hillary supporter, but as the election went on she became more inspiring to me.

How does our community come together?

It’s hard. I think that our community is civil, but so many places it has caused a rift and protests across the country. Time is the only way to tell.

How would you say the Election Dropbox has gone so far?

People have found it relaxing. Some people write on a notecard whereas others get in really long discussions. It’s beneficial either way.

Next, we met with Katie Formichella, State of State’s PR Director and a junior majoring in PR and Psychology. 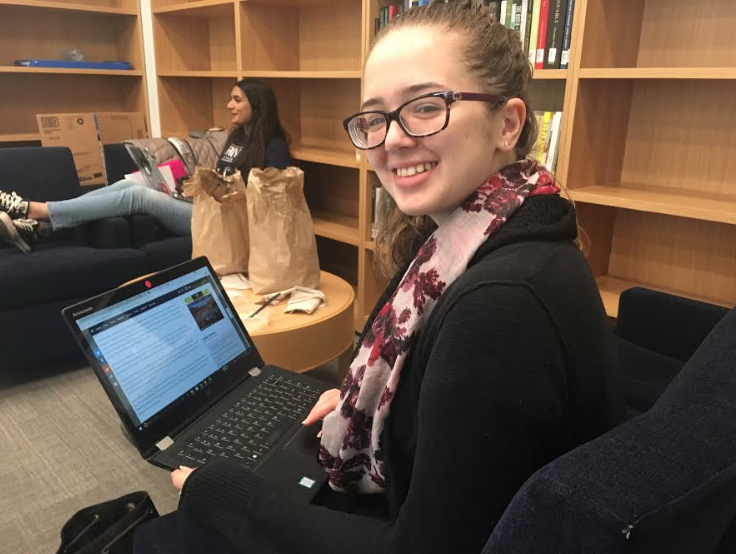 What would you say to a Trump supporter?

How can our community come together?

Last but not least, we met with Clare McHugh, State of State Special Events Committee Member and a sophomore majoring in Biomedical and Mechanical Engineering. 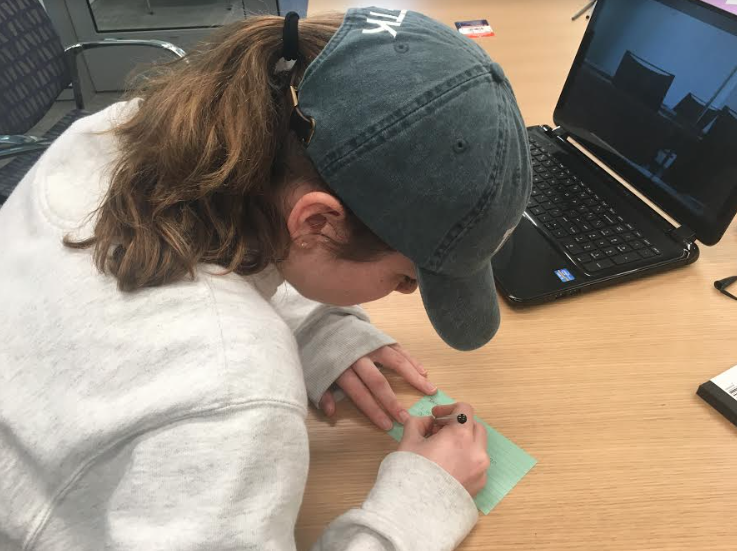 Do you have strong political views?

Not necessarily strong, but it was an important election. I was stuck in the middle.

No, but I think it was so divisive and disheartening. That’s why this event is so important because we have to accept what happened: the good, the bad and the different. We can find some middle ground and positivity that can bring people together. If I were leaning with a candidate, it would have been Hillary. Her messages were a lot more positive.

How can we find common ground?

In Hillary’s concession speech she said you have to have an open mind and give Trump a chance. That’s the situation we’re in and you have to make the best of it. We have to see what direction the country will take. If you’re disheartened use this as an opportunity to become more politically active. You have to go after the issues you care about.

Every single student in that room had an entirely different opinion from one another, and that is how we enhance our perspective on the world. It’s not about the candidates, the issues, the winners…it’s about humanity. At the end of the day, the most important part of this election is how we can come together despite our differences in opinion. We have to continue creating that dialogue with the people around us because we all deserve to have our voices heard. This club has witnessed firsthand that finding common ground is possible, even in arguably the worst election in history. More clubs and organizations should follow this example. We’ll be better off not only as a community, but as a country because of it.