‘I don’t shout it from the rooftop, but I don’t silence myself’

So last night this whole election thing happened (you know, that one we’ve been freaking out over for the past year and are continuing to freak out about) and Donald J. Trump pulled off the greatest plot twist in the history of plot twists by winning the election that sent shockwaves through the entire country.

It was a loss of epic proportions for those who wanted to elect the first female president, believed Hillary was the better candidate, or feared this exact outcome. But for those who have been loyally on the “Trump train,” it was an unbelievable victory.

Roger Shouse, an education and policy teacher in the College of Education at Penn State, is one of the few professors that has no problem voicing his political opinion… and in this case, on his vote for Trump. And people weren’t that welcoming, as you can imagine.

Shouse is very active with his frequent political posts on Facebook, posting almost every day, even every hour, on why he is both very much for Trump and very against Clinton. In fact, his entire timeline revolves around political articles or pictures. He’s also the faculty sponsor of the PSU students for Trump group. We sat down with him to find out: why Trump? 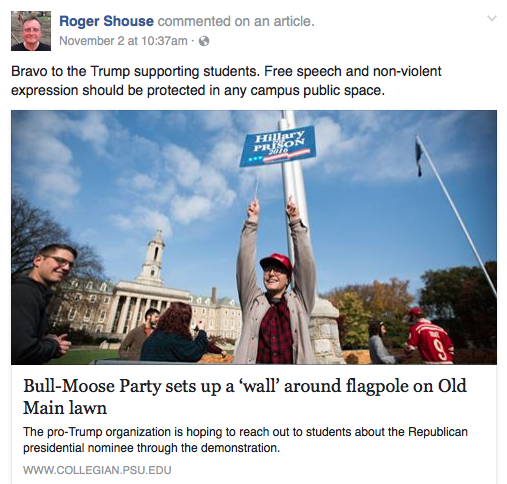 What made you decide to vote for Trump?

My first choice was Rand Paul. I’m a “small r, small l” republican libertarian. I believe in limited government and individual freedom. I also think it’s important for America to protect its borders and reduce illegal immigration. In addition, as a professor of education who supports school choice and local control of schools, I liked Mr. Trump’s opposition to common core education policy. I prefer Mr. Trump’s position on health care and the Supreme Court. In terms of economics, his plans are far more feasible and responsible than Clinton’s. In terms of foreign policy, I think he’ll actually promote more peace around the world than Clinton would have. I mean, just think about Benghazi, the shipments of arms to Syrian rebels, etc. Finally, I was really growing sick and tired of the do-nothing Republicans in Congress. 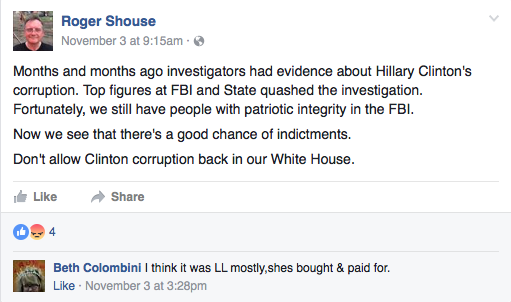 What made you publicly vocalize all of this?

I’ve always been outspoken. Note that I do not mention this in the classes I teach. Of course, if a student asked me my opinion, I’d share it. But I’ve always tried to be respectful and objective in my teaching with respect to others’ viewpoints. 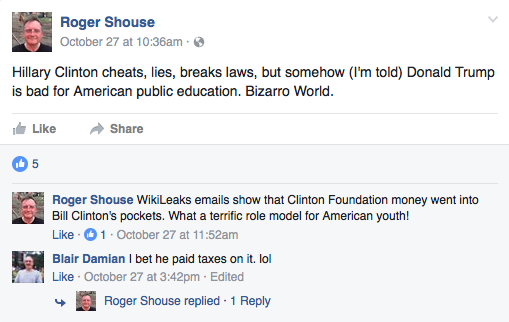 Do you have friends or family who are Trump supporters?

Most of my friends supported Clinton. My daughter supported Trump. She’s my “whole family,” basically. I did have several “discussions” on Facebook with friends and colleagues who supported Clinton. They often did not end well. But there are still a few who love me! 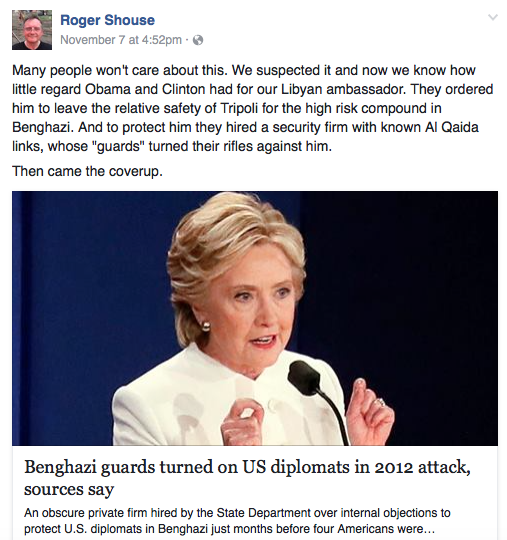 Was it hard for you to share with others that you’re pro-Trump?

Not really. I don’t shout it from the rooftop, but I don’t silence myself. 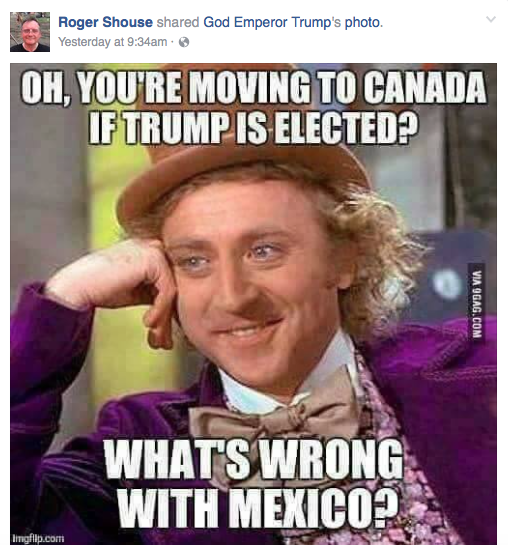 Were you surprised by the outcome or did you see it coming? 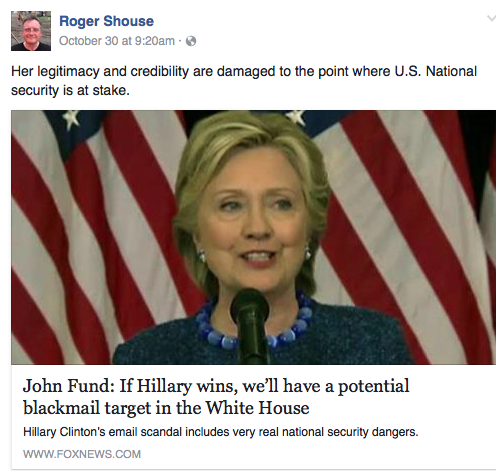 What do you think about the stereotype that the majority of voters were uneducated or only white males?

Well, that’s rubbish. That’s a silly stereotype. Are there not vast numbers of uneducated people who voted for Clinton? That whole argument falls apart upon inspection. But it does make some Hillary supporters feel more comfortable. They need to think that we’re all racists. Are they all communists? I doubt it.

In what ways do you think he’ll be a great president?

I don’t know if he’ll be “great.” But he will keep the nation from spinning off onto a terrible political path. I hope he turns out to be great. The first time Reagan ran, I voted against him. But today I consider Reagan to have been one of the two greatest presidents of my lifetime. The other was Kennedy. 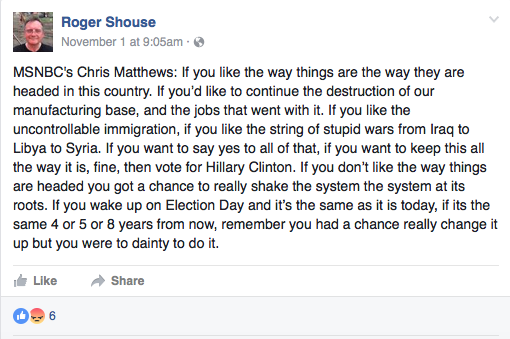 Well, it turns out that all these political posts worked out in his favor after all. Shouse may have went on a limb by being one of the only professors to make his political opinion known to the public, let alone praising an unlikable candidate like Trump, but his courage and dedication to this election is still inspiring nonetheless.

Shouse clearly cares about this election and used his posts and influence to educate others. With the stream of Facebook rants flooding your newsfeed since the results came out, it is rare and unique to find Trump supporters, much less professors, like Shouse who have never stopped being proud of their faith in Trump and will not apologize for what some would deem as a “socially unacceptable” post.

Only at Penn State.