Is it too late now to say sorry?

For those of you who believe that Penn State is better than the event that proceeded the game on Saturday night, you aren’t alone. Chris Landolfi recently started a Go Fund Me page in order to help repair the damages caused by the riots after beating Ohio State on Saturday. Students caused $18,000 in damages, and this page is a way to show that we are better than that.

Landolfi stated on the page “As proud as I am of what the football team accomplished, I am embarrassed of what happened next.” He goes on to urge everyone, whether they were involved or not in Saturday night’s “celebration,” to donate to the cause. 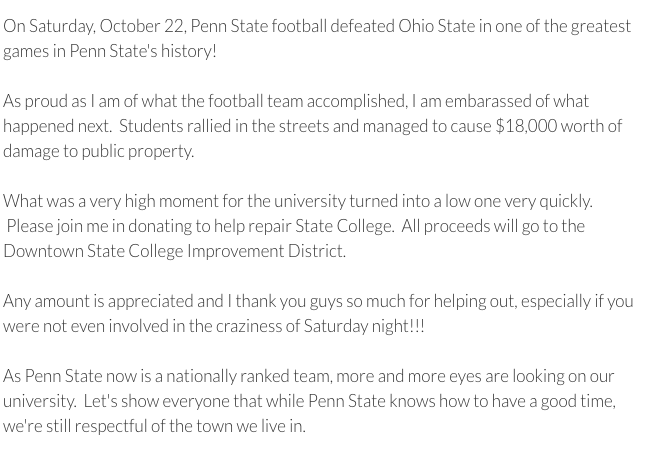 We can all agree that the take down of OSU is a victory, for many of us the largest victory we’ve seen to date, but that doesn’t excuse our behavior after the game. The damage consisting of five street lights being pulled down, light globes being shattered, street signs that are now missing, and numerous plants and landscape was ruined.

We had an amazing exciting win and quickly turned it into something to be ashamed of, luckily we have students like Landolfi who are willing to take action. He said himself, “I felt really bad. We have a good town and gown relationship with State College, and we don’t want to test that.”

So far $575 has been contributed to the $18k goal. Students and members of the PSU/State College community hope that this number will increase substantially, because our win was a great thing and much better than our behavior that occurred on Saturday night.