Before I start, I know. I know I’m a white male in his twenties who has every door and possibility open to him. I know the strife and poverty that has probably never struck my ancestors is a very serious issue for many. I know I’ll never be discriminated against because of the color of my skin, my religious/not-so-religious beliefs, my gender, etc. I know what white privilege is, and I know I have it. I completely understand. Oh, I know.

But this isn’t meant to be some large political piece from a white man where I’ll boast about how everyone’s too sensitive, because the United States has been making amazing strides towards equality and improving civil rights in the past few, short years (except the couple centuries set-back events of racially-charged police brutality, which is very serious).

But, we ARE too sensitive. We’re too politically correct.

Penn State has been too civil about this case. So sick of this politically correct apologist society. Grow a pair.

Our generation has grown up, for the most part, thinking we’re the best. Everyone deserves an award. Everyone deserves recognition. In some melodramatic alternative universe we’ve created, our self-righteousness rules everything. If we don’t get what we want immediately (which sometimes isn’t fast enough), all chaotic hell breaks loose.

Comedians, who make their living off of poking fun at all types of people based on stereotypes, are now refusing to perform because of the hate they’ll receive. Jerry Seinfeld and Chris Rock are just a few that refuse to visit college campuses because they’re too PC.

I would make a Penn State joke since they lost today but people are just too politically correct and butthurt on Twitterland.

Colleges are the place where, generally, ideas are free to flow among curious and interested students in a more liberal setting than really anywhere in the country. Everything is protested, someone has a problem with what someone else said because it’s not sensitive to their beliefs.

Donald Trump is a prime example of what used to be acceptable in everyday speech. Now, before I dive into this, let me inform you I am in no way a supporter, believer, nor do I recognize anything the Donald says as fact, BUT he says whatever he wants. Nowadays, and I believe this is why he rose to popularity so quickly, no one can speak their mind without pissing some large anti-defamation group off, but he does. All of the support I’ve heard for Trump isn’t that what he says is factual or that he’d make a great president, it’s that he says whatever the fuck he wants to! But people are scared to even speak the slightest bit of ignorance for the overdramatic and mass quantities of hate they’ll receive back. You can’t even make a slip-of-the-tongue in today’s world without being harassed for being a bigot.

Here at Penn State, this has become a major issue. You’ll always find a group protesting in front of the HUB or on Old Main Lawn. It came to national attention this year when, in order to prevent even the smallest “hate crime”, or microagression, President Eric Barron released a statement saying that all hate, no matter how small or unintentional it was, be reported to campus officials to prevent anyone from feeling uncomfortable or discriminated against. God forbid someone doesn’t look you. Because that’s what we’ve been taught, that you must like everyone and be nice and never speak your true feelings of people because god forbid you hurt their feelings; then you’re the asshole. 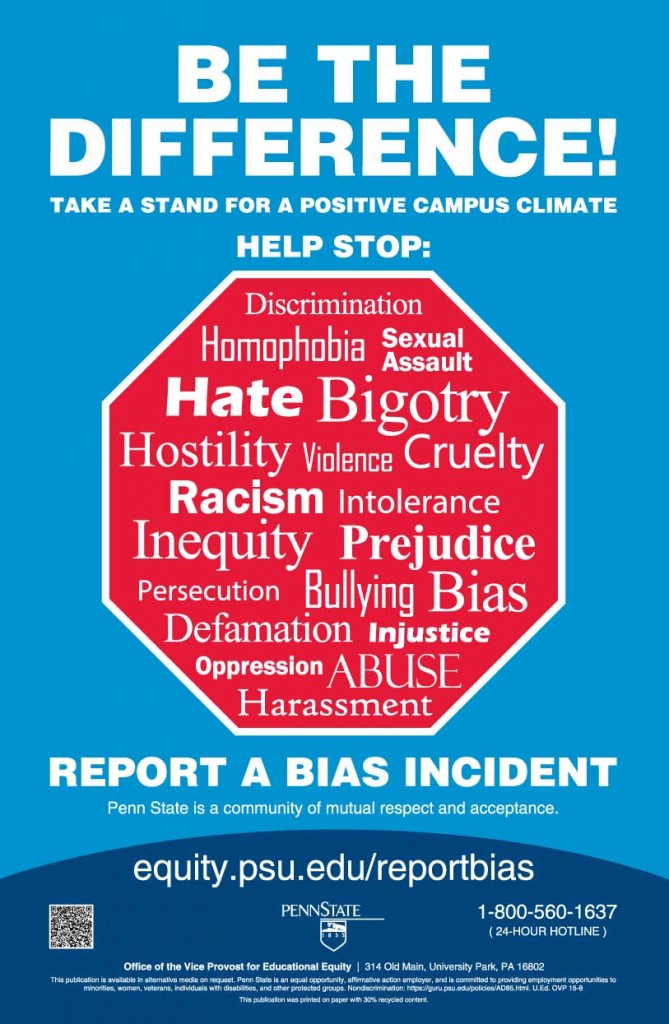 What I’m trying to say is that you’re not all winners; you’re not all special. Out of the 7 billion plus human beings on this earth, you, my dear, are not special. So if someone offends you, grow up and deal with it, because not everyone will like you. Look at Donald Trump and ISIS – everyone hates both of them but they don’t seem to mind.

But be smart, because you’ll never know when you’re going to offend the wrong person.