The Oregon track team continues to look toward its NCAA title hopes when they visit the Penn Relays this week. The team will travel to Philadelphia in preparations for the PAC 12 Championships in a couple weeks, and for Head track and field Coach Robert Johnson, it’s a pacing point as the team gears up for championship season.

‘It’s definitely one of those special meets that everybody should get to experience,’ Johnson said.

‘I think it’s the fact that it’s built around relays, it kind of reminds us how great of a team sport track and field is,’ Prakel said.

‘We’re in the middle of a hard training block but when we taper towards nationals we’ll be able to compete with those guys. Our mid-distance group is very strong and we all have those regional times and now is a good time to focus on the workouts, sweeping PAC 12’s and taking nationals is at the back of our minds but we’re taking it day by day.’ 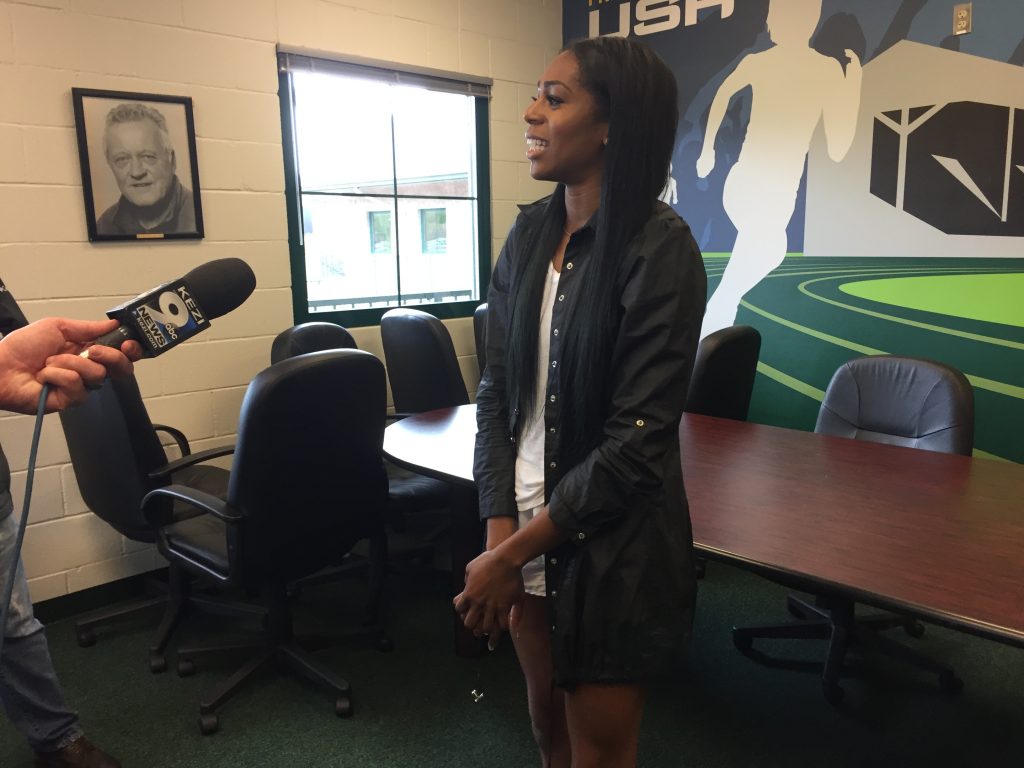 This weekend is another opportunity for new 800 m collegiate record-holder Raevyn Rodgers to enhance her performance on the track, and even after her record-setting performance at the Mount Sac Relays, she still feels that she can run faster.

‘I think I can go faster, I felt good afterwards it didn’t feel nearly as bad as after Indoor nationals where it felt like my hamstrings were on fire,’ Rodgers said.

Rodgers is also excited for Oregon track fans to travel with the team and to show the Oregon tradition in another part of the country.

‘It’s always fun when we make a huge trip because we’re bringing the whole TrackTown with us, it’s exciting to see a new type of culture. The East Coast takes indoor seriously and having Penn Relays be ‘the biggest meet in the world’, it’s like a festival for track,’ Rodgers said.

It’s my first time going to Penn Relays, they’re so excited and we’re like celebrities because they don’t see Oregon much at many functions. It’s the USA vs. World concept but on a collegiate level.’

As Coach Johnson prepares his team for this weekend, he stresses the importance of improvement.

‘What you’ll start to notice as we get closer to the championship season is that everything will become heightened with a sense of urgency on the things you’re doing and that comes with a level of scrutiny,’ said Johnson.

Following the Penn Relays, the rest of the team will travel to Oregon State for the OSU High Performance meet before returning to Eugene for PAC 12 Championships May 13-14.

Fans can follow the action on USA Track and Field live stream.