The Churchill High School Native American Student Union  is marching with UO students and Eugene residents in solidarity with the water protectors of Standing Rock. 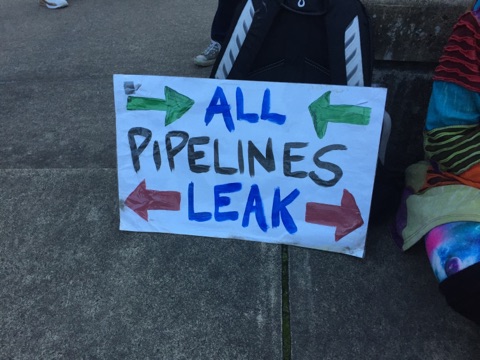 People made signs to show their support

The rally comes in support of the Natives of Standing Rock, North Dakota and their fight to protect stop the Dakota Access Pipeline, an oil pipeline threatening to run through indigenous land and its water supply in Midwestern states.

‘We are here today to say that we stand together, this march is about unity,’ said a Churchill High School student. 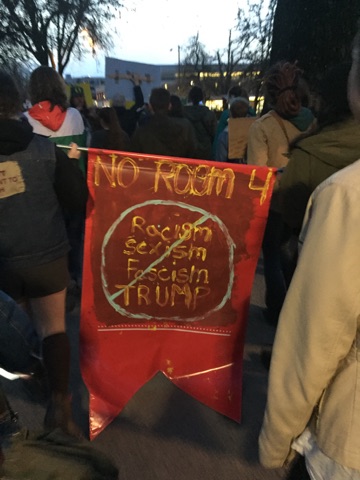 One of the signs on the way to Kesey Square

Churchill High School was accompanied by Gathering of the Sacred Pipes Sundance Chief Joe Morales, who was there to show support for the students and his son, Sequoia who is part of the Churchill leadership.

‘Any Native movement has to be a spiritual movement first we have to call the creator to help us help the people,’ said Morales.

‘When people take a stand traditionally, when people have put themselves in the lines of danger they’ve been honored.’ 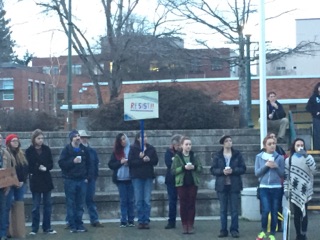 Supporters in the amphitheater

Rally attendees such as Sarah Why came to show their support for those who have been fighting this national issue for the past six months. For her, today was about recognizing the worth of those who have participated whether it was on the reservation or in town meetings.

‘I think the essential worth of all individuals is in question here otherwise the pipeline wouldn’t have been approved in the area that it was,’ said Why.

‘Thousands [of people] are standing up and living and contributing their lives for well over 6 months. Those who have essential worth are just as valuable as those who showed up to a single town hall meeting and got rejected.’

The marchers will come back to the amphitheater following the speeches at Kesey Square for a closing prayer.