The price we pay: students react to recent tuition hike

UO students will be faced with another increase in tuition for the 2017-2018 academic year, university President Michael Schill announced Friday. The tuition hike, which will raise payments $945 a year annually, will increase total costs 10.6% for in-state, and 3% for out-of-state students.

“I regret that I have little choice but to accept the TFAB recommendations on tuition and fees for next year,” Schill said in his statement. 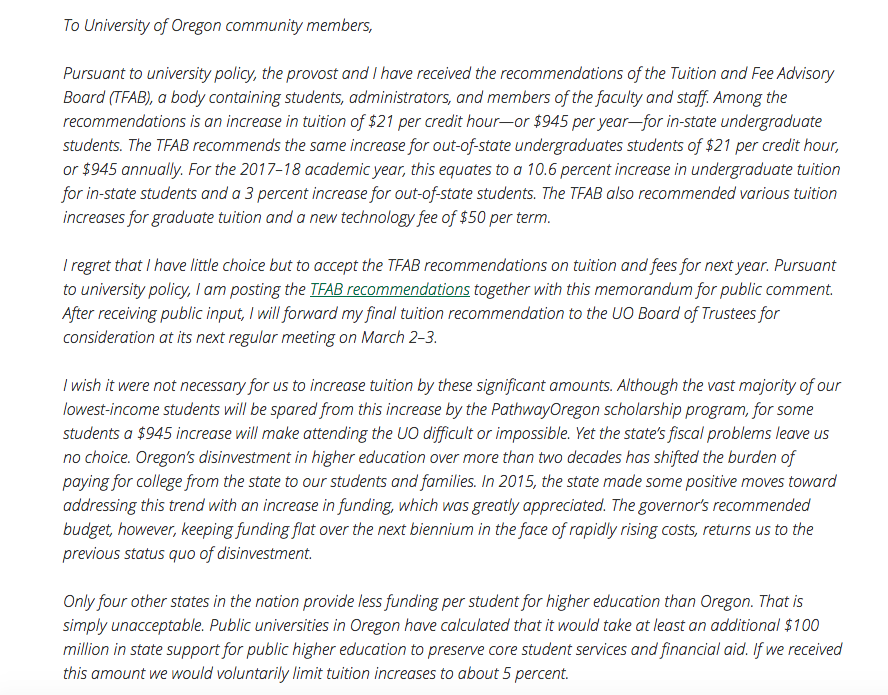 Despite public outrage, Schill noted that the increase is due to policies given by the Tuition and Fee Advisory Board (TFAB). While the current prices are a recommendation from the TFAB, Schill has issued them for the public viewing, and has opened them to public comment. From there he’ll take any comments to the next the University’s Board of Trustees meeting on March 2.

The announcement was met with an upset response from students, many of whom feel it’s unfair when they’re already paying an absurd amount every year.

“Tuition increase seems to be based in same unsound logic. I wonder how current funds can be reallocated within the university to demonstrate a more equitable emphasis on things outside of athletics,” said a student who wished to remain anonymous.

It’s not uncommon for many students to have a hard time financing their education as it is, and will become even more difficult after this.

“I find it interesting that while we have the most absurdly high and debt-causing tuition in the world, students are still being put in more and more difficult positions by the people who claim to serve them,” said freshman Sophia Santana.

THERES A 10.6 PERCENT INCREASE IN TUITION FOR NEXT YEAR?!?!?! WHAT THE ACTUAL FUCK IS WRONG WITH UO

While it effects the majority of the student body, Oregon Pathway students, Oregon residents who are Pell-eligible will be exempt from this measure.

“I think it’s good that Pathway Oregon Students won’t be susceptible to the tuition increase, but worry that for other students a approximately 10% tuition increase may make it impossible/a barrier to attend UO. I also think it would be useful for less money to be allocated to athletics,” said another anonymous student.

“So many students already struggle with worrying if they can pay for just the standard four years. This adds to additional pressure and stress, giving students the worry that they can’t even afford to make it to graduation”, said sophomore Jorden Cohen.

Overall, students wish that President Schill was more transparent in raising tuition would be a last resort when getting the necessary funds.

“I think that the email was really interesting. It’s good that it doesn’t affect Pathway Students. I guess I just would have liked for him to be more transparent in his efforts to raise tuition as a last resort – what could the UO have done differently?” said freshman Maddie Wela.