Deady Hall, one of the UO’s oldest and historic buildings, is going to keep its original name, UO president Michael Schill announced Wednesday. The decision comes after public scrutiny following findings that UO founder Matthew Deady supported slavery during the Civil War among other derogatory remarks.

Schill released a statement to the university and the UO community on Wednesday, which said:

‘Certainly he is not somebody we would consider praiseworthy in all senses.  I do believe he had racist behavior. On the other hand, he did a lot of good things.’

‘I came to the conclusion, weighing all the factors, it didn’t overcome the presumption against denaming” buildings at the UO.’ 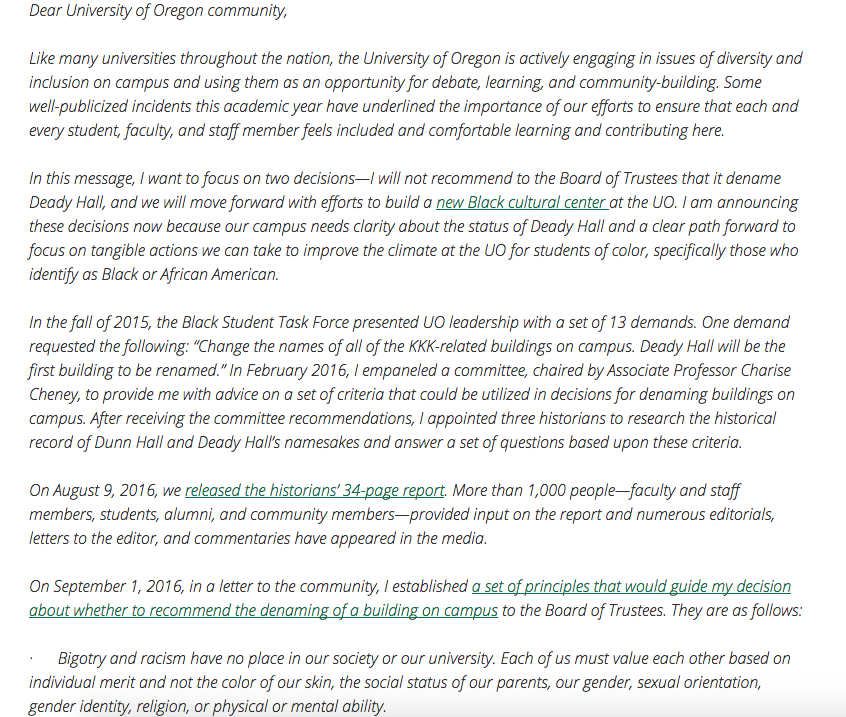 Schill’s letter was released on January 25

According to the Register Guard, UO’s Black Student Task Force demanded that the university take away Deady’s name from the building back in November 2015  because black students claimed that they ‘shouldn’t be subjugated to walk in any building named after people who have vehemently worked against (the) black plight.’ With that, the students insisted that Deady Hall be renamed.

President Schill invited members of the Black Student Task Force to his house on Monday night to discuss his decision.

Overall, despite conflicted feelings from students, President Schill feels that the university did its part in uncovering part of the school’s history and says it shouldn’t feel ashamed for doing so.

‘We did a service in getting out to people information that they never knew and that they shouldn’t forget. That’s one of the reasons we didn’t rename the building. We don’t want people to forget the history,’ Schill said.