Too’s Spirits Under High sign stolen days before closing down

‘We can’t allow people to disrespect us’

That's right, the main sign as in the big, neon one that once hung above the entrance. They were offering a $100 reward. A police report was filed over the theft on October 27.

Too's Spirits Under High is closing for good on October 30 after spending the better part of the last year trying to #saveToos. It has become known as the little hole-in-the-wall bar that could for resisting efforts by Campus Partners to push the business out of its building on High Street. Too's gave Ohio State a Cinderella story for the ages—well kind of.

$100 for whoever gets us our main bar sign back. We appreciate you guys loving us, but come the fuck on, you can’t be doing us like that! pic.twitter.com/EOp1jhgTa2

Filing a Police report for our sign.We’re going to laugh so hard when your friends turn you in and your parents kill you for being a dumbass

Too's has a very devoted following and clientele, this has been proven with the hunt for the sign as the bar was going into its final days.

We’re out on the hunt for our sign. We have our Toos crew out knocking on doors. We got a few great informants. We gonna getcha.Stay tuned!!

Eventually the thief was found, and Too's employees searched for them. At that point the police had already been contacted. The thief was given many chances to return the sign, and since they did not it is now an active criminal investigation.

Too's owner Scott had this to say about what happened:

"We gave the kid every opportunity to give us our sign back after he admitted to stealing it. Unfortunately for him a cop was driving by and now he'll probably get a charge with that. And we hate to see theft. We hate to see that happen to somebody making a drunken mistake. But we also can't allow people to disrespect us." 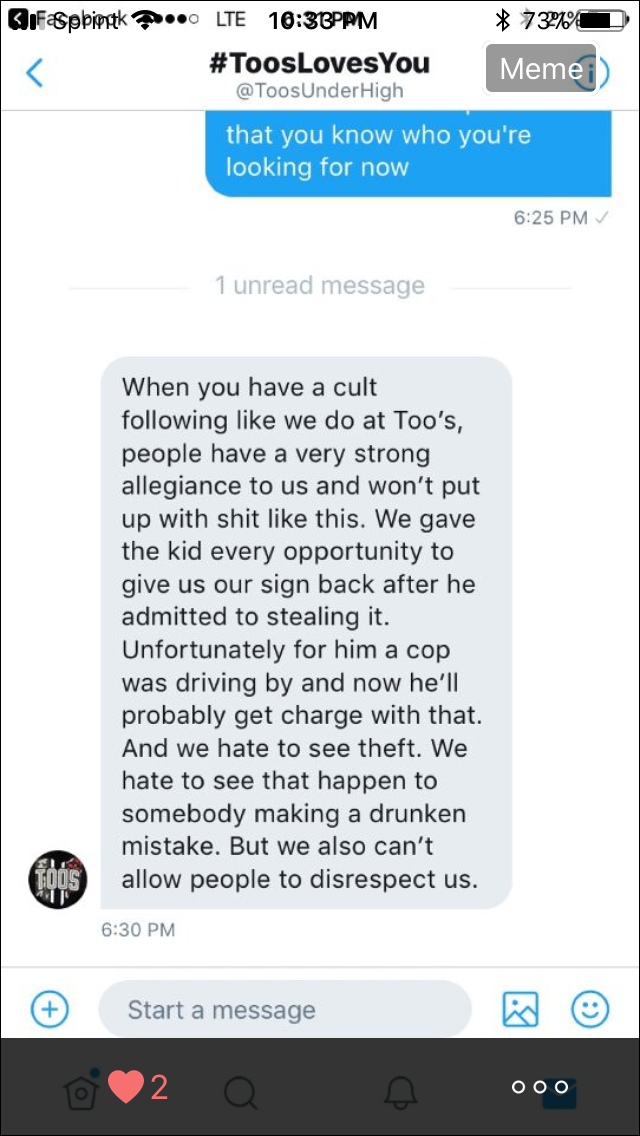 Too's now has their sign back – albeit broken – and is planning on going out with a bang this weekend!

Such a shame that someone would steal our sign only to break it and throw it in the dumpster. Pathetic. pic.twitter.com/yNW5JJhQjc