They won’t answer my messages and blocked me on Facebook

An OSU student has started a GoFundMe after ordering an Uber for two drunk strangers who repaid her by throwing up in the car.

Alyssa Wischmann, an Ohio State junior majoring in Social Work, was walking near campus with a friend when they came across two hammered sorority sisters who they decided to help home.

According to the summary on the GoFundMe page, aptly titled "Drunk Randos Who Barfed in the Uber", Alyssa and her friend Kimmy wanted to make sure the girls got home safe when the situation suddenly took a turn for the worse.

The story reads much like a WWE match or a scene from that one soap opera your mom watches:

"Last night I was walking on 4th with my dear friend Kimmy and we came across two very intoxicated women. We decided to walk them home to make sure they were OK. Drunk girl #1 proceeds to scream at more Drunk girl #2 and the two bicker and we had to de-escalate the situation (yay social work training)! Instead of walking home, Drunk girl #1 gets in her car and is about to start driving. I tell her that I am not letting her drive home because she is clearly inebriated and she proceeds to yell at me followed by me snatching her key.

"Drunk girl #2 gets out of the car and assaults me in the face and continues by dragging my hair to which my loyal friend Kimmy threw her off of me and hugged her until she calmed down. Drunk girl #1 realizes that I will not give her the keys back so she relaxes a bit. I ask her to order an Uber and she responds that she doesn't have the app and Drunk girl #2's phone is dead. Trying to be a better person than I have been lately, I decide I will Uber them home. I order the Uber, the two drunk girls get in the car, the end. Just kidding, I freaking wish.

"I get a call from Uber driver telling me I was about to have a $300 charge because Drunk girl #2 threw up in the Uber! Luckily, I find out that it was only a $150 charge along with the $14 Uber ride they took. So I literally don't even have $150 in my bank account right now, so if you support random acts of kindness, preventing drinking and driving situations, or my mental health and overall wellbeing, please consider donating $1 to this cause. If I get no money donated to me, I will probably revert to my old ways of being a snarky shittalker who doesn't do nice things because people suck. So please help me be optimistic ? and remember FRIENDS DON'T LET FRIENDS DRINK AND DRIVE OR BARF IN UBERS."

If all that wasn't crazy enough, both girls gave Alyssa fake names and addresses. When she eventually tracked down the two vomiting girls, she messaged them on Facebook and was ignored, then blocked. 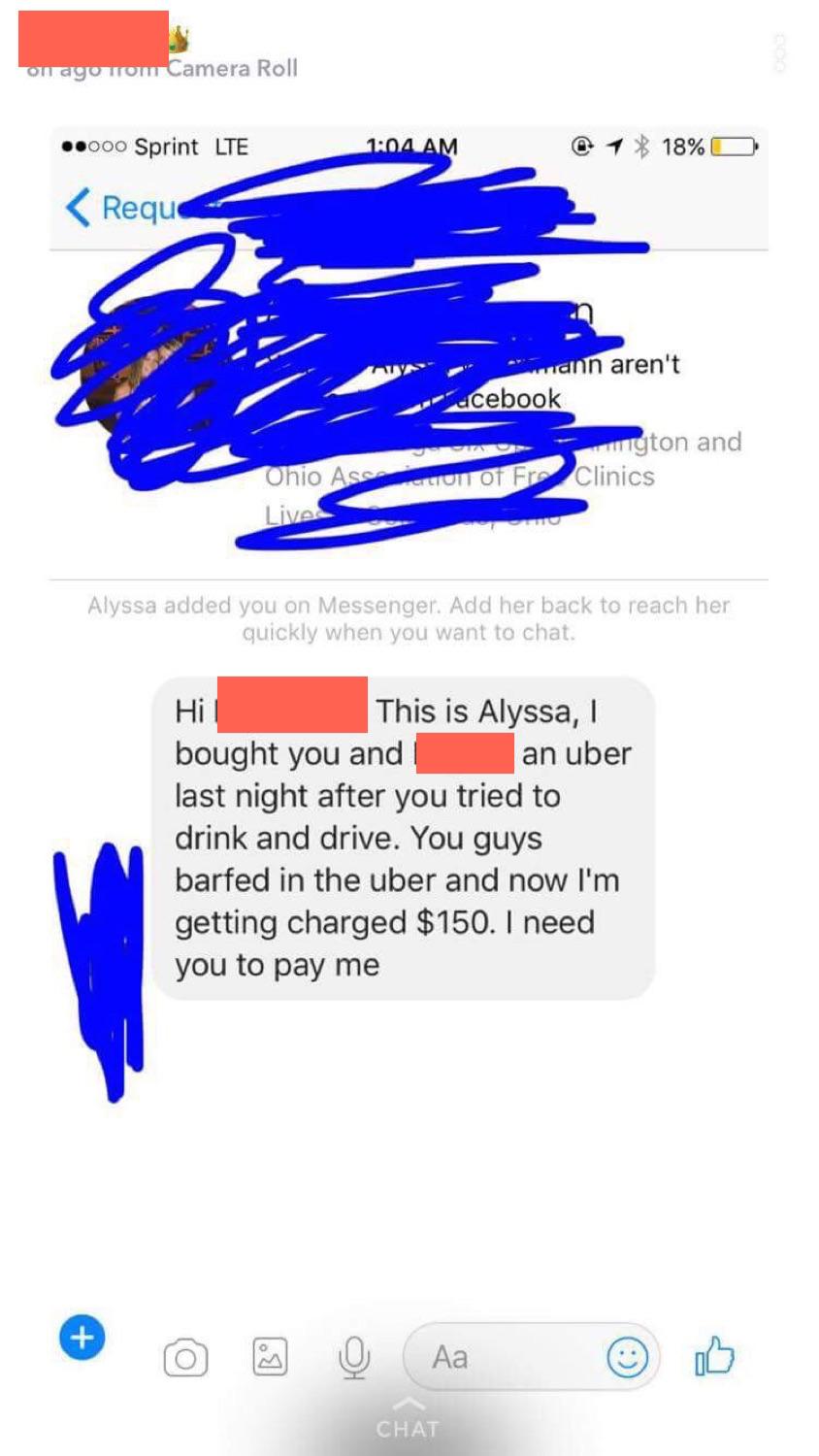 "It's honestly so messed up," Alyssa told The Tab. "I've also had random people reach out to me because the girl posted my note to her on Snapchat. I found out the girls' names and messaged them on Facebook and they both blocked me." 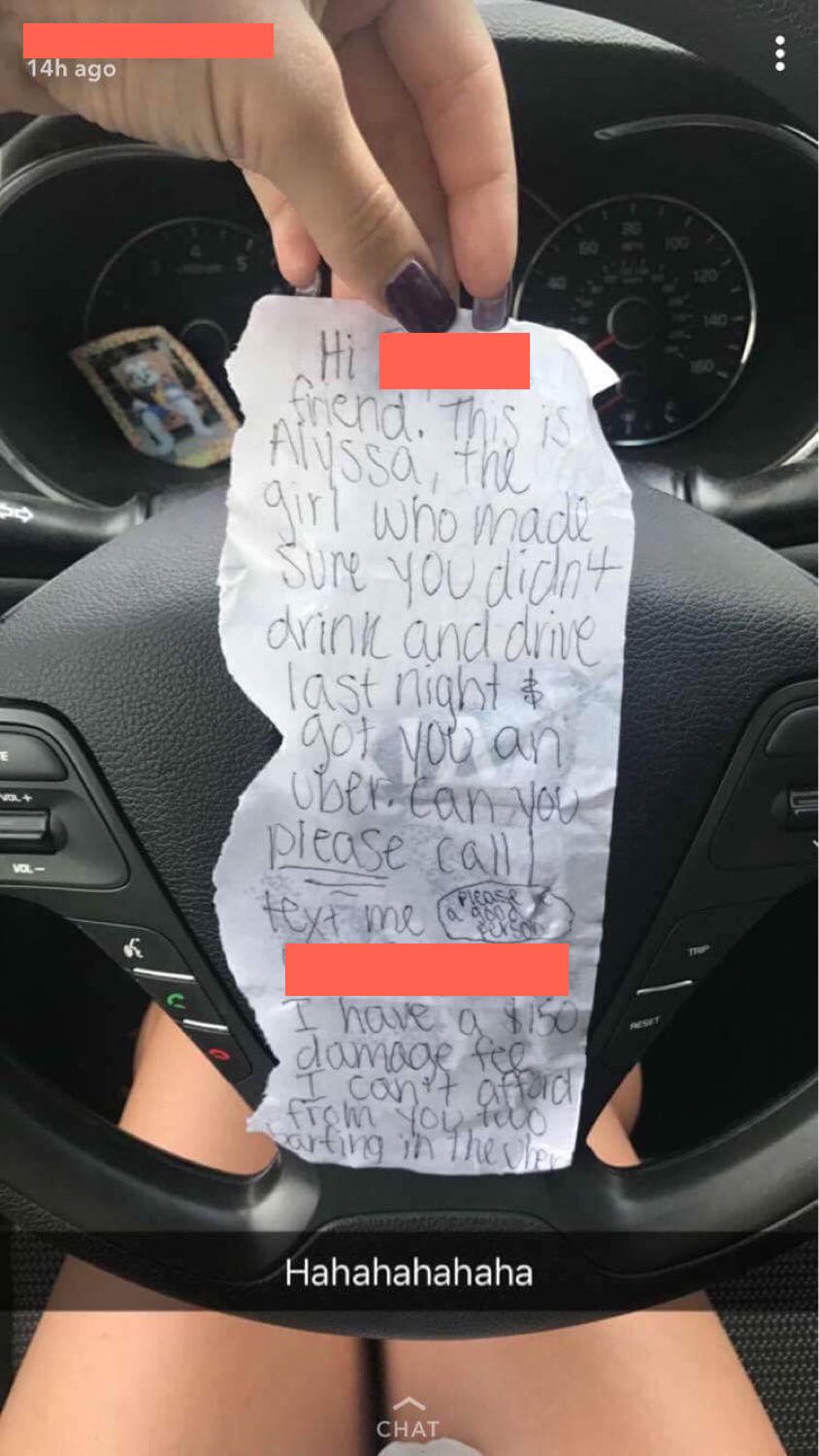 One of the students posted a Snapchat mocking Alyssa's note, which read: "I have a $150 damage fee I can't afford from you two barfing in the Uber."

Luckily for Alyssa, her fundraising goal of $135 has already been met.