Is this the lamest freshman ever? OSU student sends insane list of demands to new roommate

The new school year is right around the corner. For college freshmen, this offers a lot of exciting firsts: moving away from home, having independence like never before, and getting your roommate assignments.

Like many other students, Matthew, incoming freshman at the Ohio State University who goes by LupusOk on Reddit, was looking forward to move-in day until he received an email from his future roommate detailing a long list of unusual requests.

The email asked Matthew to avoid partying, to never have guests, avoid "sexual or mating rituals," and to not snore else he would "gently fix his physical position," among other requests. 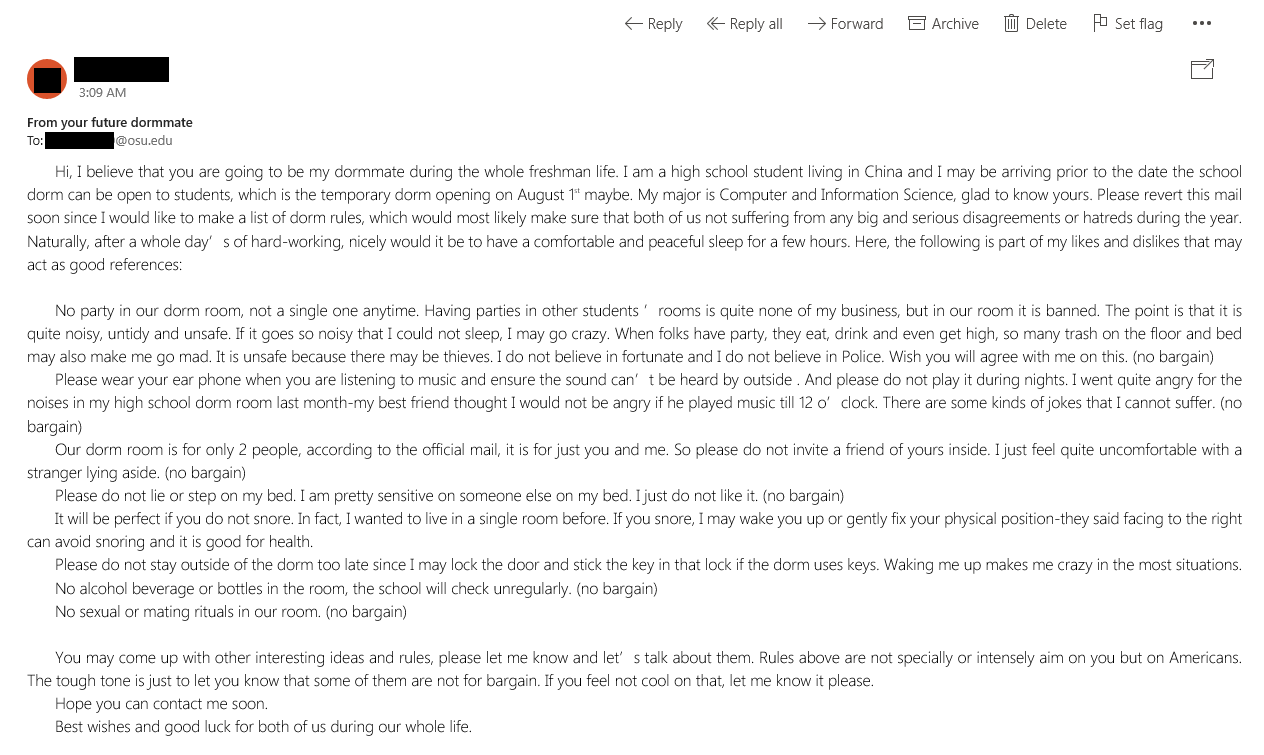 The email reads in full:

Hi, I believe that you are going to be my dormmate during the whole freshman life. I am a high school student living in China and I may be arriving prior to the date the school dorm can be open to students, which is the temporary dorm opening on August 1st maybe. My major is Computer and Information Science, glad to know yours. Please revert this mail soon since I would like to make a list of dorm rules, which would most likely make sure that both of us not suffering from any big and serious disagreements or hatreds during the year. Naturally, after a whole day's of hard-working, nicely would it be to have comfortable and peaceful sleep for a few hours. Here, the following is part of my likes and dislikes that may act as good references:

No party in our dorm room, not a single one anytime. Having parties in other students' rooms is quite non of my business, but in our room it is banned. The point is that it is quite noisy, untidy, and unsafe. It if goes so noisy that I could not sleep, I may go crazy. When folks have party, the way, drink, and even get high, so many trash on the floor and bed may also make me go mad. It is unsafe because there may be thieves. I do not believe in fortunate and I do not believe in police. Wish you will agree with me on this. (No bargain).

Please wear your ear phone when you are listening to music and ensure the sound can't be heard by outside. And please do not play it during nights. I went quite angry for the noises in my high school dorm room last month – my best friend thought I would not be angry if he played music until 12 o'clock. There are some kinds of jokes that I cannot suffer. (No bargain).

Our dorm room is for only 2 people, according to the official mail, it is for just you and me. So please do not invite a friend of yours inside. I just feel quite uncomfortable with a stranger lying aside. (No bargain).

It will be perfect if you do not snore, I may wake you up or gently fix your physical position – they said facing to the right can avoid snoring and it is good for health.

Please do not stay outside of the dorm too late since I may lock the door and stick the key in that lock if the dorm uses keys. Waking me up makes me crazy in the most situations.

No alcohol beverages or bottles in the room, the school will check unregularly. (No bargain).

No sexual or mating rituals in our room. (No bargain).

You may come up with other interesting ideas and rules, please let me know and let's talk about them. Rules above are not specially or intensely aim on you but on Americans. The tough tone is just to let you know that some of them are not for bargain. If you feel not cool on that, let me know it please.

Hope you can contact me soon. Best wishes and good luck for both of us during our whole life."

Initially Matthew was confused. "I had never had a roommate before and was completely unfamiliar with how that worked," he said.

He never responded to the e-mails and instead was sought advice from others on how to handle the situation before he said something he would later regret. "I don't think my old roommate even knows for sure that I got the e-mails," he said. "I actually had to show my sister the e-mail and ask if it was normal, or how much of it could have been just mistranslation."

Matthew asked Reddit users if he thought the outlined "rules" he had been e-mailed were enough to request a roommate change. Of the 99 comments the post received, many former RAs posted to offer advice and assistance. 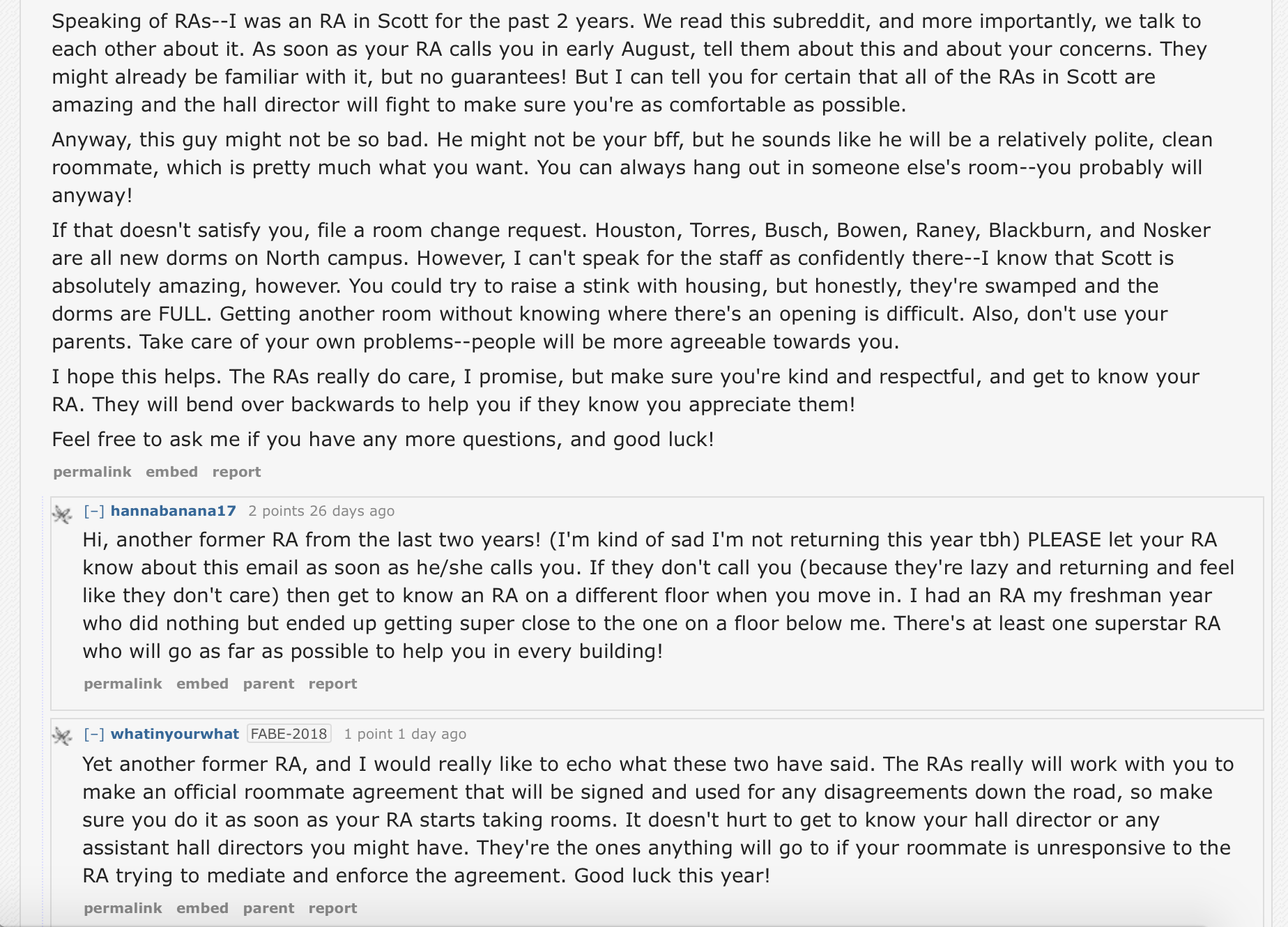 One of the best things to come out of the email, however, is the 'no bargain' meme.

"It feels really cool to see how much fun people are having with the e-mail, I'm glad something good could come out of it," said Matthew.

After he received the email, Matthew contacted housing. At the time they said they were unable to make any changes. Since then, however, he has received a second e-mail from his potential roommate that said there was a single room available and that they had been switched — Matthew has a new roommate.