We decided to go to the most reputable site on the Internet, Urban Dictionary, to figure out exactly how people feel about Ohio State, and to finally define what it means to be a Buckeye.

Here are some of the most savage things people had to say about Ohio State: 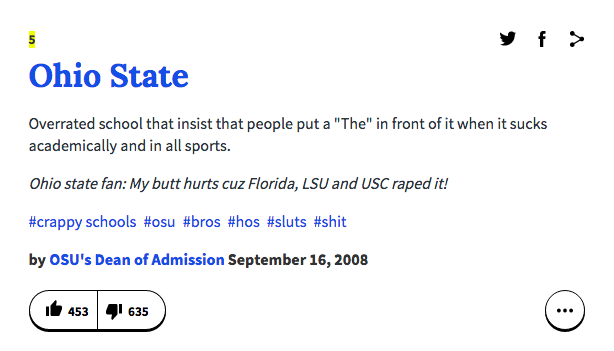 I have to admit, this one hurts, especially coming from Ohio State’s Dean of Admissions. You would think that someone in that position would know that the reason we insist on being called ‘THE’ Ohio State University is because it’s officially part of our school’s name and has been since 1878. 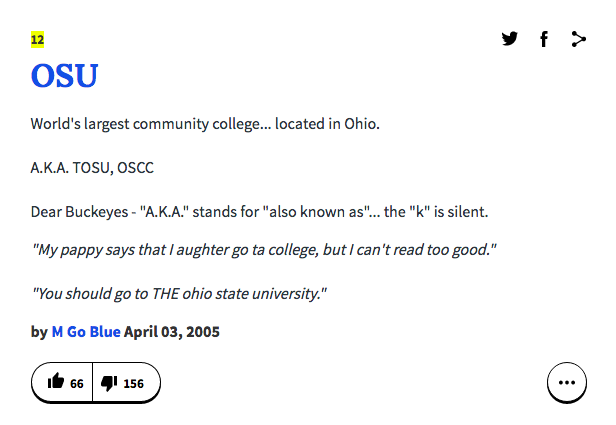 Alright, Mr. M Go Blue. According to you we might not be a particularly intelligent bunch, but I know bias when I see it. Maybe next time you look to validate yourself on the internet, you’ll come up with a less incriminating username. 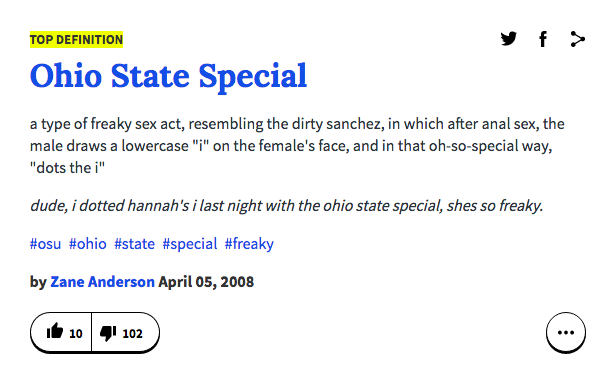 Zane Anderson, you dirty (sanchez) dog, you. Listen, I’m not here to kink-shame — instead I want to celebrate your bold creativity when it comes to doing the deed in bedroom, or I guess in this case, the bathroom. As for naming it after Ohio State? Well, I couldn’t be more flattered, and maybe a little concerned. 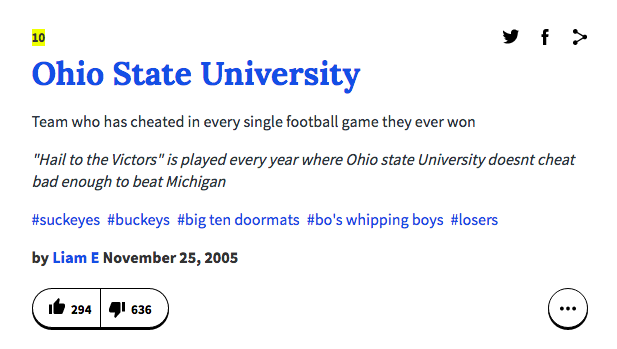 I wasn’t aware that Tom Brady played for Ohio State. 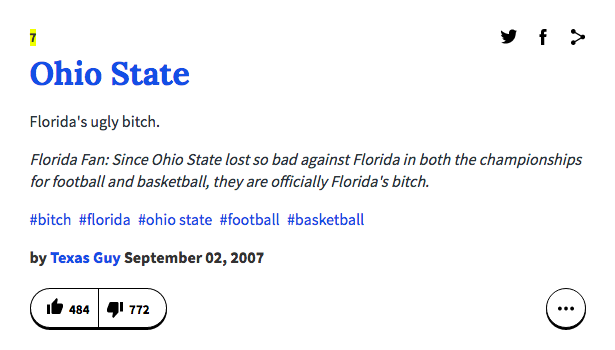 Check your allegiance, Texas Guy. I’m not going to get upset about a post written by a guy who probably didn’t go to either of the schools he’s mentioned. How’s the football team down in Texas? I wouldn’t know because I haven’t had a reason to look very far down the NCAA rankings in recent years. 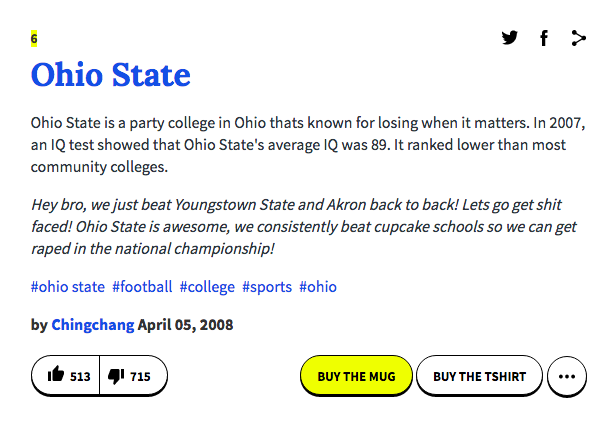 I can’t find a study anywhere that supports your claim that in 2007 “Ohio State’s average IQ was 89,” but I can find a study that says the average ACT score of an Ohio State student currently falls somewhere between 27 and 31. That said, you were right on one thing — we definitely know how to party.

‘A university that barely qualifies as higher education, obsessing over a football team that routinely gets embarrassed in early January’ 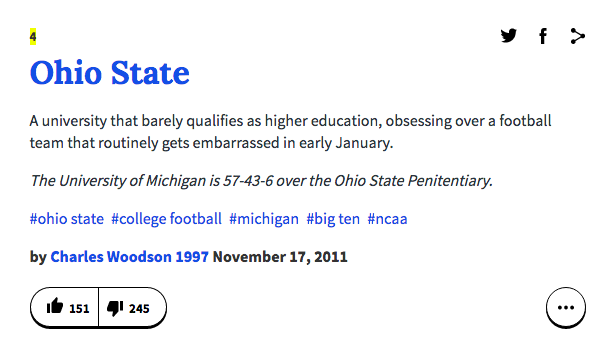 While it’s true that The University of Michigan currently holds the most winning record in the Ohio State/Michigan rivalry, I would argue that the only thing more embarrassing than losing a College Football Playoff National Championship is never winning one at all. 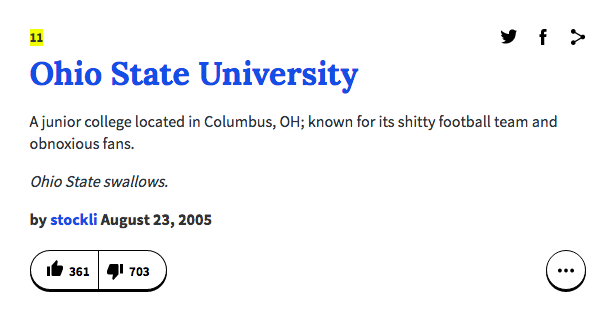 I’m sorry, but since when has swallowing been a bad thing?

‘One of the most arrogant universities in the world’ 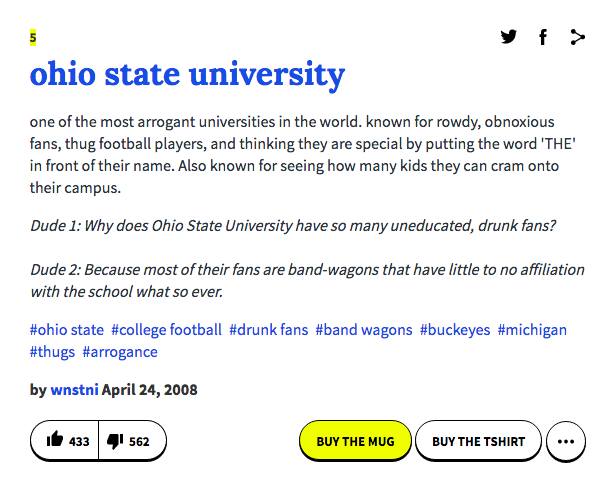 Bold move to call Ohio State fans uneducated in a post riddled with grammatical errors. I won’t fight you on having a surplus of bandwagon fans, but who could blame them? Ohio State is fantastic, the absolute best. We are THE Ohio State University, and we may just be the best university in the entire world. O-H! I-Ohhhh shit, is this what you meant by arrogant and obnoxious? 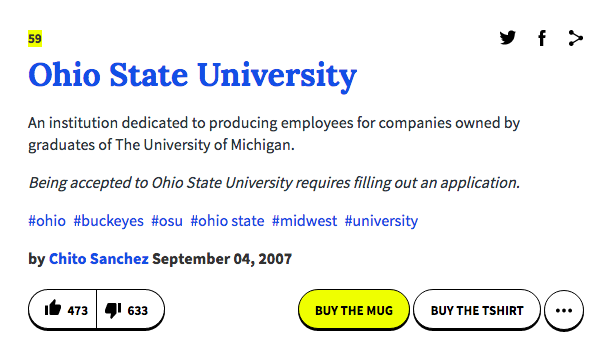 Hold the phone, are you telling me that you can get accepted into other universities without filling out an application? Well that’s just ridiculous, someone should look into that. 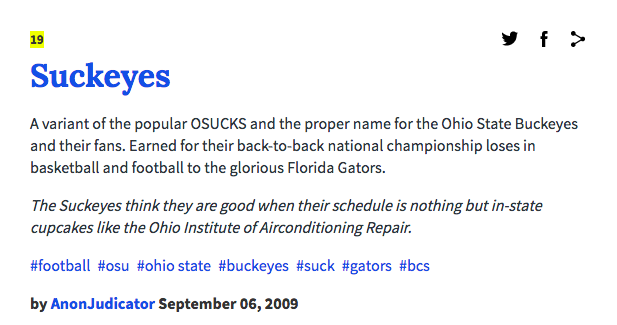 I don’t know about you, but my favorite kind of judge is one who hides behind anonymity so they don’t have to take responsibility for their shitty rulings. And rag on it all you want, but the Ohio Institute of Airconditioning has the best fans.

‘The best damn state school in the nation’

Tell me something I don’t know.