Time to end this debate once and for all

A rumor has been circulating around for years, telling students that if they were to be hit by a bus, Ohio State would be forced to pay their tuition for the rest of their time at the University as compensation for injuries sustained during the accident.

Just found out at OSU if you get hit by a bus you get free tuition. I will send you all my hospital room number ?

But before you go and jump in front of a bus there’s something you should know: Ohio State has not and will not cover your tuition if you get hit by a CABS bus.

Dan Hedman, the Director of Marketing and Communications at Ohio State, reluctantly debunked the rumor to The Tab Ohio State nearly a month after we first tried to get in touch.

32 days, six emails and a handful of phone calls later to Ohio State’s Transportation and Traffic Management team, The Ohio State University has officially confirmed this rumor to be untrue.

In a rather concise and pointed email, Hedman simply stated, “This is a myth.” 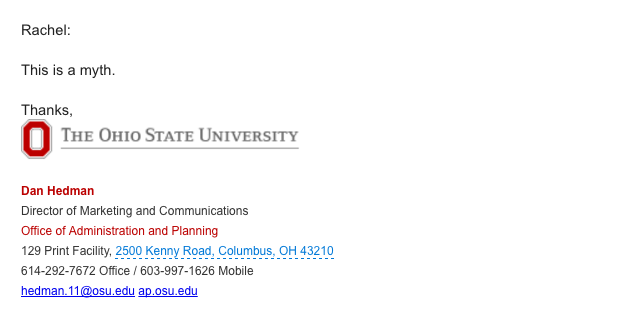 There you have it, The Ohio State University has no interest in or legal obligation to refund your money because of a CABS accident.

If you were trying to find a clever way out of your student loans by way of traffic accident, I suggest you reconsider. Unfortunately, there’s no easy way out of paying your tuition, not that getting hit by a bus would be easy, but it would be quick and dirty.