Last Saturday night, after an exciting Buckeye win against Nebraska, Jen Michaud, an Ohio State junior, went to Raising Cane’s to celebrate and grab a bite of Cane’s chicken to eat with her roommate.

After ordering and eating most of her meal, she eventually realized that one of her Cane’s chicken tenders was not like the others: it appeared to contain what has yet to be identified as either a claw or a beak. 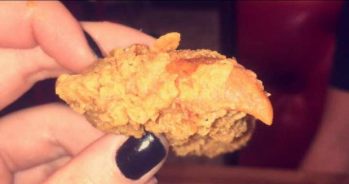 “It was totally disturbing,” said Michaud, “we went there after game day and it was my last chicken tender. I was about to take a bite when I saw whatever that was.” In the pictures she took and posted to Snapchat, the image clearly shows some sort of sharp object that could be identified as either a talon or the beak of a chicken.

“I showed it to my roommate, Ricky, and we both threw out the rest of our meal and took all of those pictures.” Michaud told The Tab that she had only planned to post the images to her Snapchat story because she thought it was funny.

It wasn’t until her friends recommended sharing the photo on Facebook that she ended up posting it on the official Cane’s page. It wasn’t long before Cane’s reached out to Michaud asking for her contact information, the location of the Cane’s restaurant, and the time she purchased her meal. 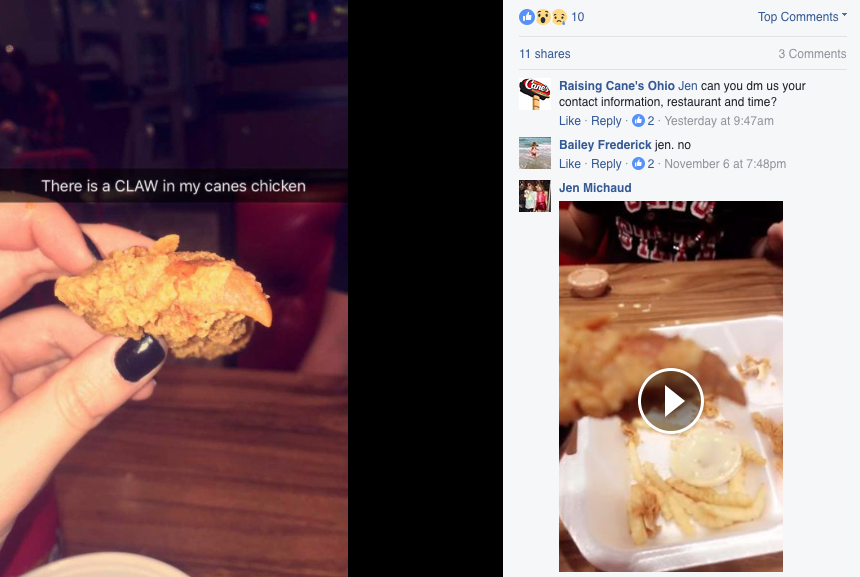 A Cane’s representative later contacted Jen Michaud and suggested that what appeared to be a ‘claw’ might simply be extra breading. According to the representative, the company does not use meat that comes from near the head or feet of the chicken, making it highly unlikely for the protruding object to be a claw or beak.

For good measure, Raising Cane’s will be sending Michaud something in the mail to compensate for her troubling chicken experience.

Overall, Michaud has had a pretty amicable reaction to the entire Cane’s chicken situation. She laughed about it and joked that she “definitely could have found something much more disturbing, like a foreign object.”

The Tab reached out to the Raising Cane’s on High Street for a comment, but they chose not to respond.