Kyle Snyder walks into the Starbucks like he might have just walked into a gym. He’s dressed casually and looks relaxed, like he had done this every day for the last few years of his life. Interviews have become a regular occurrence for Snyder. Turns out, everyone wants to talk to you when you’re an Olympic gold medalist. 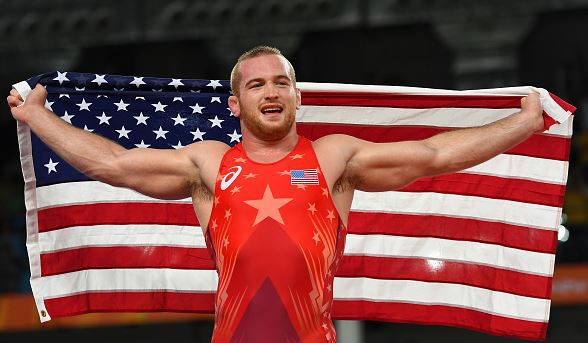 He apologizes for being late, all smiles and handshakes, before excusing himself to look for someone who might lend him a phone charger. As he goes table-to-table, unsuspecting coffee drinkers easily recognize Snyder. He graciously takes a moment to speak with each person and take a picture with each table before finally returning to mine, phone charger in hand.

From Rio to adjusting back to school and Columbus, Snyder gave me some insight on his life after winning gold.

Do you get that a lot now (getting recognized)?

Yeah, I get that a decent amount. It’s not weird though….I like it, it’s cool.

Yea, a little bit, for right now at least (laughs).

How has it been being home?

It was pretty stressful at first; well, not stressful but hectic. No relaxing. I came off the airplane and then went straight from the airport to do interviews, and I’ve pretty much been doing interviews since. They’ve been good and really fun, but it’s nice being back in Columbus, seeing my friends and stuff.

How does winning in Rio compare to all of your other victories?

Winning the Olympics is probably the biggest, and the one that means the most to me, just because the Olympic games is kind of the pinnacle of the sport so it’s something that I’ve wanted to compete in for a long time. It’s always been the goal. I mean, everyone wants to win, but I just want to wrestle my best and represent my country well.

What was it like being the youngest member on the team?

I felt comfortable. Last year, I wrestled in the world championships and I won that, so even though I was young, I was one of the guys who had been on a team before and had success. And all the teammates, I knew them all very well, so I always felt comfortable with them.

What’s going through your head when you’re competing?

When I’m competing, I’m thinking about the wrestling itself, the positions and effort. I’m trying to get the most out of myself when I’m competing. I try to let my love for the sport to drive me to be the best that I can be.

How were the living quarters in Rio? Were they as bad as everyone made them out to be?

No, they weren’t bad at all. I thought they were pretty good, but I only lived in the village for five days and then we moved to basically a YMCA that the USOC bought. They provided us with our own beds and chefs from America, and it was really nice.

Did you use Tinder in Rio?

No, I did not use Tinder in Rio. But I know there was a lot of Tinder-ing going on. Definitely a lot of Tinder. Rumor confirmed. But I didn’t use it.

What was it like being at the Olympics with so many amazing athletes?

It was just fun, really. I was just trying to enjoy the moments. Everyday you would meet somebody cool, and you might not ever meet one of the superstars, but just an Olympian and you’d get to hear their story. It was all really interesting because everyone comes from different areas, but we’re all Olympians and we all worked hard to get there.

What is your secret to success?

I think two things. One, I really love what I’m doing and that motivates and inspires me everyday. I love working out and wrestling, and I love competing. Two is my value system. Instead of valuing winning, instead of valuing my accolades and my gold medals, I value my effort and the things that I can control. It allows me to get a lot more out of myself.

What was it like when you realized you had won the gold?

I don’t know the first thing I thought, I know I dropped to my knees and looked down for a second, and when I looked up, my coach was just standing with his arms open. I was like, “I gotta go give him a hug.”

What did you miss most about OSU?

The people. I missed the people that I get to see everyday when I’m here, and I missed my bed.

What’s your favorite place to hang out on campus?

Guy’s apartments, both on and off campus. And then I spend a lot of time in the wrestling room, just cause that’s what I do.

What’s your favorite food at OSU?

Midway or The O? 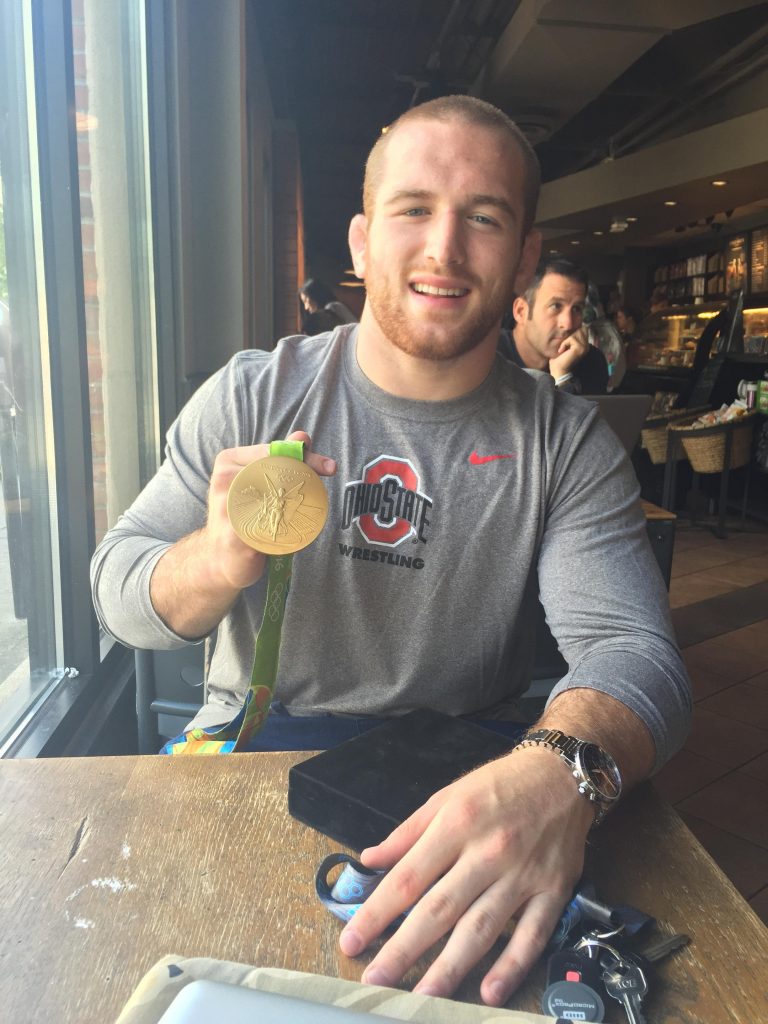 As the interview winds down, Snyder offers to show me his gold medal, and even lets me hold it. For those of you who are wondering, it’s way heavier than you might expect. He mentions that he’s off to another interview and in a hurry. He returns the phone charger and makes a final lap around the coffee shop, speaking at length with a father who insists his son would never believe he actually got to meet the Kyle Snyder.