The almost on the eleventh floor: My experience with sexual assault

How I nearly became the one in four

In the early morning hours of February 17, 2013, I left my dorm in Park-Stradley at The Ohio State University to go on a drive with my best friend – a young woman I met during my time as a student at Capital University. These sorts of drives were not uncharacteristic for us. We were just two freshmen still learning how to navigate the psychological tumult that often accompanies being a young person in college. We would drive for hours, crawling past the campus haunts that at the time were still foreign to us.

I can remember observing the throngs of club goers and bar flies in their winter parkas spilling out onto the sidewalks upon closing time. Couples clutched at one another as they began their walk home. Friends leaned on one another’s incapacitated limbs. And homeless men shook their plastic cups at college kids with credit cards. Sometimes we noticed someone that we knew, or used to know. Other times we took pity on the poor souls too drunk to hold their heads up, and the girls who stared at their suitors with starry eyes, too naive to the fact that her following week would probably be plagued with questions as to why he didn’t call. But almost every time, we were painfully aware of the girl that had had too much and walked home without a pair of limbs to guide her. That will never be me.

It was nearly four in the morning when my friend and I had finally decided that it was time to go home. I can remember waving goodbye to her as I walked through the secured glass doors. Being that there was a full-time desk staff as ever-present as the florescent glow of the overhead lights, I cannot say I felt at all unsettled as I entered the building. I often wonder if some subconscious subdivision of my brain knew this evening would be the last time I would ever feel this way. However, one can never quite prepare themselves for such a monumental shift. 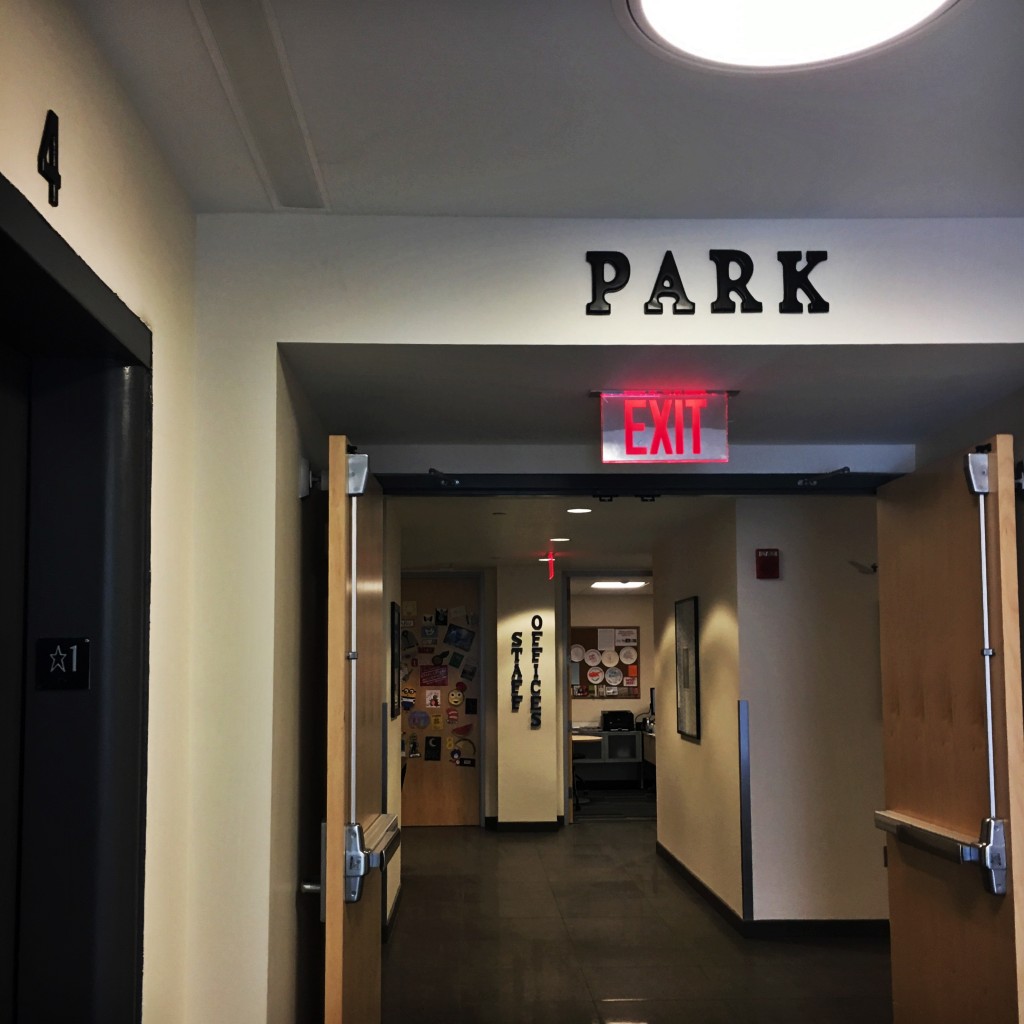 Of course, I was not entirely naive to the fact bad things happened behind those doors. After Park-Stradley Hall had been renovated and reopened that year, student housing representatives for the university announced the bathrooms on each floor would be considered co-ed until further notice. It was a decision which left parents and female students alike, disconcerted.

The first week of my time in the dormitory, I was brushing my teeth next to a strange boy wearing nothing but a towel. I was uncomfortable, as I believe anyone would have been. But I also vehemently believed I would never become one of those girls you hear stories about. I was not a victim. I decided I would treat the shared bathrooms as simply another one of life’s cruel realities we endure because we have no other choice. I showered at times I knew many students on the floor had class, and there was many a morning I woke with a sore bladder because I refused to use the bathroom in the middle of the night.

That night in February I rode the elevator up to the eleventh floor as I would have at the conclusion of any other day. Before the doors even opened however, I could hear the irrefutable sounds of a whole host of intoxicated young men with nothing to do. I knew almost instantaneously my choice to leave that elevator would be synonymous with putting myself in a potentially perilous position, but the pinging of the doors had already announced my arrival. I decided I would hang my head to the floor, walk as fast as I could to my room at the end of the hall and hope I might remain invisible or at the very least, uninteresting.

“There she is,” crowed one of the boys. “My favorite!” exclaimed another. I tossed them all a careless wave over my shoulder in an effort to avoid rudeness. There must have been at least five of them in various states of drunken disarray at the end of the hall. I can still recall how violently my hands began to tremble as I searched the pockets of my leather jacket for my keycard. I had almost reached my door before one of the boys had matched my pace. We had spoken a handful of times, each interaction proving he possessed some sort of superficial fascination with me. He was pleasant, I suppose. But he was also 6’2 and had at least fifty pounds on me. 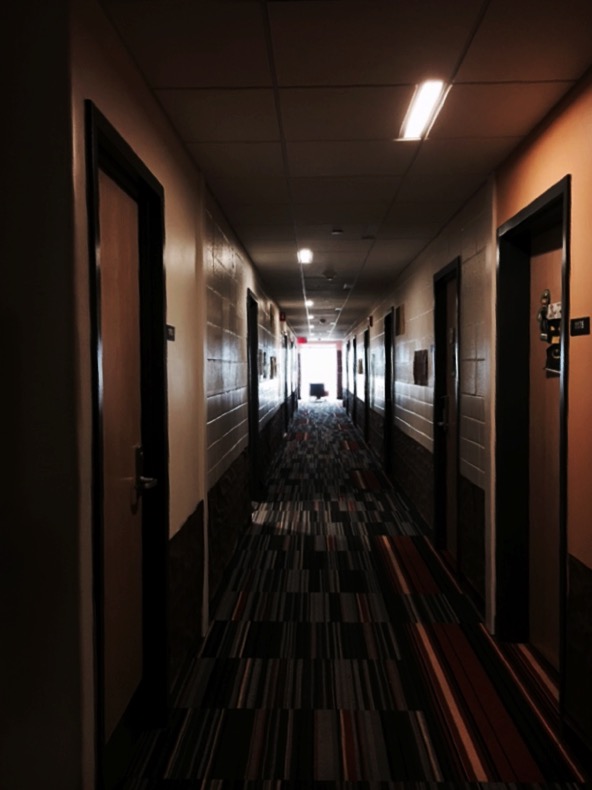 “What have you been doing tonight? It’s late,” he probed.

“Just with a friend,” I answered curtly as I slid my keycard into my door’s handle. To my consternation, he had draped his debauched frame across the span of the threshold, his fingers gripping each side of the doorframe until his knuckles strained white. Leaning his face but an inch from my own, the smell of cheap whiskey fanned from his slackened mouth like a toxin.

I put a considerable amount of distance between us, placing my hands on both of my hips in an effort to veil my blind panic.

“None of your business,” I spat at him. One side of his mouth drew up as if controlled by an unseeable marionette string.

“You know, Hannah isn’t here,” he taunted, his frame separating me from my room, my safety, and a happy ending one in four women never get.

Hannah, my roommate, had gone home for the weekend—a fact I had forgotten and was now painfully aware of. If it had not occurred to me before that moment, I knew then I was prey caught in the crosshairs of a predator. My next move had to be calculated, and even then I knew I was not guaranteed I would escape unscathed.

“Get out of my way, please,” I politely began. His grin only grew.

“I said, get the fuck out of my way,” my voice raised just an octave higher. I prayed my mounting anxiety would remain undetected. His grip tightened on the door frame as his over boozed-body swayed back and forth. Back and forth. Back and forth. His exceptional intoxication was my only hope. I decided if I could push him out of the way using all of my strength, I would be able to make a run for it into my room, before slamming the door on an unimaginable fate.

I leaned closer in warning, willing myself not to communicate even an ounce of duress: “Get the fuck out of my way,” I barked again, shoving his body out of the way and into a pathetic heap upon the patterned carpet. I worked quickly, closing the door and turning both locks while peering through the peephole.

“Fucking bitch,” I heard him mutter before resting his head in finality upon the floor. He was still lying there as I leaned my back against the synthetic pine door, and collapsed into the kind of sobs that make no noise at all, yet leave their victim panting for oxygen. I laid there on the floor, much like my perpetrator, until I could find my footing, climb the steel ladder to my bunk, and settle into the fetal position amongst the cotton sheets.

I thought of my own foolish illations that campus sexual assault was limited to the drunk girl stumbling home from the bar alone. I thought of how unfair it is that society conditions young women to maintain awareness at all times, to hold their keys between their knuckles, and to never accept a drink from a stranger, when appropriate expectations are not placed on young men. I thought about modern media’s tendency to fill one’s mind with half-baked anecdotes in an attempt to educate, when in reality their presentation of information could not be any more detrimental, and is only further evidence of a prescription to pervasive rape culture. I thought about how close I had come to being the victim I once believed I would never become.

But most of all, I thought about how badly I needed to pee. 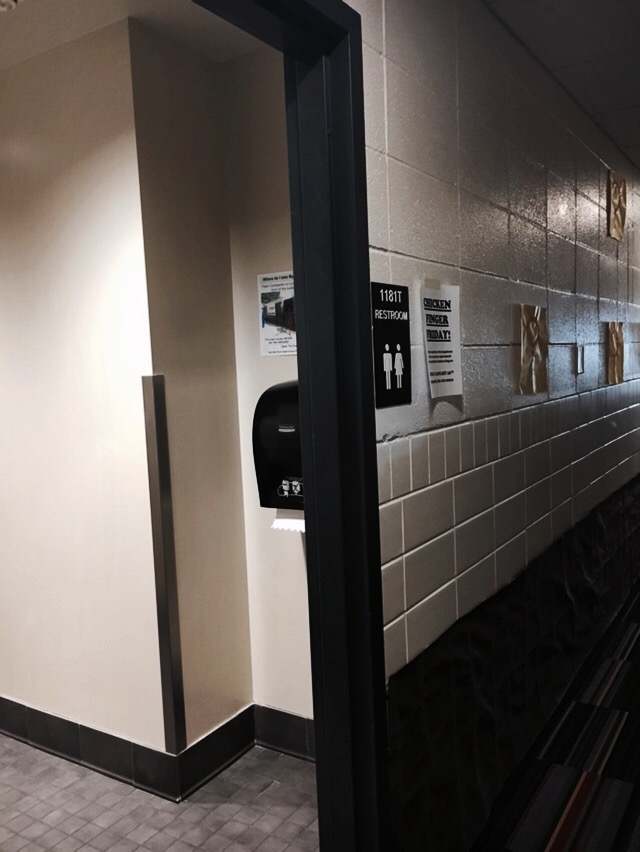