‘In 2018, there is no excuse for intentional and deliberate disrespect’

In a failed attempt to celebrate Black History Month, NYU dining hosted a "themed" dinner that was met with extreme backlash. The menu in question consisted of "ribs, collard greens, cornbread, smashed yams and macaroni and cheese" with "Red Kool-Aid and watermelon flavored water."

Many students were alerted to Downstein dining hall's menu through a Twitter post by NYU student Kayla Eubanks:

Are y’all serious? Y’all really thought it was okay to have watermelon water for the Black History Month Meal? I’m not as annoyed by the koolaid but this watermelon water was very intentional and coonish. Do better. @nyuniversity @NYUDining pic.twitter.com/Fc165gWRtP

Appalled and furious by this act of complete ignorance on behalf of the University, NYU CAS sophomore Nia Harris emailed NYU dining and University deans to confront this choice to stereotype black culture. Here is an extract from this email:

Obviously the negative racial connotations and history of Koolaid and watermelon is why I took it upon myself to write today. Not only was this racially insensitive, this was just ignorant. In 2018, there is no excuse for intentional and deliberate disrespect…If you would like to learn how to celebrate Black history and culture during this month, you can ask black students instead of patronizing us with Koolaid, watermelon, and ribs."

The Tab reached out to Nia Harris to ask what she thought she could have been done to prevent this from happening and her thoughts on the apology issued by President Hamilton concerning the event. 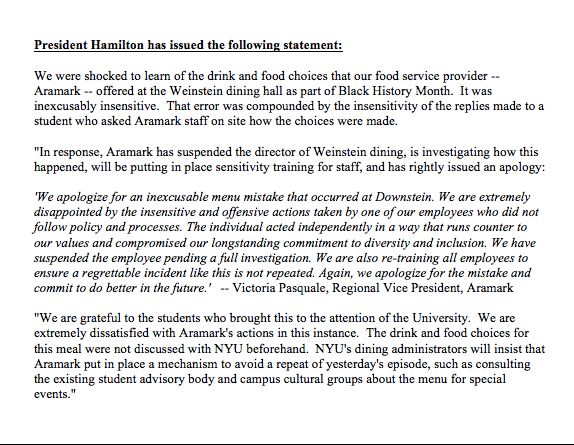 "I thought the apology came in a timely manner and we now know that our President stands with us," Nia said.

Y’all need to cut the act! This fraudulent university definitely reinforces racial hierarchies. I’m glad y’all can tweet but have yet to address the WATERMELON WATER FOR BLACK HISTORY MONTH!!’ https://t.co/JdhLopa7HX

Black students at NYU matter, Nia said, and it's important that President Hamilton affirmed that.

"Now that I've been in fuller meetings and have a fuller picture of what happen I genuinely think this all could have been prevented by sensitivity training, a more diverse management team, and just thinking overall because this was a careless mistake," Nia said.

Aramark – the company that organizes and provides the dining services at NYU – has fired the two employees responsible for this decision. The company claimed that these employees violated the standard of consulting existing student advisory boards and cultural groups before planning a menu such as this.