Sophie Sandberg is the woman behind ‘Catcalls of NYC’

If you're a woman living in New York or any major city —or in reality, anywhere in the world— you've most likely experienced street harassment. It could be catcalling, a stranger grabbing your derriere without permission or even when that self-proclaimed 'nice guy' followed you home because 'he just wanted to get to know you'.

NYU Junior Sophie Sandberg understands this reality for women and wants to highlight it. With her project "Catcalls of NYC", Sandberg uses the vulgar catcalls women have heard and turns them into art by chalking the phrases in vibrant colors on the street where the verbal harassment took place.

Sandberg posts pictures of the finished product on her Instagram account, @catcallsofnyc, which boasts over 26,000 followers. "DM me your experiences of harassment and location in NYC area and I will share," the artist wrote in her bio.

"A few weeks ago a man told me that 'you’re way too sexy to be walking alone' I don’t even want to know what he would have done to me if it was nighttime." – @soph98_

The Tab spoke with Sandberg to learn more about her passion project to #stopstreetharassment.

Was this just something you decided to do on your own free time or was this a project for a class?

It was inspired by a class project for my freshman year writing class. We were assigned to create a project and immerse ourselves in something and use social media to document it. So I'd always been interested in catcalling —or disturbed by it—so I decided to immerse myself in it.

At first, I thought I was going to take pictures of men catcalling women, but then that seemed a little dangerous and scary. So I decided I could use the words that were said and record them in the spot they were said and I thought that was simple and powerful.

So it started off just what was being said to you and then you expanded it?

I had a lot of material from growing up in New York so I used that to start off. Then my friends knew about it and would tell me their experiences. But I would say for the past year or so I've just been using what strangers message me.

Yelling "China" to Asian women is racist and is never okay. #stopstreetharassment "As an American-born woman of Chinese ethnicity, I've had to endure this label endlessly. There is a privilege to walking the streets with anonymity; with being able to actively claim your identity rather than have it thrust upon you. Over time, the comments that single you out for where you seem to be "really from" wear at your sense of belonging in this country. Then there are the times when it gets worse; in Niacaragua, I once had to walk through a gauntlet of men sitting on the sidewalk grabbing at my arms. "China, China, China," they said. This is when what's seemingly harmless becomes immediately physically threatening." – @jesssicaguo

Yes, I distinctly remember being twelve and someone whispering from a car and not realizing I was being cat-called. Looking back, I'm able to realize it.

But the first time I was aware of it was when I was 15-years-old. I had a job for the first time downtown and I got dressed up and that kind of made me a target for it. And I felt like there was something different about me that was realizing it.

"When I was 15 years old, walking down a street with a couple of friends, we passed this small group men who were at least twice our age. One of them motioned his hand towards me and said: 'Wow…beautiful. Call me in 3 years!' He said more after that, but I felt immediately violated, and helpless. He was aware that I was a child, a teenager, had no regard for my peace of mind and decided that everyone around us needed to know that I was an object of his desire. I remember feeling afraid, and ashamed of myself from my first cat call." – @akehau #stopstreetharassment

So this started as a school project which you continued after it was graded. What compelled you to keep it going?

A big part of it was having people say that it was a really good idea and I think if my friends weren't so supportive I probably wouldn't have kept doing it. It was also really motivating when people started to message me and thank me for doing it.

So if you're a junior now, you've been doing this for two years?

It's interesting because in this moment, it feels like a very apropos thing to be doing. But at the same time, all of this has been happening for years and years. Have you found recently a greater interest in the project?

I think that part of why it's blowing up right now is because people are really interested in the stories that have been silenced for some many years, and that's the reason I started it two years ago. It's always been something that has affected my friends and me and people who have dealt with harassment. But now people are realizing that there have been so many stories that've been silenced for so long and are interested in them.

It's good to talk about it…I didn't talk about cat-calling with my friends when I was 15 that much. And I think continuing the conversation is what makes room for change and drawing attention to it in a bigger way.

What do you think about the environment on NYU's campus? Can you walk into any space at NYU and feel comfortable? Because we're in the middle of the city…you know I've been harassed in Washington Square Park numerous times. Do you think that NYU could be doing anything to combat that behavior?

"A guy was standing next to his bike and when I walked by he said 'can I suck your pussy?' I ignored him and speedily walked away. He apparently then got on his bike and few seconds later after I crossed broadway I soon had him riding next to me on his bike aggressively asking again and again 'can I suck your pussy?' I crossed the street and thought I finally got rid of him but soon saw him riding by me again, this time not saying anything. I moved closer to a group of people walking in front of me and made it to my dorm." – @laurengrajewski

What I think we need is better bystanders for people to step in. By starting a conversation about it, NYU could prompt that sort of behavior. I mean, I've definitely been harassed in the park and I have done some many people's catcalls in the park which is ironic because it's our campus.

The project must take you all over the city if you chalk where people experienced catcalls then, right?

Yes, it takes me all over. I am a full-time student so I tend to do the ones around campus sooner than the ones that send me to Brooklyn. It's unfortunate because it's not like they're less important, it's just harder to get there. 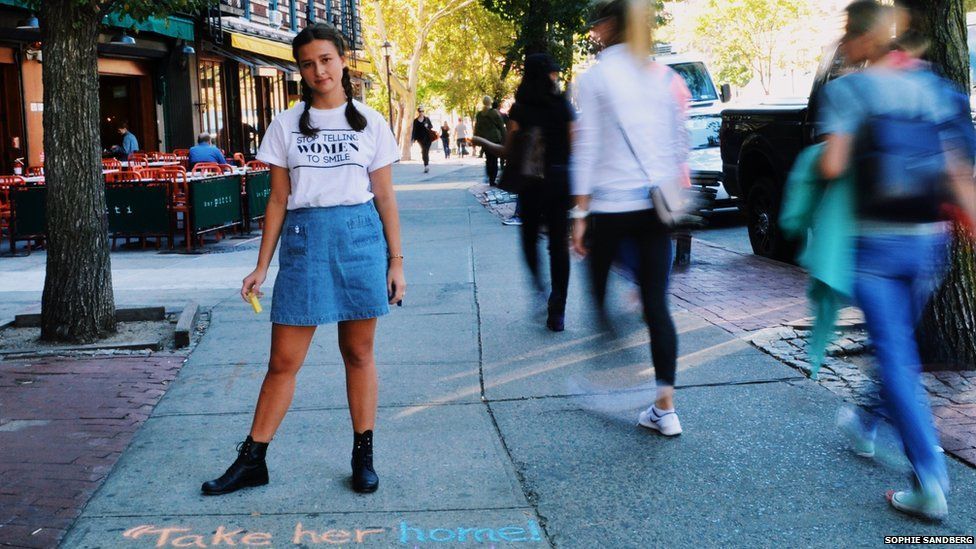 Do you want to expand the project or recruiting people to join a team?

Well right now actually there are lots of people approaching me who want to do 'Catcalls of' wherever they live, like "Catcalls of Texas." I would definitely be interested in doing because that could be a huge movement. But yes, I could use more hands in New York.