On Wednesday, Identity Evropa propaganda and recruitment fliers were discovered on a Kimmel bulletin board. NYU Against Fascism and NYU Disorient quickly called for tips via Facebook and reached out to 15 campus organizations to co-host an emergency rally in Washington Square Park the next day, gathering over 100 people.

Identity Evropa, a white supremacist organization classified as a hate group by the Anti-Defamation League and the Southern Poverty Law Center, was heavily involved in the Charlottesville neo-Nazi violences last August. Since earlier this month, the fliers have been sprouting up on college campuses across the country.

White supremacist group Identity Evropa is putting up recruitment posters at NYU. No fascists at NYU! If you find out…

“We are here to tell white supremacists that they are not welcome,” said Nikki Camera of NYU’s International Socialists Organization (ISO). "We are strong and we will not go away," added the NYU College Democrats President, Fadumo Osman.

For Ben Zinevich of NYU’s Democratic Socialists of America (DSA), the current administration actively emboldens white nationalists, including through the president’s hesitancy to denounce their actions and crimes as driven by hate. “We have a president that sees me as just as much of a threat to national security as these people, who if given the chance would murder other citizens,” Zinevich said. 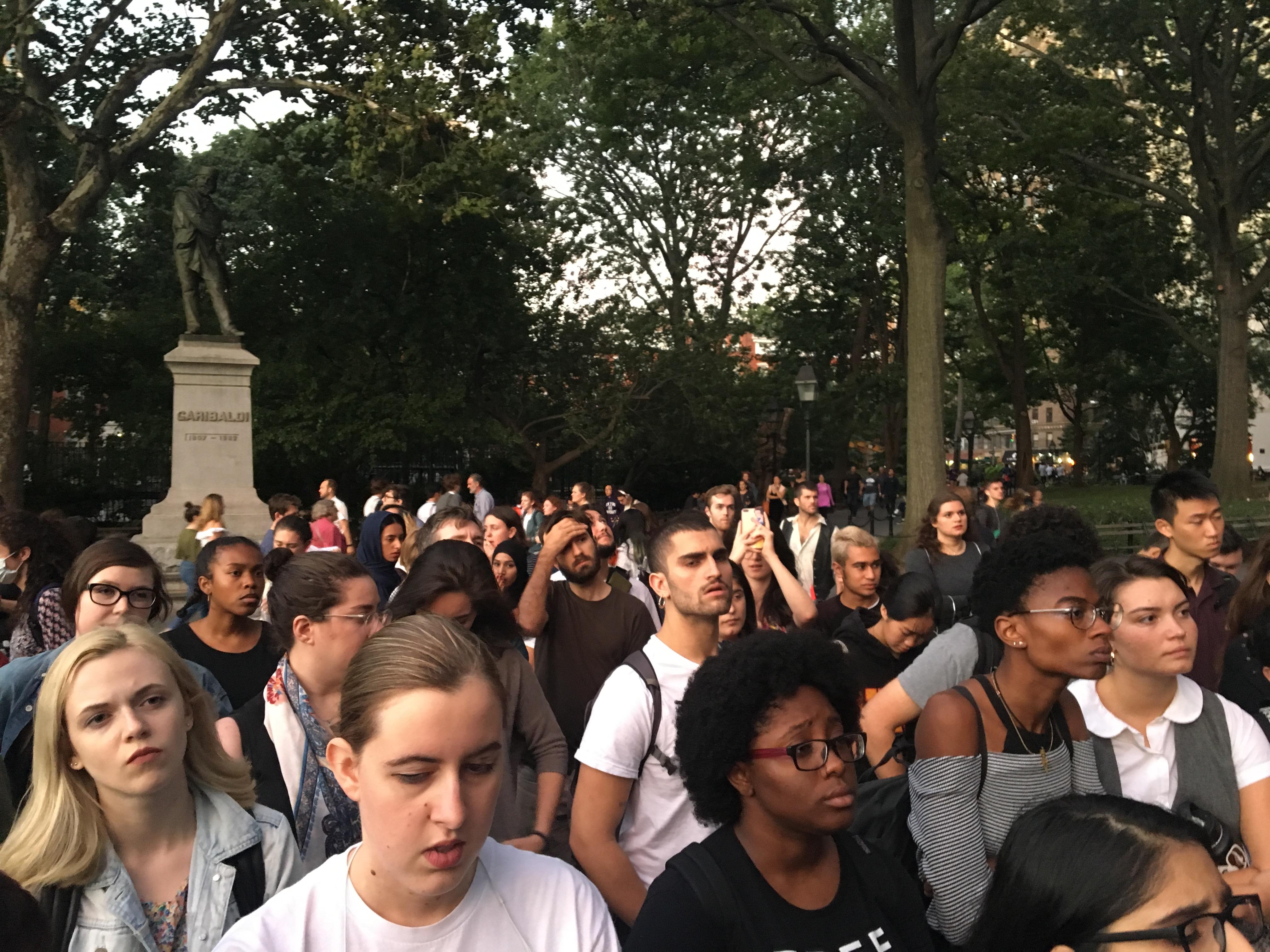 A crowd gathers to hear student leaders speak at the rally

The NYU administration has not yet taken an official stance on the events of Wednesday. “I would like to see [the university] condemn the leaflets that we found,” said Zinevich. “I’d like them to figure out who placed them [using] security cameras.” 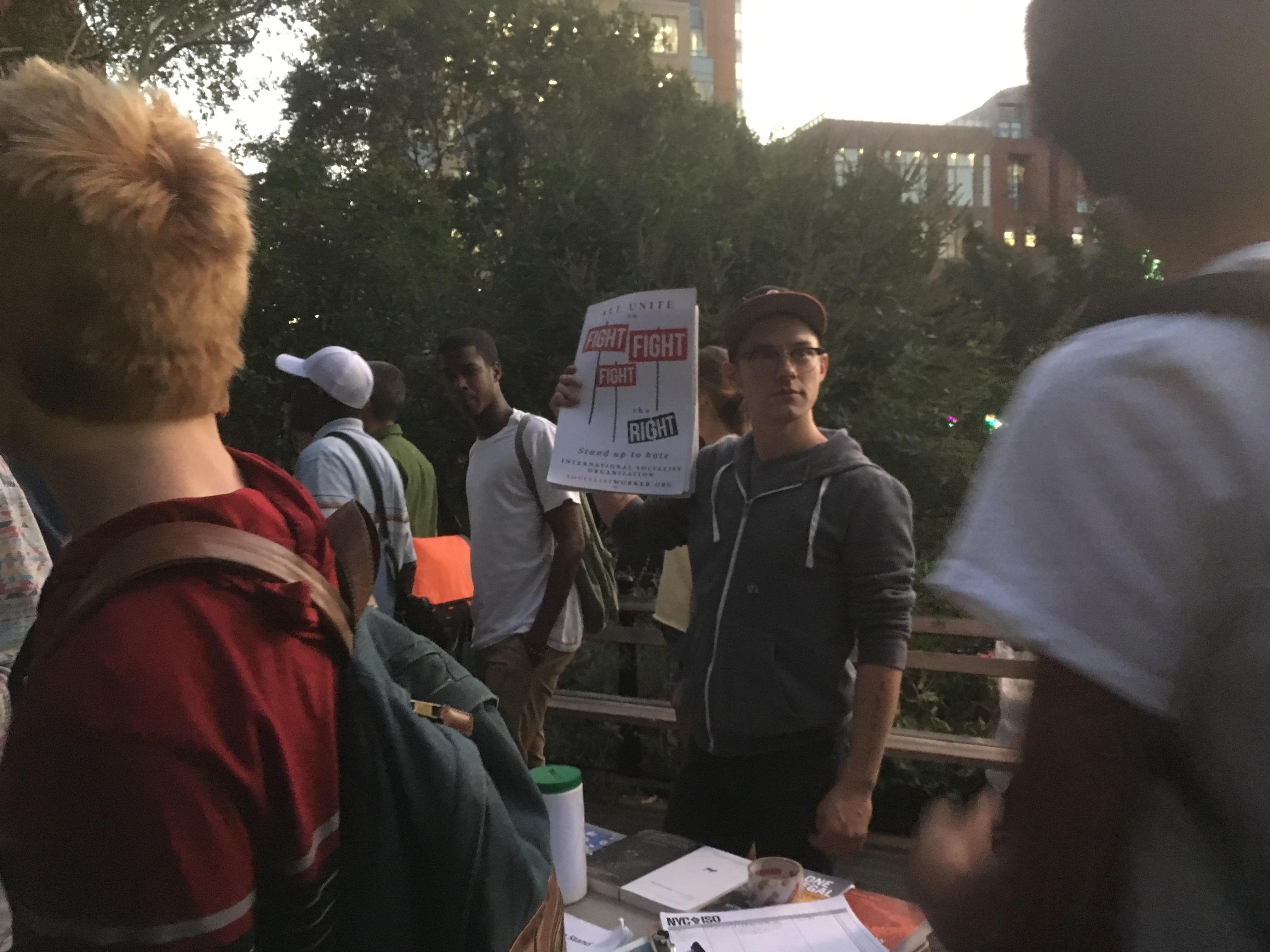 A student from NYU ISO distributes the organization's material

Other student leaders are calling on the administration to step up and be more vocal in the face of incitations to violence on campus. Right now, the university isn’t doing enough, said the NYU Asian Pacific American Coalition President, Aree Worawongwasu, as the school “should take more concrete measures in protecting [its] minority and marginalized students.”

This isn’t the first time that white supremacist ideology has materialized on NYU campus. Shortly after the November 8th election, the Islamic Center prayer room at the Tandon School of Engineering was vandalized, and a student found swatzikas post-it notes stuck to her door in Gramercy, just days later.

This morning at the NYU Tandon School of Engineering, Muslim students found "Trump" scrawled on the door of their prayer…

Last February, when far-right comedian Gavin McInnes was invited to host a seminar for NYU’s College Republicans, 11 anti-fascism protesters were arrested outside Kimmel. “The university did barely anything to stop [McInnes],” Worawongwasu recalled. “Protesters were doxxed online and the university didn’t do to protect these students or even acknowledge it publicly. It’s more about face than anything.”