Meet the NYU student who founded the only push service in the country for protests, rallies and activist trainings

NYU students are typically busy people – most of us are tackling four classes, jobs, internships and maybe even confusing and complicated love-lives. But if you’re NYU Junior Sara Nason, you’re probably looking for another, more appropriate word to describe just quite how busy your semester has been.

Just under three months ago, Sara – alongside fellow NYU student Arsh Harjani – founded Resist X, a daily and weekly SMS and email service, altering users to the protests, rallies and demonstrations going on in their area. Since it is foundation, Resist-X has expanded to three cities in the U.S, with plans for further expansion already in the works.

The Tab sat down with Sara – in the little free time she had between her classes, media requests and running her non-profit – to talk about Resist-X, how to get involved and her plans for its future.

Resist-X is a daily SMS and email service that provides you information about protests, rallies and demonstrations going on in your area each day. We’re in Dallas on a bi-weekly basis, D.C on a weekly basis and New York on a daily and weekly basis.

So it’s email and text?

In New York, it’s email and text, but in DC and Dallas it’s just email.

Was there a particular event that spurred you to start it or was it something that you’ve been thinking about doing for a while – what was the initial thinking when you started Resist-X?

I was at the emergency protest for the first Muslim ban at the Federal Court House in Brooklyn and I turned to my friend Arsh and said – “There should be a text service for this…somebody should send out texts letting you know about the emergency protests going on” and I didn’t think I had the skills to code and API myself (which I found out the next night). But he texted me the next day and was like, “We should do it!” And then that night, we sent out our first update. 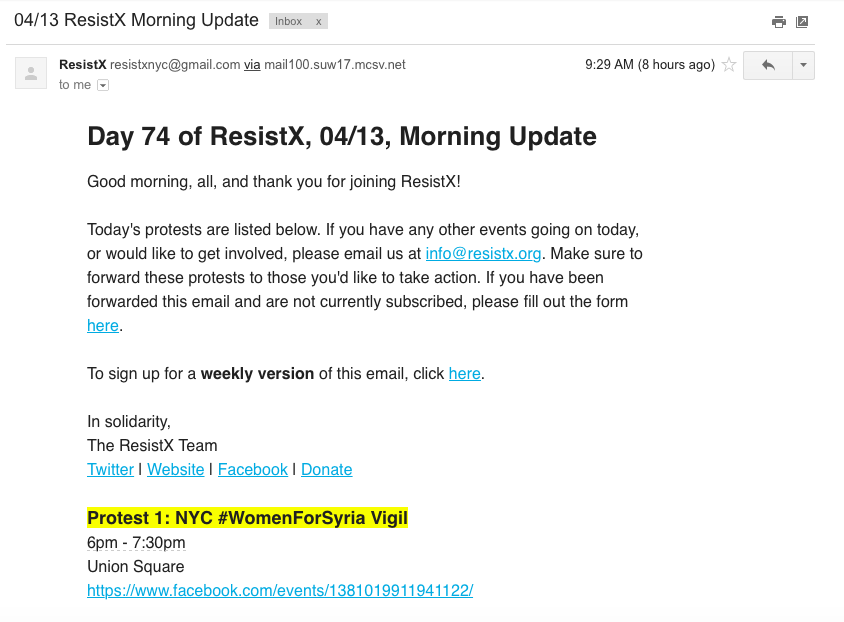 How did you decide to go into Dallas as the third city?

Because somebody emailed me and was like “I want to do Dallas” and I said “You live in Dallas? OK great!” And then they came and we talked in New York.

Did you expect it to take off like this and this rapidly?

No. I didn’t really realize what kind of service we were providing until hundreds of people had signed up and I thought “Oh, you actually want this!”

UPDATE: In addition to the #BigApple ? we have officially launched our daily protest email & text services in #WashingtonDC –go check it out!

Yeah because it’s only be a couple of months.

Literally nothing. So it’s interesting because I have to call myself a CEO when I walk in a lot of rooms and people ask “Oh, what else do you do?” and I go “well, I’m a full-time student, I don’t know what else you want from me!”

Want to join in on rallies in New York City like the #LGBTsolidarityrally? Want to exercise your right to stand up for the human rights of fellow New Yorkers? Sign up for #ResistX to stay in the know on #protests happening in and around the city using the link in our bio.

What does it take to organize the service?

We now have 20 team members – give or take depending on the week – and so our friend Lilly – who’s at Berkeley right now – is our lead developer. Lily sets up the code for the API and has set up a text system for us.

Where do you get the information from?

We just scrape – hand scrape. We go and find it everyday – and we have someone whose job that is specifically for New York. I scrape for DC, Lena, who’s in Dallas, scrapes for Dallas and then somebody sends out the daily and weekly emails in New York and then I send out Dallas and DC.

It’s usually connected to Facebook just because they have a better way to organize all of it, but that being said they don’t really have an accumulation of rallies and protests on one site, so you have to search through it.

Is there a plan to expand further soon or is it about establishing these places first and then going to other cities?

Well we’re doing a Progressive Education Network in Dallas and DC which means it’s an education to action model, as supposed to action to education which is in New York…so those are our two kinds of models for every city and it depends on what the city looks like.

So I want to be in Charlotte just because that’s where I’m from and also there’s a need for what we’re doing, but in a more organized way. We’ve also got some questions about being in Albany and being in San Francisco so I think we want to expand there as well…But we want to be in 20 cities by the end of next year or even by August, hopefully. 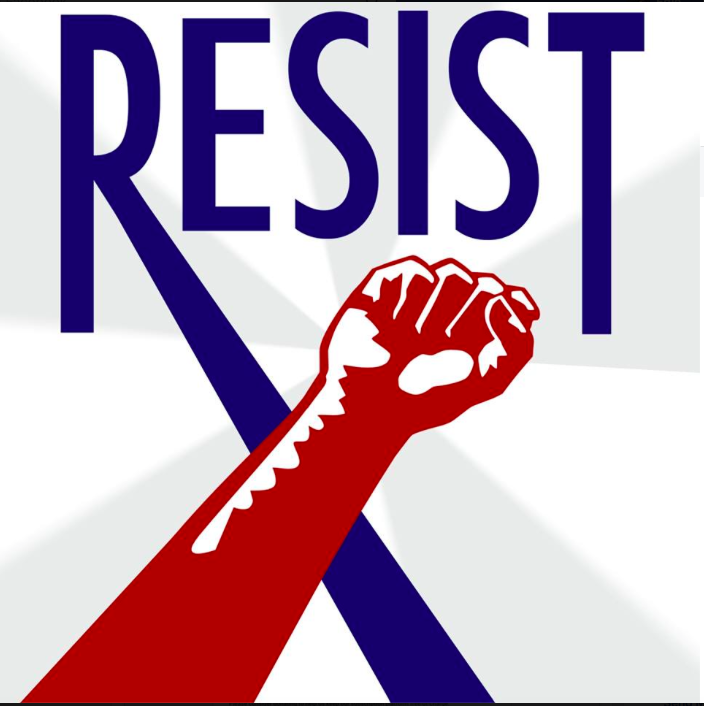 At the moment, there are so many non-profits and organizations that need our money. What’s your pitch to say why [Resist-X] is the place where you should donate your money?

Well the thing is, we’re a 501C4 which means that we’re not a tax exempt organization so you can’t write us off when you donate. Which means that we can’t get most grants and most corporate funding, which is where a lot of non-profits get their funding from. So everything that we do is crowd-funded – up to this point. The only way we can continue is if our user base supports us financially, or we find some other funding.

But I think that – there are a lot of resources out there that are important and it’s important to help people try and figure out what they are passionate about but I would say that the biggest need – in terms of resistance technology right now – is a community connector and I think that’s the void we’re filling. So I would say that we are the only push service that exists in the country for protests, rallies and activist trainings and I think that’s something that a lot of people need, particularly if they are in a heavy protest area.

By supporting Resist X – either by volunteer time or with a contribution, it helps us run longer and helps us reach more people and it helps us connect more people. I think ultimately, it is not about us getting the money, it’s about us being able to provide these connectors with other people and give you more tools and opportunities to get involved, in a way that nobody has really done before. 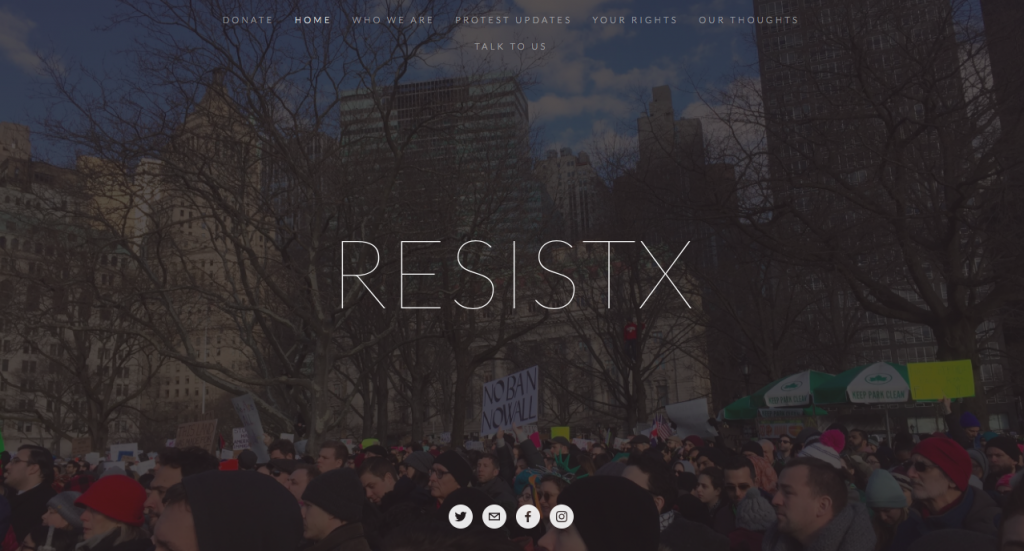 How do people volunteer and donate?

Go to Resist-X.org and there’s a donate button on I think every single page. And then just volunteering-wise, if you have a skill that you think you can contribute, just email [email protected]….any time you can contribute in terms of a specific skill would be extraordinarily helpful.