Most of us have done it. We’ve snoozed the alarm, gone back to sleep and watched the minutes tick away until eventually reaching the conclusion that no, there’s no way I’m making it to class. And it makes sense; maybe you’re hungover or maybe you were up all night watching Netflix because you just had to know how the season of House of Cards would end.

But you’ve also probably wondered how much money you lost by missing that class. In case you have, we calculated just how much of your tuition you’re spending for those extra hours of sleep.

On average, an NYU student takes four courses a semester which typically (though not exclusively) consist of two lectures and one recitation per week. A semester is 16 weeks so using these assumptions and factoring the base tuition for a semester (excluding room and board), we calculated the average cost of missing a class at each school at NYU, rounded to the nearest cent. 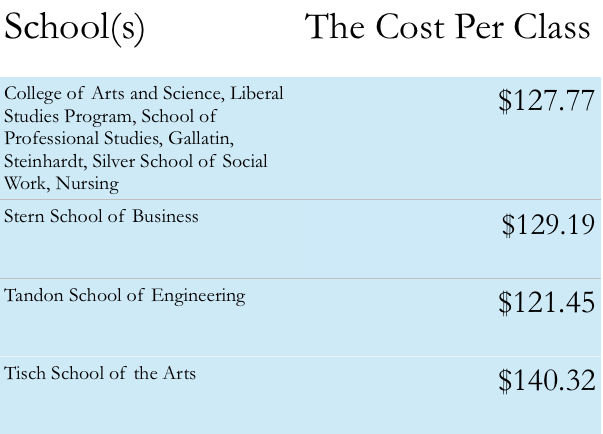 Just for some context, with the money you lose missing a single class at Tisch, you could buy over 75 bagels from Bagel Bobs, 85 Insomnia Cookies and ride the subway 51 times. So speaking for myself, I’m certainly going to think twice before missing a class again.