Interview with NYU student Fadumo Osman: Co-founder of Now It’s On Us

‘We can’t just sit around and wait’

Whether you are someone who volunteers for political candidates, someone who is at every march and protest wielding a carefully curated sign or even if you’re someone who just prefers to post the occasional pointed political Facebook status update, we are living at a time where it is becoming increasingly difficult to find an excuse to not be politically engaged in some shape or form.

Now It’s On Us – founded by Fadumo Osman (NYU CAS ’18) and Josh Dean (NYU Stern ’16) – understands this reality and is making it easy for you to become politically engaged in an efficient and effective way. 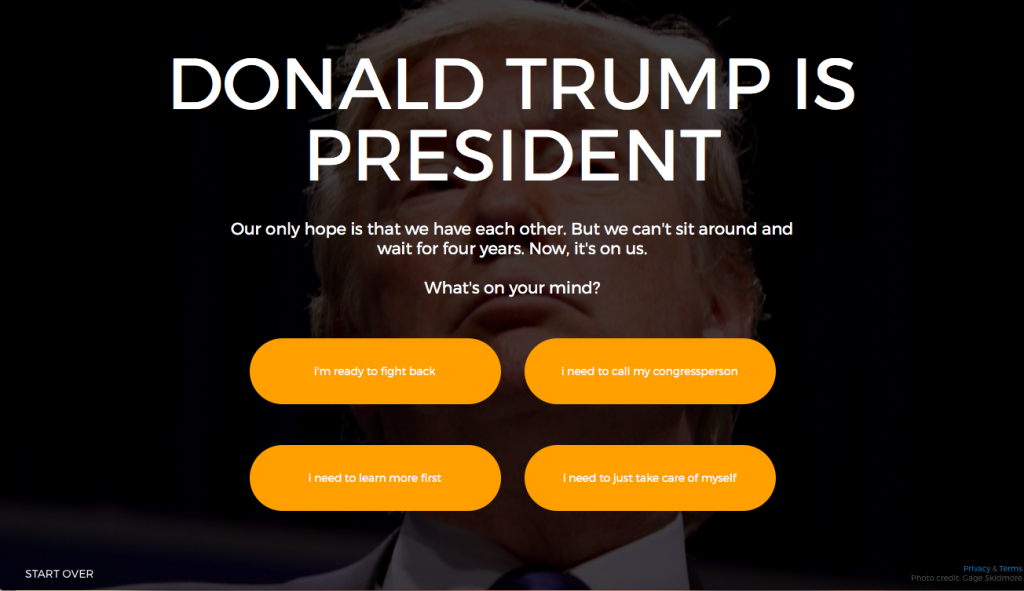 The response platform – founded in 2015 – is set-up to target the ‘slacktivism’ among Americans, particularly young Americans, and lays out clear and concrete ways to stay involved and informed on today’s issues.

The website is divided in four sections for its users. “I’m ready to fight back” directs users to a choice of issues with which they might want to get involved and upon selection, provides links to organisations that focus on activism in these areas. “I need to call my congressperson” asks users to enter their Zip code so that the site can identify the names and numbers of the members of Congress they should call. “I need to learn more first” links users to information on the areas of policy, including informational videos that outline clearly the aspects of the issues within these areas. The fourth and final section – titled “I need to just take care of myself” – focuses on self-care, including links to videos of cute babies and dogs (always a easy mood-improver) and the assurance that at least – despite anything else – SNL will be better.

The Tab spoke to Fadumo Osman – a junior in CAS and one of the co-founders of the platform- about the creation of the site, its future and the importance of activism in this current moment. 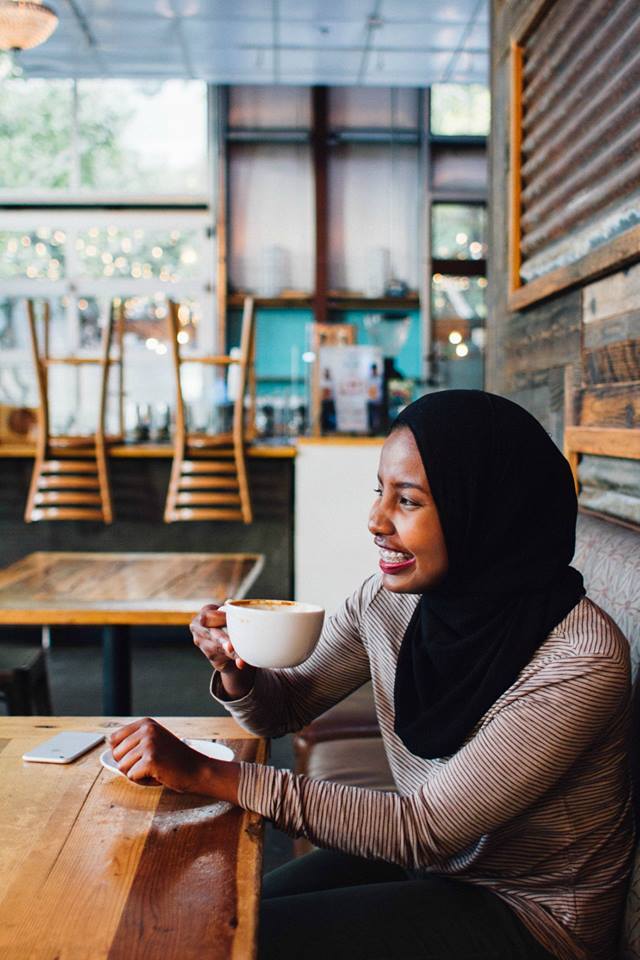 When and why did you start the site?

“Josh Dean and I co-founded Now It’s on Us following the tragic shootings in Paris. We didn’t start it solely due to that single catastrophe, but because we found ourselves constantly discussing the slacktivism we were taking part in, as well as our friends. Meaning, every time a tragedy strikes, where it be a terrorist attack or a natural disaster, we observed how many people simply posted to Facebook while relaying their “good thoughts and prayers” and then moved on. The vast majority of those who partake in this “slacktivism cycle” are well intentioned and don’t always know what other steps they can take.

Thus, we started Now It’s On Us as a rapid response platform to immediately give our users the tools they needed to make a difference. Each cause or event would be given a dedicated page in which users could take several steps: donate to the top 3 or 4 relevant organizations, sign a White House petition pushing for the President’s office to take notice, and the contact information of their representatives so that they are able to relay their concern to them as well.

From the bombing of Syrian hospitals to mass shootings on U.S. soil, to the hateful rhetoric of Donald Trump’s campaign – the campaign layout worked and we were able to get a following through our users knowing if something happened, they would be able to be proactive and come to us for next steps.”

The site was started just over a year ago, how has the mission of the site changed? And what is its role now?

“Our core mission of converting our users from slactivists to proactive and knowledgeable activists has not changed. What has changed is the face of what we’re equipping those who visit the site against. We’ve shifted our focus to completely resisting the Trump administration. Why? Every cause that we’ve advocated for before Trump was elected has come under attack through his rhetoric and his legislative actions.

From women to Muslims to immigrants to our digital privacy and the future of our planet – this administration is essentially an all-for-1 deal in the issues that Now It’s On Us strives to call attention to.”

What was your thinking behind the new layout?

“There has been a definite increase in civic engagement tools in recent months. From online platforms to constituents mobilizing in person to plan “the resistance,” we’ve taken note of what we want to be and what we don’t want to be.

Our mission is to help our users take care of themselves, learn, and take action in an easily digestable way. We are not a solution to ensuring Democrats take the House back, but we are able to remind our users, no matter where they fall on the activism spectrum, of what should be at the top of mind for them.”

#NowItsOnUs to continue the fight. We've re-launched our platform to help with self care and resisting #Trump: https://t.co/KPnkt6byW2 pic.twitter.com/rO8TH4RfNQ

There’s a section of the site dedicated to self care: why do you stress the importance of this?

“Many can attest to being absolutely consumed and exhausted by the events that have occured in recent weeks. Those who’ve never felt the need to protest are leading their friends to their townhall meetings.

While seeing the millions that have began to mobilize, it is extremely important for anyone, no matter how long they’ve been organizing for, to take note of not only their physical health, but their mental health as well.

You are not able to help others, if you can’t help yourself. That is why we included a self-care tab on our site that we plan on expanding soon. Even constant news alerts will hinder one’s ability to remain optimistic and proactive in their efforts. While I don’t believe ignorance is bliss, I do believe that logging off and taking breaks whenever needed while also seeking the appropriate help (if needed) is a neccessity to be able to continue the fight.” 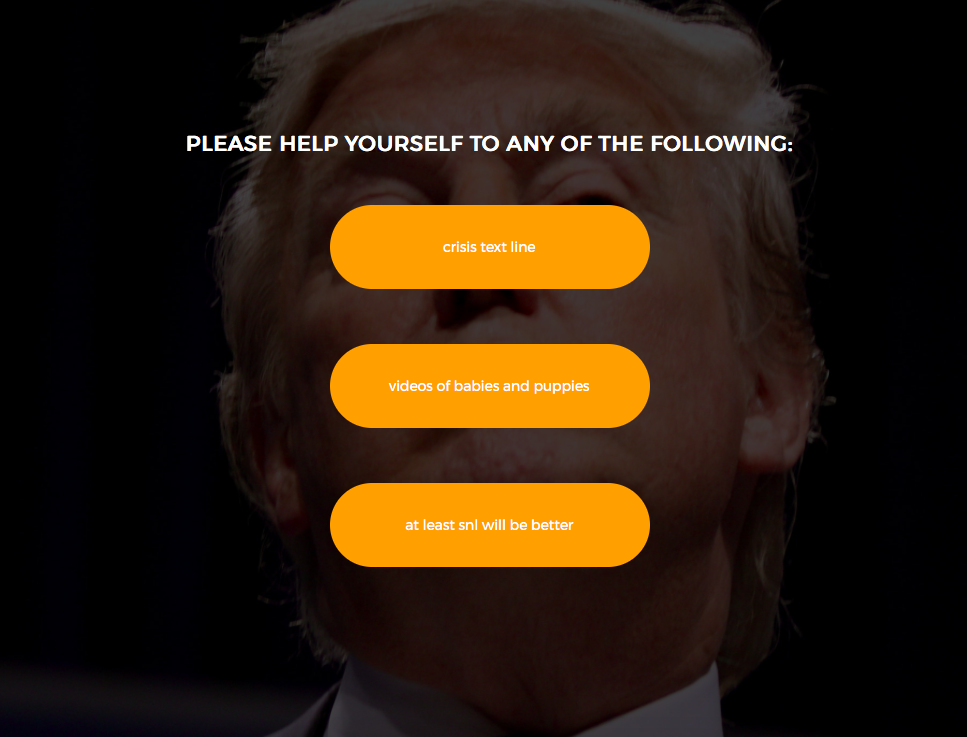 In terms of the future of the site, do you want to extend it further (and if so in what direction) or do you think right now it is good where it is?

“At the moment, we are testing push notifications on our web application as we want to be quite literally right there when a grim Washington Post or New York Time’s alert pops up. This will be huge in mobilizing those that don’t necessarily have the time or ability to keep checking our feeds and site with prompt. That’s one thing – stay tuned!”

Regardless of who you are or how you identify, it is imperative that people living in the United States and under Donald Trump’s Presidency stay informed and active. But, as we are inundated with information and news stories about what – in my opinion – feels a bit like a dystopian nightmare, it can be difficult to know where to start. Now It’s On Us is laying out what you need to do in a simple and effective way. It’s work is based on the simple truth; “Donald Trump is President. Our only hope is that we have each other. But we can’t sit around and wait for four years. Now it’s on us”.