Chaos broke out after a speech by Gavin McInnes

Chaos broke out in Kimmel last night, as protestors stormed the building to voice their anger against Gavin McInnes – notorious conservative speaker and Vice Media co-founder – who had been invited by the College Republicans to speak at one of their weekly meetings.

The NYPD – alongside the campus police – were out in full-force even prior to event and were forced into action when a fight broke out between the protestors and supporters of Gavin McInnes, including one individual wearing a “Make America Great Again” hat.

As reported by Washington Square News, McInnes spoke for 20 minutes to the College Republicans before being escorted out of the building, having already been pepper-sprayed upon entering the building before the talk.

Gavin McInnes is notorious for his conservative commentary, including comments on the need for greater border control and for people to assimilate to a “Western, white, English-speaking way of life”, as well as comments concerning ‘free speech’ in the U.S. 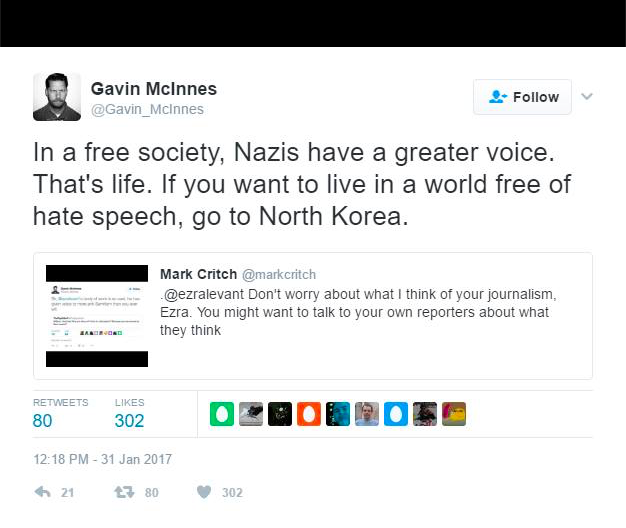 After the fight was broken up, witnesses saw students and protests being arrested as a consequence of the fight. According to ABC news, 11 people were arrested after the protest, including NYU students. This footage shows an apparent NYU student called Quinn being escorted to a police car – having allegedly had an altercation with a Trump supporter – and being cheered on by his fellow students for standing up to the supporter. 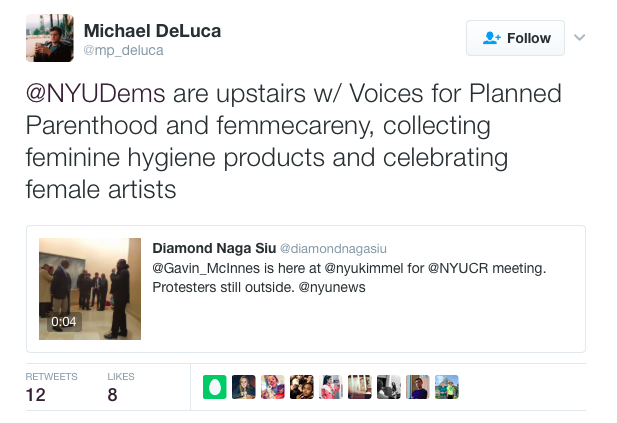 The club has also released a statement, addressing the event and the work it is doing, amidst the chaos caused by this invitation extended to Gavin McInnes.

“Last night, the NYU College Democrats cohosted an event with a new club on campus – Voices for Planned Parenthood – and FemmeCare, an initiative by NYU arts students dedicated to removing the stigma on menstruation and helping the women of NYC. We celebrated the accomplishments of female artists, discussed opportunities for activism, and collected hundreds of feminine hygiene products that will be donated to a women’s homeless shelter. We are proud of every guest that we host, the work that we do, and the causes we advocate. Despite these trying times, it is always helpful to know that we are on the right side of the barricades.” Read the full statement here.

There were two political groups on campus holding events last night, one of them was raising awareness for an organization that gives women the opportunity to take control of their own bodies, the other was hosting a speaker who takes pride in being called a Nazi. I’m just saying.