Jaden Smith kicked off #HEWILLNOTDIVIDEUS, the newest art installation by LaBeouf, Rönkkö, and Turner, on January 20th, Inauguration day. He stayed for over six hours, drawing a large crowd, creating a communal and moving atmosphere. Immediately, the message started to spread and draw supporters to Astoria from all over New York and even out-of-state.

Masses of people came, shared their voice in front of the camera, took selfies with Shia, shouted out their Instagrams, stayed a few hours, and left. Some people stayed for full days, getting to know each other and exchanging information. Others watching the livestream from home and called nearby pizza and chicken finger delivery services, sending much-appreciated food to dwindling HWNDUers in the cold hours of the evening.

Several Trump supporters began to trickle in. They wore MAGA hats and signs, creating their own counter phrases of “He will unite us” and “He will not incite us,” and began to stir up discomfort among the gatherers by starting political discussions, contrasting the intention of the art piece to focus on the five-word phrase. One man, who goes by Clarence, declared that he hates Shia LaBeouf who is a “horrible actor,” but despite that he felt like coming out to stir the pot.

Still, Sunday’s vibes were generally welcoming and united. One man came all the way from Toronto to join in the movement, and another man brought a guitar and led everyone in singing.

That afternoon, a Neo-Nazi hijacked the camera saying “1488” and “We ensure the existence of the white race,” prompting LaBeouf’s powerful response that quickly went viral.

White supremacist yells into the camera and Shia LaBeouf shuts him down. This has been a very interesting live stream. #HeWillNotDivideUs pic.twitter.com/CqY9pLobWi

At the end of this video, however, LaBeouf reiterated the purpose of #HWNDU, “It’s not about being pro-this or pro-that. Everyone’s invited. Just be nice, be nice to each other.” In response, alt-righters online have claimed that people who disagree with protest aren’t included in the “everyone,” while supporters of LaBeouf counter that pro-Hitler arguments and anti-Semitic slurs are neither respectful nor nice, and therefore not welcome. 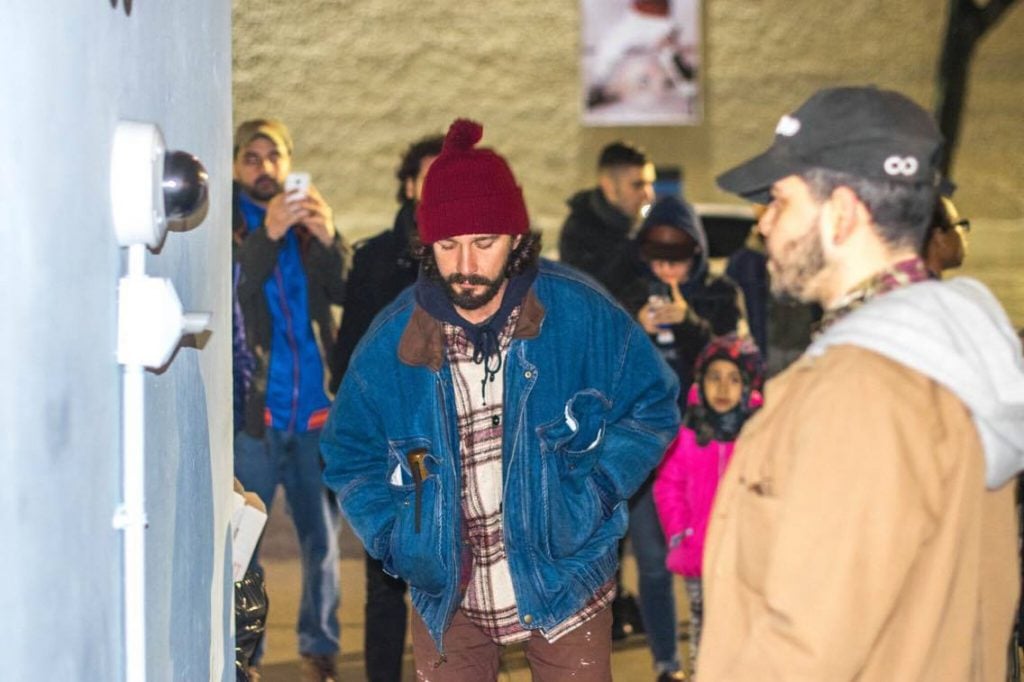 The livestream saw decent-sized crowds, and although the number of anti-HWNDU protestors grew, conversations were relatively calm and respectful.

This video was posted.

Around 12:30 am Thursday morning, an incident took place off-camera where a man claimed LaBeouf pushed him and pulled his scarf, while a supporter on camera said “He didn’t hit you. He moved his face thing. Shia didn’t hit anybody, alright?” Soon after, LaBeouf was arrested, charged with misdemeanor assault and a harassment violation. Following an outpour of support on Twitter via the #FREESHIA hashtag, the artist was released before 4 a.m. and returned briefly to the installation.

Thursday progressed into a media frenzy, with coverage focusing almost solely on Shia’s arrest. Anti-HWNDU Reddit and 4chan groups organized online and came to the installation, trolling supporters. It seemed many of the new attendees were there for the hype and media attention, rather than for the installation’s core message. A man wearing a camouflage uniform, who later introduced himself to me as John, stood just outside the camera’s frame and held a speaker close to the mic, playing music to drown out “He Will Not Divide Us” chants.

Racist harassment against supporter Paperboy the Prince of the Suburbs escalated, and a swastika-logo’ed Wiki page began to screenshot and categorize the installation’s attendees into “our guys” and SJW “whores.”

The crowd swelled to about 50 or 60 by 10 p.m., prompting back-up police cars to arrive and briefly block off the street. Soon, there were approximately twelve officers present, keeping a close watch on the increasingly rowdy MAGA crowd and quieting the loudly chanting HWNDU supporters, whose numbers began to dwindle. Despite several of the Trump-supporters being admittedly and visibly drunk, and one of them urinating in a corner of the installation, the tension did not turn violent, and as of midnight no arrests were made.

The day started off with leftover Trump supporters from Friday evening, including one named Salvatore who showed his “Proud Boy” tattoo to the camera, as a shout out to fellow members of the “white chauvinist” group who “refuse to apologize for creating the modern world.”

A strong group of HWNDU supporters, including Paper, tried to regain the original message, but by the afternoon they became heavily overwhelmed by trolls, including one girl holding a racist “We Wuz Kings” sign, and a man with a sign reading “Real Moldbug” – a reference to the pseudonym Mencius Moldbug of American scientist Curtis Yarvin who is controversial for his theories that white people genetically have higher IQs than black people. Sam Hyde also made a late-afternoon appearance.

The purpose of #HEWILLNOTDIVIDEUS is to be a “show of resistance or insistence, opposition or optimism, guided by the spirit of each individual participant and the community.” Although it started out unified, the art installation’s message is being trampled by Neo-Nazis and anti-Semitics. At this rate, although LaBeouf and his supporters are working to maintain the artwork’s original good vibes, it’s going to be a challenging four years.