The event is on November 16

Alongside 45 other universities nationwide, NYU will be walking out of campus on November 16th as part of Movimiento Cosecha’s #Sanctuary campus campaign. The campaign is committed to putting bodies between President-Elect Donald Trump and the country’s most vulnerable students.

The event – created by NYU student Hannah Fullerton and other students – outlines the set-up of the walk-out as well as its aims: 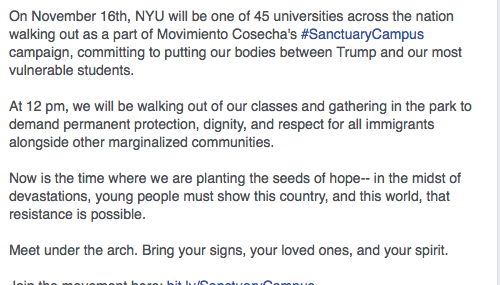 The walk-out will begin in Washington Square Park and is organised to take place between 12pm-1pm this Wednesday.