We signed, they listened

Earlier this month, the Tab reported a petition-released by the Students of Sexual Respect at NYU for free-mensural health products at campus buildings. The petition has since received over 3000 signatures and the administration have now reportedly taken steps to making this a reality.

According to a press release issued today by the writers of the op-ed and organisers of the petition Josy Jablons (’17) and Meghan Racklin (’16), “the Senior Leadership of New York University has informed student leaders that it is convening a working group to propose a pilot program for the distribution of menstrual hygiene products (MHPs) at no cost to students. The group will comprise both students and staff, and the pilot program will be implemented in the upcoming spring semester.” 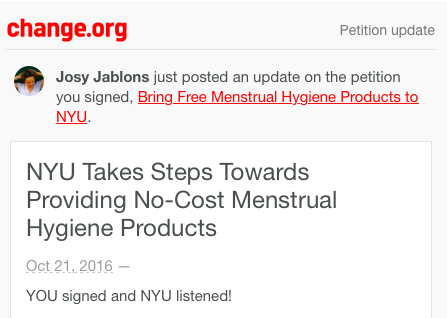 As they outlined in their petition, students at NYU spend over $10 a month on MHPs, which is a extremely high price to pay for students who are already dealing with ever-increasing piles of debt. This program would be a huge step forward in eliminating the financial burden and discomfort caused by the inability to find free MHPs in NYU facilities.

Jablons and Racklin expressed their happiness for the success of the petition and their continued commitment to the cause:

According to the press release, “The working group will be chaired by Dr. Marcy Ferdschneider, Medical Director of the Student Health Center, and will make its recommendations to Marc Wais, Senior VP of Student Affairs, by December 23rd. The University will evaluate the pilot program’s success over the summer of 2017 and then determine how best to move forward.”

This is not just huge progress for all NYU students who know that ever common panic when you can’t find a MHP while on campus but also shows that NYU are committed to eliminating some of the discriminatory barriers that arise to education for some students, not others, on the basis of sex.