They are calling on the Board of Trustees to #RiseWithUs

Update, 1:43am: NYU Divest continues to occupy the elevator. Despite threats of disciplinary action to current NYU students and forced removal for other protestors, administration has not moved forward on any of those threats.

Public Safety is blocking access to other areas of the building. Key administrative members such as Tom Ellett, Senior Associate VP of Student Affairs, are also staying the night. 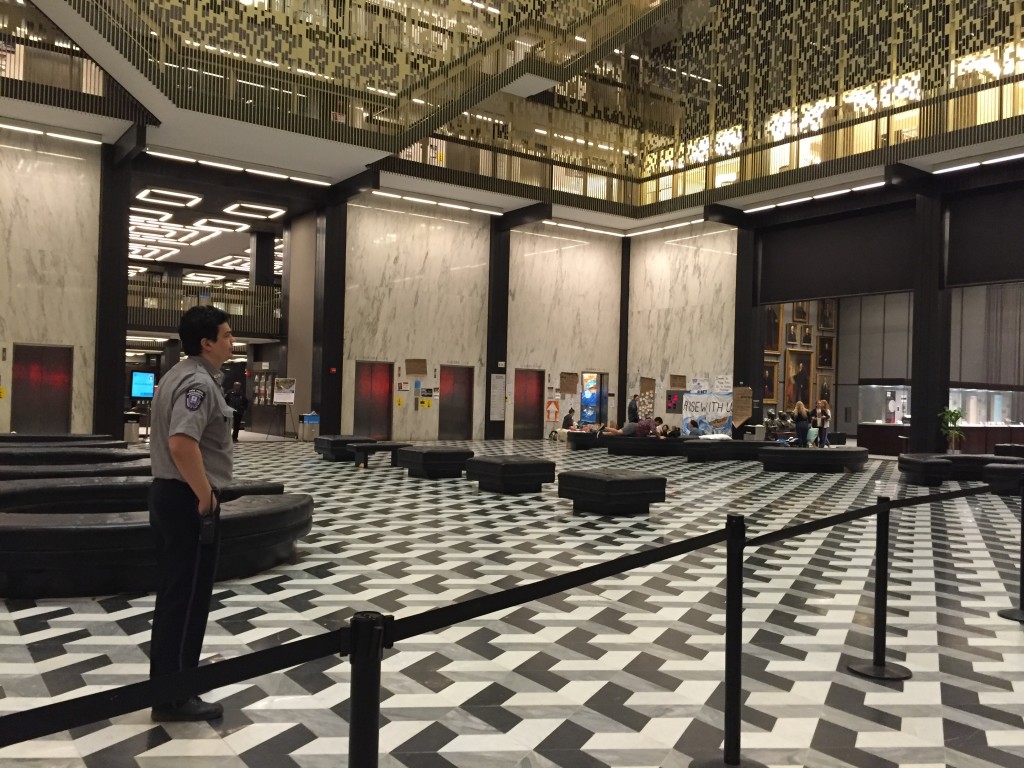 Update, 10:56pm: John Beckman, current vice president for NYU Public Affairs, returned at around 10pm. He told the group that NYU staff will return at 1am to tell the group to leave, and disciplinary action may result for those who stay anyway. Not only did no negotiations take place, but they have effectively stopped since this afternoon.

NYU Divest continues to indicate its intention to stay until its demands are met. An open letter was read before the entire atrium reiterating the group’s demands and its reasons for rejecting earlier offers.

Since 7.30am today, the student group NYU Divest has been occupying Bobst. They are staying in the elevator which goes to the administrative floors, as well as maintaining multiple signs and posters in the lobby and hosting teach-ins.

Although they had previously been riding the elevator along with administrators in the building, Public Safety eventually turned off the elevator. NYU Divest intends to remain in Bobst until the following demands are met, continuing overnight if necessary. 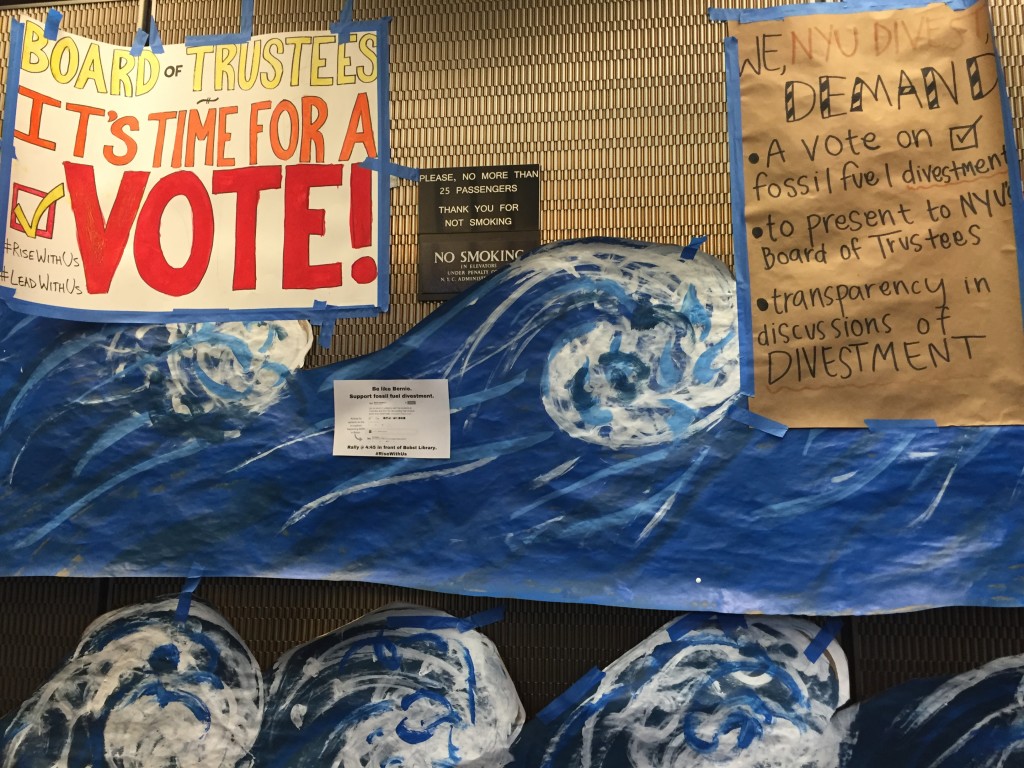 In short, they want to get their previous promised Board meeting, have a vote on divestment, and transparency in divestment discussions. 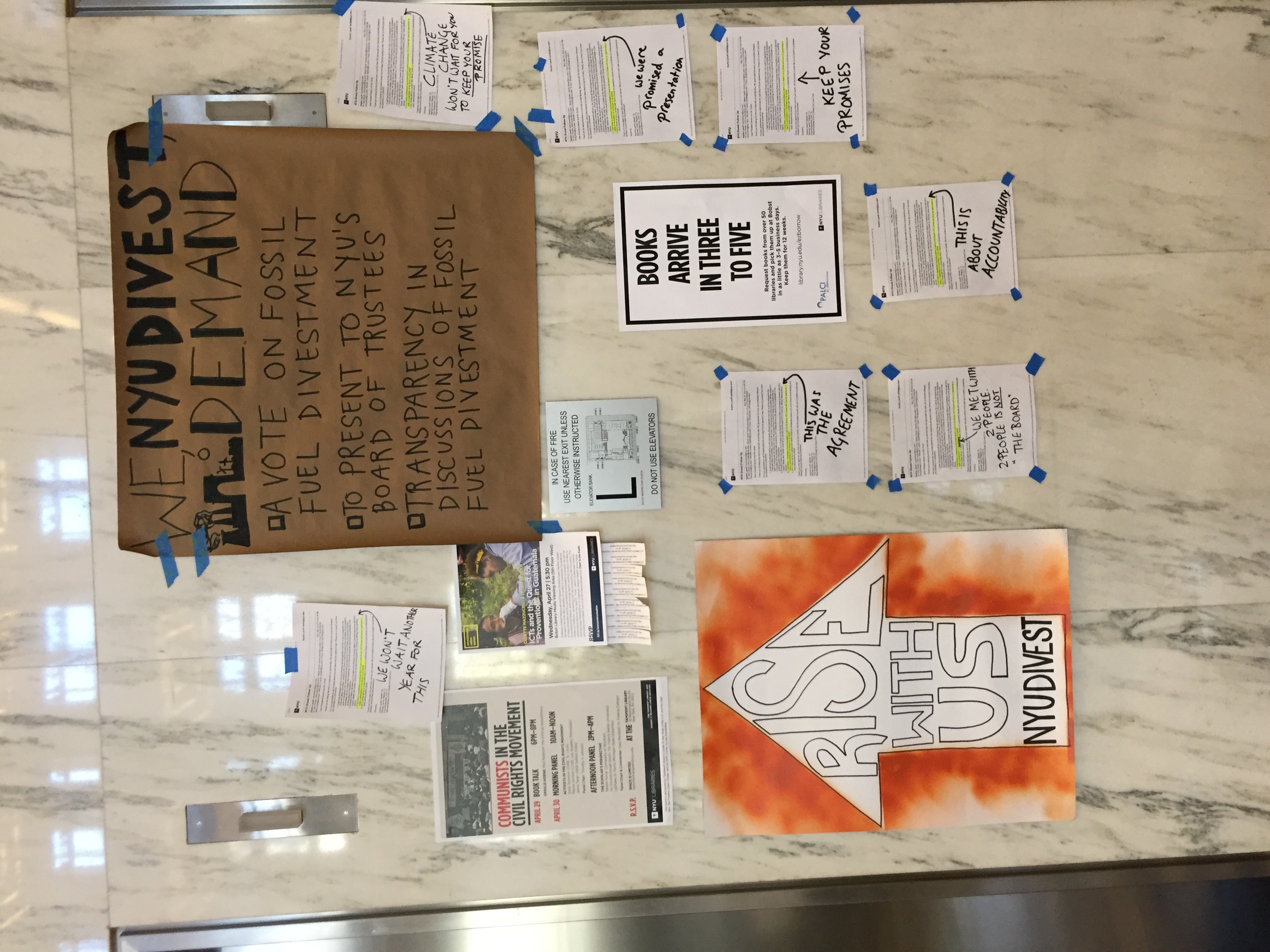 In May 2014, John Sexton said that if this group received a favorable resolution through the University Senate, it would get to present to the full Board of Trustees. In April 2015, such a resolution was passed, but since then, NYU Divest has faced constant hurdles in actually receiving the promised board meeting. 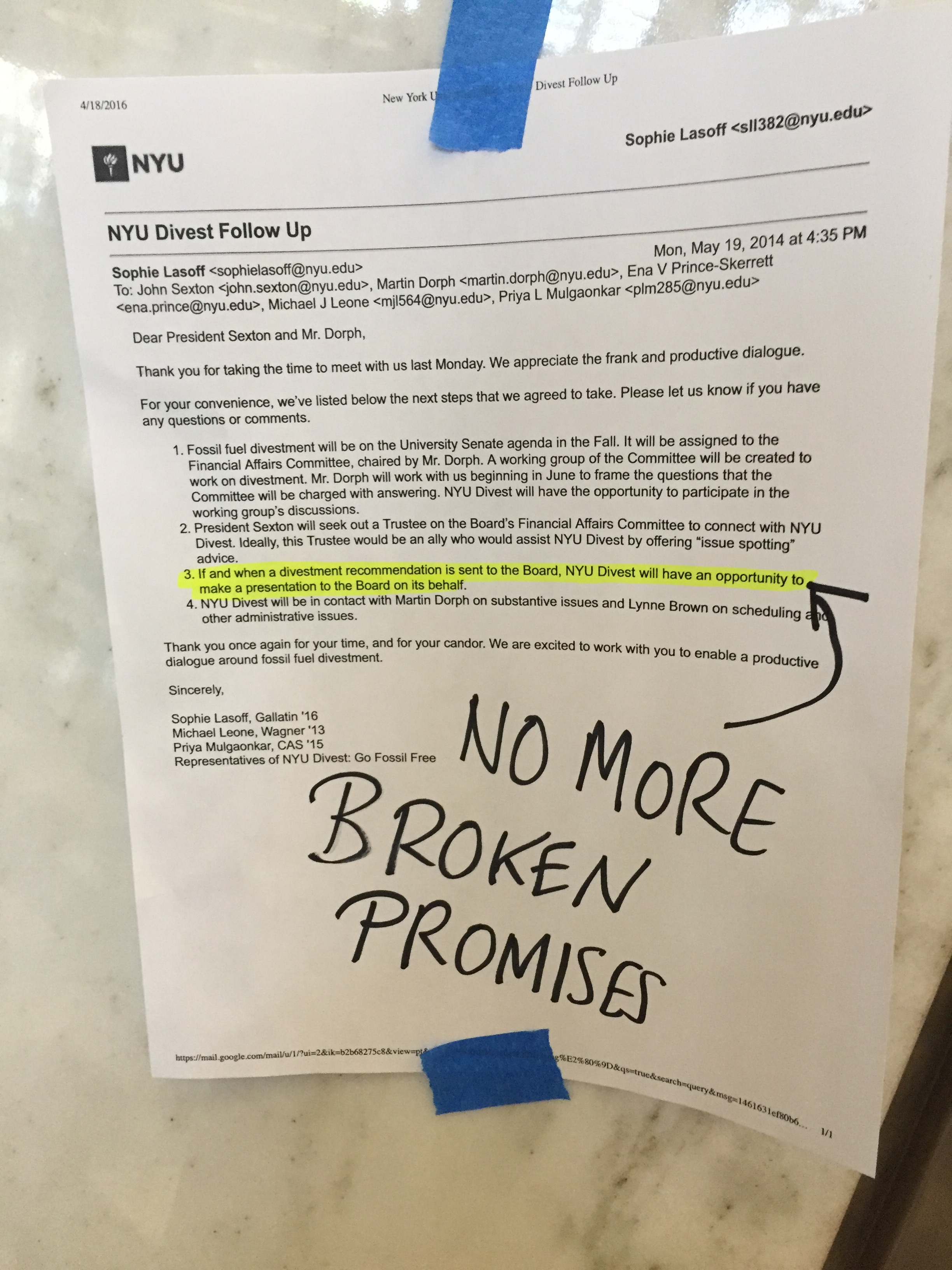 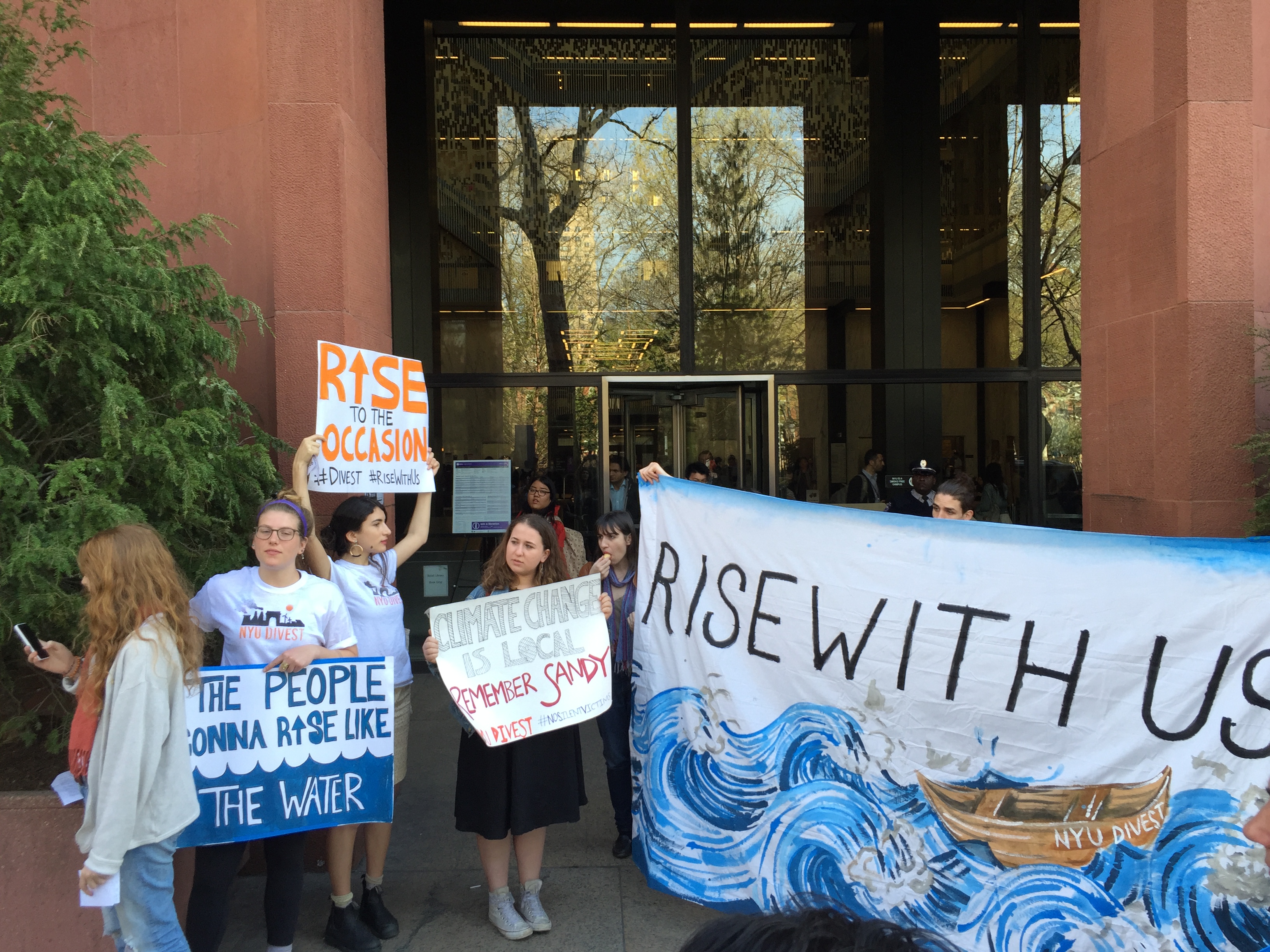 According to Olivia Rich, the liaison between NYU Divest and all media teams, a few hours after today’s sit-in started, administrators started negotiations to end the sit in. Around 5pm, the administration promised the group a meeting with the Investment Committee in exchange for ending the sit-in. As this was not the full board negotiation previously promised, this offer was rejected.

Even Bernie Sanders has endorsed this campaign, as well as a similar one at Columbia, through a tweet sent a few hours ago.

Let us stand in solidarity with the students at Columbia and NYU for demanding their schools divest from fossil fuels. #KeepItInTheGround 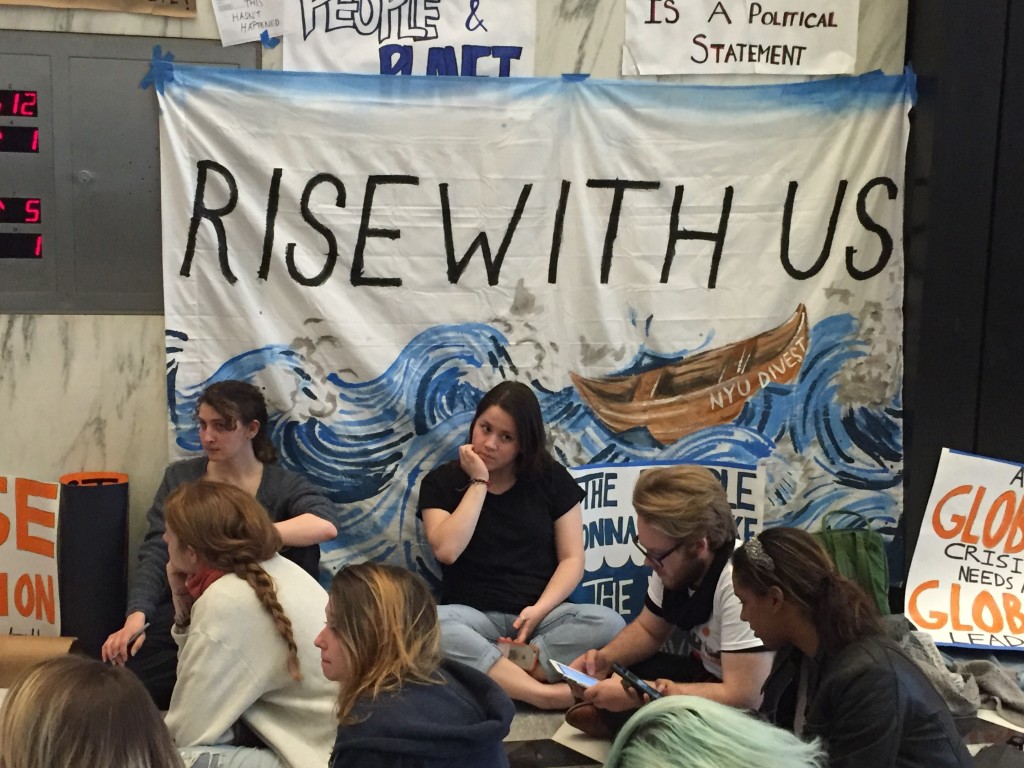 A teach-in that occurred about 6pm.