What you need to know about NYU’s Ally Week

If you’ve seen the signs around campus or the sparkling silver T-shirts-wearing volunteers, you will know that this week is NYU’s Ally Week. (And if you haven’t, now you do know!)

But what exactly is Ally Week and what can you, as an NYU student, do to participate?

Ally Week is an annual week of events and discussions on campus that focuses on the promotion of “allyship” across campus. While many of us may already have a basic understanding of what it means to be an ally, NYU Ally Week clearly sets out the definition of allyship (v.) as being “an active and consistent practice of unlearning and re-evaluating beliefs and actions, in which a person seeks to work in solidarity with a marginalised individual or group of people.”

So many allies! Can you spot #NYU President Andy Hamilton?

Organisers from NYU Student Diversity have outlined the aim of week, running from today until April 15th, to be to “create opportunities for students, faculty, and administrators to deepen their understanding of the experiences of others, and raise awareness of the individual and collective injustices that confront many in our society.”

So what can you do to participate?

There are so many awesome a events going on around campus this week:

RSVP at the links – all are welcome.

Make a pledge to be an ally and get your photo taken for Ally week throughout the week.

Zone trainings – which include Diversity Zone, Dream Zone, Action Zone, Faith Zone, Disability Zone and Safe Zone Training – are crucial aspects of our education on campus and, during Ally week in particular, seek to identify allies and provide imperative knowledge about how to be an effective ally on campus and in life.

As a generation of students who are on our phones more often than we are not, most us love a good bit of social media. So why not use it to participate in Ally Week? Follow the Tumblr nyuallyweek.tumblr.com or the hashtag #NYU Ally Week on Twitter and you can even update your profile picture on Twitter or Facebook with the Ally Week logo (http://twibbon.com/support/nyu-ally-week-2016). 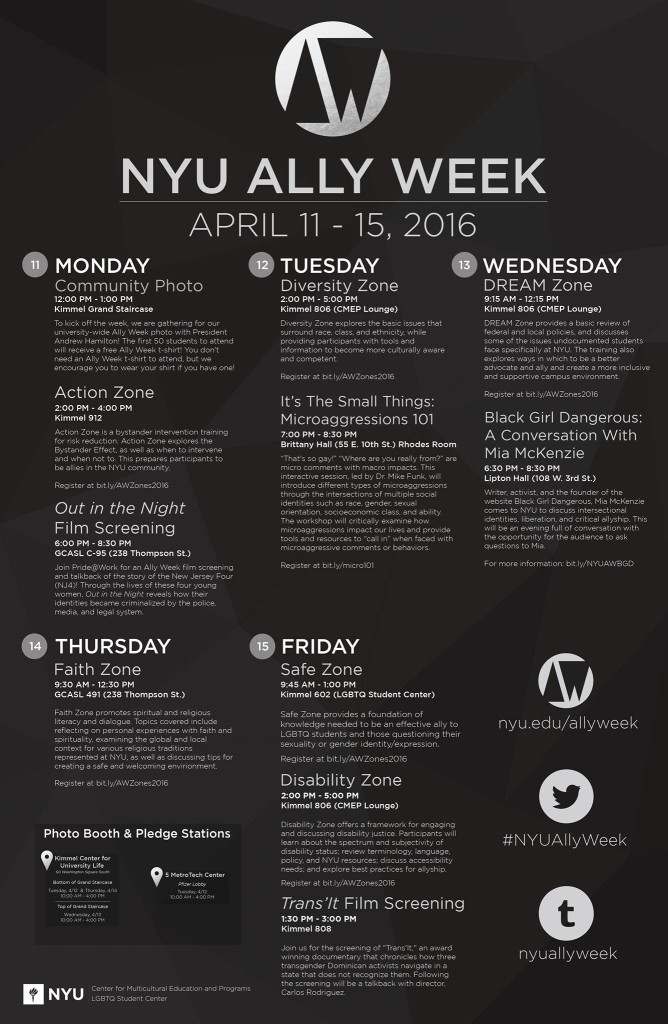 With minority groups still being marginalised, discriminated against and being denied fundamental rights across this country and the world, being an Ally is as important as ever. So whether you are already an Ally and want to identify yourself in that way or you want to learn more about what it means to become an ally, this week is not to be missed.