Today the Black & Brown Coalition of NYU made public their list of demands – and asked students to suggest more.

The group’s current list includes demands for future floors dedicated to Students of Color and Queer students, as well as the funneling of donations from “documented racists” to minority groups.

The group linked to a Google Doc in which students are invited to submit suggestions for new demands, along with suggestions for edits to existing demands or the language of those demands. They also asked students: “What do you need New York University to do for your experiences as a student of color to be respected, validated and addressed?”

According to Devan Symone Worth, Junior Philosophy and Social and Cultural Analysis double major and the Black & Brown Coalition’s (BBC) Coordinator, the list up right now is “the initial list that we made and submitted to the university.” 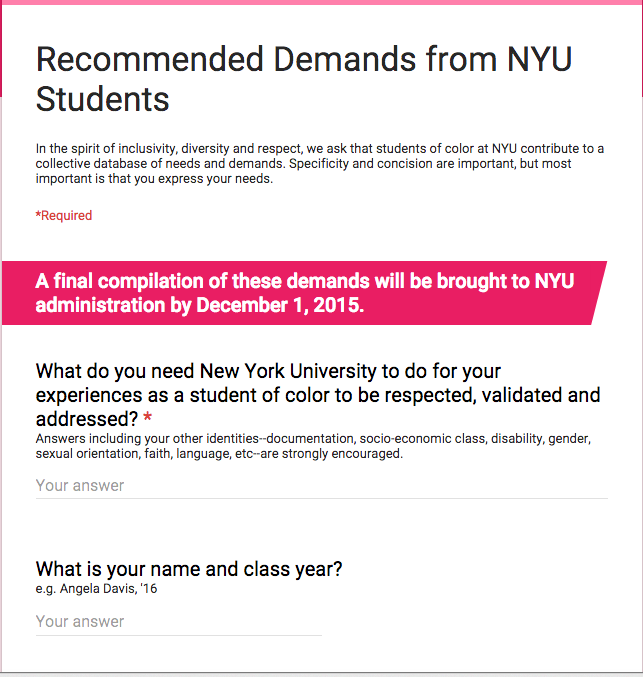 “It’s really just a student coalition right now and a conversation space around all of the issues that we as NYU students specifically experience and also around the country.”

Some of the demands include:

In response to a message from The Tab regarding future developments and the group’s involvement with the NYU administration, a member of the BBC wrote back through the FB page:

“Quite a lot has been discussed between BBC leadership and groups such as the Student Activities Board and administrative individuals.

“In fact there had been conversations had prior to the Diversity Forum that are still ongoing and we plan to continue as was mentioned by our representative, the first student to speak at the event.

“The administration is fully supportive and listening to us, and indeed some Deans have gone above and beyond our expectations with their support of our suffering community.”

Juan Manuel Calero Canavel explains some of the demands

The Tab spoke with Juan Manuel Calero Canaval, a Junior Religious and Latino Studies double major and a member of the BBC who was very involved in the drafting of the group’s demands.

Regarding prioritization of students of color, queer students and other marginalized communities : “Ultimately if you’re a marginalized community on campus, you do need more administrative and student resources. It’s harder to navigate these spaces with a very small and marginalized community. It may appear that there are a lot of students if you went to the forum on Monday or the rallies. But ultimately there’s only a five percent Black community on campus. There’s in theory a ten percent Latino community, but that demographic doesn’t explain whether they’re half-Latino, white-Latino, black-Latino— Latino is an ethnicity not a race. Ultimately, it’s people who feel excluded from the general dynamic of NYU and would like to be acknowledged and have a space for ourselves.”

Regarding a full-time central diversity staff position: “So the act of having students do interviews for staff on campus, especially when it comes to administrators who will be working with student groups, is an old procedure. A very common thing to do. So it’s not novel.

“Most of these demands are longstanding requests of the university from the past 10-15 years. We met on Tuesday night and put our respective lists together.”

We asked a number of questions regarding the creation of a specific lounge designated for Students of Color within Kimmel:

Will the lounge be exclusionary?

“Obviously no. If you’re a White student in the lounge we’re not going to kick you out. We’re not going to kick out students who don’t conform to these labels. We just want a space on campus so that if you’re a member of a marginalized community, be it Queer, be it Trans, be it a Person of Color, be it some other type of marginalization, that we have a space we can go to directly that we’re aware of, and where people who understand our struggle will be present.”

“We’re asking for a larger space for us instead of a lounge that only fits 20 people. NYU is one of the only schools that doesn’t have this. This is pretty old and should’ve been already present in NYU’s plans, but it wasn’t.”

Why is it necessary?

“Right now there’s on going police brutality that targets specifically Latino and Black communities. There’s on going discrimination around the country, be it racism or ethnocentrism. These are real institutional problems that exist in this university, as we heard in the university forum, and we just really need a place and a space where we can physically gather and express ourselves without fear.”

How would you respond to your critics?

“If you’re Catholic, you have a whole floor of GCASL for yourselves. If you’re Jewish and you want your own space, that exists as well. There’re spaces for Islam, Buddhism and Hinduism and other religious minorities on campus. We’re not against having discourse on issues, the reality is just that there are students on campus who faced police brutality. I was assaulted by a cop when I was 12 for trying to defend my mother from someone, and I had my face beat into the cement four times while I screamed ‘I am not resisting.’ These are realities a lot of students are living in, a lot of us are suffering, a lot of us feel pain, we just want a space to talk about our suffering without having people come in and say, ‘Oh your pain is dismissive, why can’t you get over it?’ Because this is a lived in situation. I feel a lot of the criticism any of these movements receive is basically a lack of understanding and sympathy for the genuine lived suffering of these peoples.”

Our report from last week’s listening session, by Edie Freedman

In light of recent events at the University of Missouri and Yale University, NYU held an all-university listening conversation last Wednesday in Coles.

Many students may argue over the true motive behind holding these talks but, to quote the email sent around to the whole university by Associate Dean of Students Richard Kalb, “The issues of diversity and inclusiveness are important matters for our campus to discuss.” These issues, along with many more grievances of NYU students, were brought to light on Wednesday afternoon. 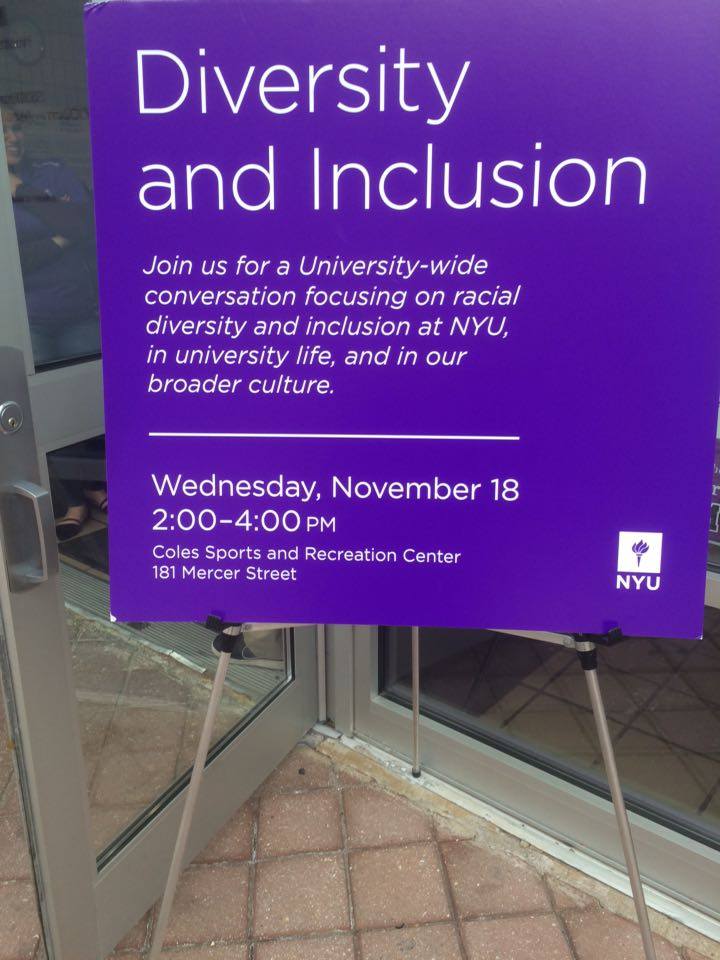 At the door, I was presented with a list of demands by the Students of Color and Black and Brown coalition at NYU which set the tone for the experience.

When I arrived, the discussion was just beginning. Soon enough, a line formed at the microphone of students who wanted to voice their complaints at the institution and the faculty. 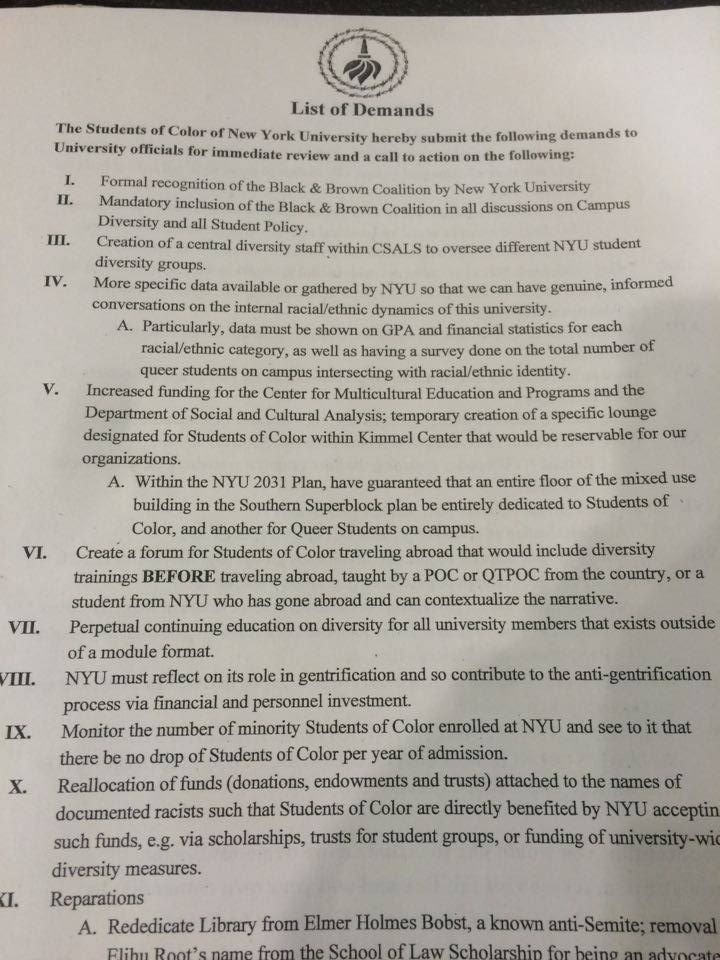 At this point, all NYU had to was listen. Here are some of the topics that came up:

Many students brought up the issues surrounding diversity and inclusiveness at NYU Global Campuses. Some talked about the fact that, from their point of view, many of the global sites do not interact with the local communities: students at NYU Tel Aviv are told to not go to Palestine according to one student, while another student recounted a story in which NYU Buenos Aires faculty confused the meaning of Halal dining, and had told his host family that it simply meant he could not eat pork.

“What is the global university without actively engaging in the communities?”

The diversity talk brought to light many grievances that NYU students feel towards the faculty at NYU and the ways racism and diversity are dealt with in the classroom. 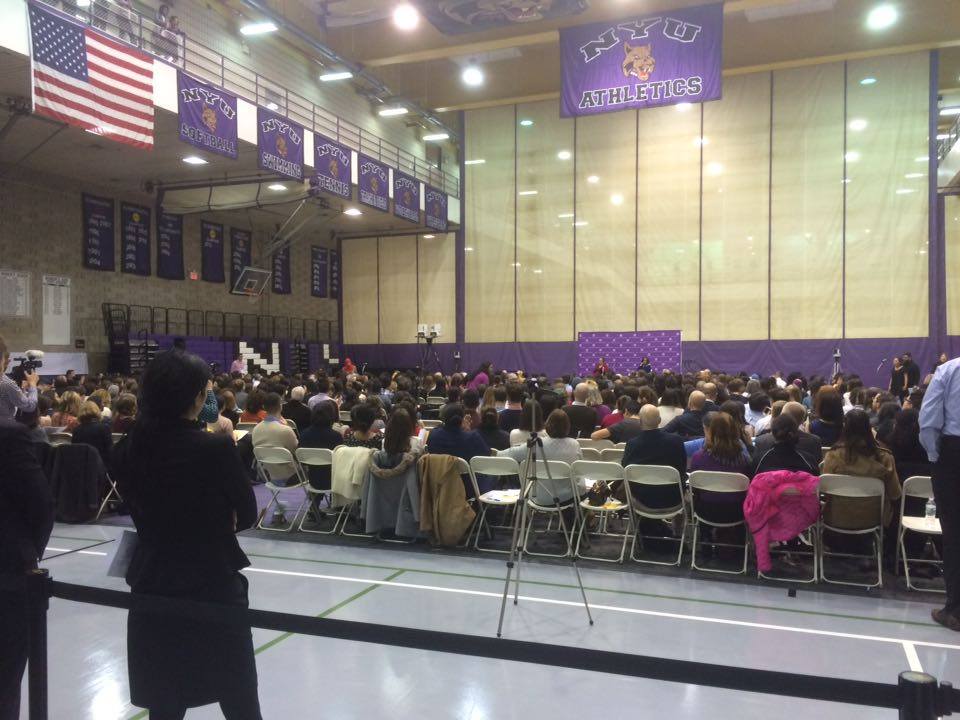 “Where are the faculty who should be here?”

Many told stories of times they felt a faculty member ignored racist comments made by students in the classroom, and how they felt it was the job of the faculty to step up and set an example for the students. This even caused a TA to speak up and ask what she could do to help:

“What can we [the TAs] do? How do students want the TAs to deal with racist/hateful speech in class?”

One student said: “I call for more faculty of color. I demand diversity training for faculty members.”

Another student spoke about the recent events in Paris and discussed her experiences with Islamaphobia, saying: “Everyone is telling us that after Paris we need to stand in solidarity like after 9/11. The last thing I felt after 9/11, as a Muslim, was solidarity.”

Whatever your thoughts behind the reasons for the diversity talk, or even if you thought the talk was just a way for NYU, in the bluntest of terms, to cover their asses, I can tell you from where I was standing NYU students of color and allies  finally had the opportunity speak their minds, and they weren’t going to let it go to waste