It packs a powerful message

All design majors at Notre Dame complete a major project of their own direction during their senior year, but senior Mary Kate Healey took hers further, creating a collaborative and provocative piece exploring the topic of campus sexual assault. Mary Kate chose to focus her senior design project especially on the issue as it pertains to Notre Dame and St. Mary’s.

Mary Kate’s work was considered human research by the university, and had to receive approval from the Institutional Review Board before she was allowed to proceed. Once it was declared ethical, she was able to begin her project. It began with a survey, collecting intimate stories of sexual assault from over 60 students on campus. 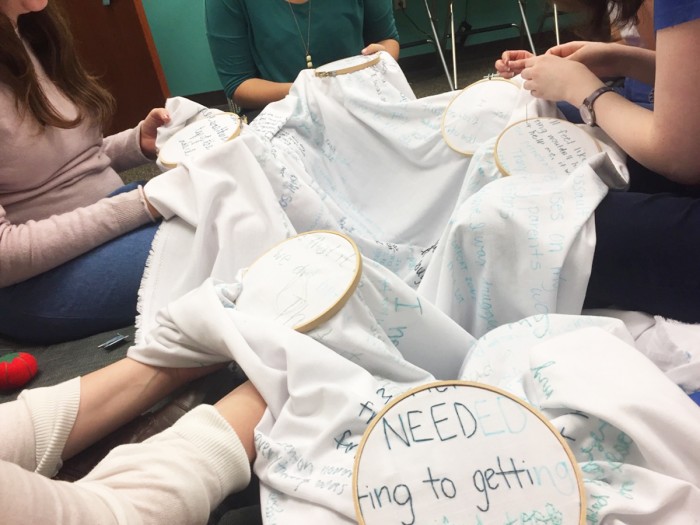 Once she had collected the stories, Mary Kate had the quotes written out on a white sheet measuring 9×4 feet, then went back and stitched the quotes into the sheet itself. She chose stitching in particular, she says, because it’s an example of a craft many women have always engaged in but was not always recognized as art. “There’s a lot of art history between women and the domestic craft,” explained Mary Kate in an interview with The Observer.

The choice of a sheet as the basic material, also, was not an accident – after all, in cases of sexual assault a bed sheet can represent a traditionally safe resting place being suddenly transformed into a dangerous place.

In order to maintain the collaborative nature of the project, Mary Kate has created a sewing circle intended to foster dialogue which has met several times already. The group will continue to meet and is open to those new to sewing as well as the more advanced.

For all those interested in viewing it, Mary Kate’s work will be on view at the Snite beginning April 7.