We may have lost Saturday, but Stanford’s band couldn’t even get in

If it makes you feel any better

Before we blew the Stanford game, I was actually pretty excited. Come halftime, I was ready to rest my legs and half-listen to the band. But, in my fairly coherent state, I noticed something peculiar: Stanford’s band was absent. I thought that was odd – most teams bring their bands to the away games. I asked around, and somebody mentioned something about Stanford’s band being banned. So, during my post-game depression, I did some digging.

We all know a class clown – the offensive, yet undeniably funny guy who makes jokes about everything from OJ Simpson to Catholicism. Stanford’s band is essentially a crazed, organized manifestation of this high school jokester.

Lampooning the schools on their roster, Stanford’s band is frequently banned from universities across the country. Here are some highlights: Urinating in public at Washington game; spelling “NO BALLZ” during an ’86 UCLA game; a performed polygamous marriage at the 2004 Brigham Young game; ridiculing Oregon for its endangerment of the spotted owl during a 1990 game.

My personal favorite: in 1994, 19 members went to the LA County Courthouse during jury selection for the OJ Simpson trial. During the USC-Stanford game that year, Stanford members drove a bloodied white Bronco around the stadium, mocking OJ’s infamous police chase.

Still, the band sometimes gets its comeuppance. In 1982, band members rushed the field too early during the final kickoff against Cal Berkley. UC-Berkley won, and this play today remains a great source of shame for Stanford.

And Notre Dame could not escape Stanford’s mockery. After all, who’s an easier target than Irish-Catholics? The band took no prisoners mocking both the religion and the nationality.

In 1991, a Stanford drummer dressed as a nun, conducting the band with a wooden cross for a baton. One young woman rushed the field, purportedly telling the drummer that he was going to hell. 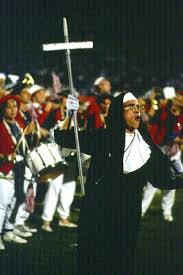 This got them banned for a few years. In 1997, they mocked the Irish as drunken brawlers, even joking about the nineteenth century Potato Famine. A two year ban took effect.

I couldn’t find Notre Dame’s official Stanford band policy this year, but it’s safe to say that these hooligans are not welcome at Our Lady’s University – or most universities, for that matter. I wonder, though, if the university could take a step back for a second.

The comedy is touchy at best, but would the band’s presence really be so harmful?

Sure, their halftime shows are offensive, demeaning, insensitive – “triggering,” even. But the antics of the Leland Stanford Junior University Marching Band are still damn funny. I’m sure many Notre Dame students would get a kick out of heckling this band’s hijinks, especially when we’re having a crappy season.

As a wise man once asked – if you can’t laugh at yourself, then who can you laugh at? 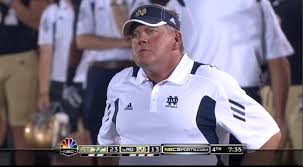